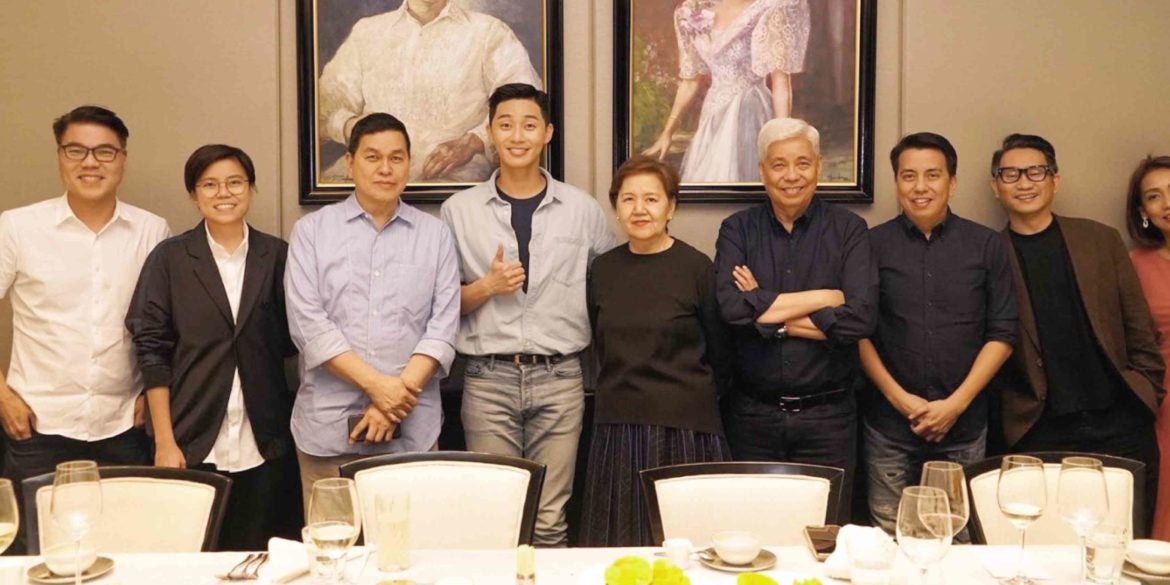 The shy Hallyu god would have wanted to go around Manila, got an Inquirer Guyito as a souvenir, and was in awe to see a legion of Filipino fans for the Bench fun meet

Korean superstar Park Seo-jun said he couldn’t believe that he has thousands of Filipino fans. They filled SM Mall of Asia (MOA) Arena on the night of Sept. 29 for the Bench Fun Meet, and their excited screams shook the venue.

“I wasn’t sure how many fans I have here in the Philippines. And I thought even if I had a single Filipino fan, I would be excited to go and meet this fan… I’m so shocked that so many of you showed up tonight,” Seo-jun said in Korean, translated by the ever-dependable and energetic host Sam Oh.

Seo-jun was truly in awe. The 31-year-old appeared bashful, not knowing how to react every time his fans screamed— the only way they could show their excitement at seeing their oppa in the flesh.

I expected to be starstruck when I met Seo-jun for the Inquirer Lifestyle’s one-on-one interview a day before the fan meet, because he’s a major celebrity. But I felt no superstar aura from him the moment we shook hands (his grip was firm, his hand was soft).

He was tall, slim, handsome, and when he smiled, he seemed… shy.

After greeting him “Anyeonghaseyeo,” I also said that in the Philippines, we greet each other with “Kumusta.” It means “hello” in Filipino, the young interpreter with us told him. Seo-jun tried to say “Kumusta” at least twice as he looked up to the ceiling, as if trying to remember the word before we took our seats.

I handed him the little Guyito stuffed toy and explained that it was the Inquirer’s official mascot. Seo-jun scrutinized it, smiling, and then pointed to Guyito’s blue vest that read “Philippine Daily Inquirer.” He looked at me, as if asking if this was the name of the media outlet I’m from.

When I asked on behalf of Super K editor Ruth Navarra how he would rate his sexiness on a scale of 1-10, Seo-jun laughed and felt embarrassed.

He looked at our list of questions and said, “Uhmm…” I suggested a 10. He laughed a little, then paused. “I’m sorry,” Seo-jun looked at me with a laugh. And we all laughed with him.

That was the kind of bashfulness that fans all saw at the fan meet. Park Seo-jun, Hallyu god, is still not used to the adulation.

It was quite a long wait for everyone who had anticipated this meet-up since April, when Bench founder Ben Chan announced on social media that Park Seo-jun is the latest Global Benchsetter.

Filipino celebrities and high society set were spotted at the fan meet. Comedienne Ai Ai delas Alas told Sam in a brief interview at MOA that she was overwhelmed Seo-jun was truly in Manila. Ai Ai, like every devoted Park Seo-jun fan, was on the verge of tears.

It’s not hard to fall in love with Park Seo-jun, currently one of Korea’s biggest stars. His wide acting range is complemented by drop-dead good looks. Seo-jun is consistently ranked among Korea’s top product endorsers, such that you’ll see his face all over Seoul.

Eight years after debuting in show business, Park Seo-jun shot to stardom—starring in one hit television drama after another. “A Witch’s Love,” “Kill Me, Heal Me,” “She Was Pretty,” “Hwarang: The Poet Warrior Youth,” “Fight for My Way,” “What’s Wrong With Secretary Kim” are among fan favorites.

Seo-jun movies do well in the box office, too, like “Midnight Runners,” and more recently, “Divine Fury.”

He likes to surprise fans with cameo roles, such as playing the grownup son of Son Ye-jin and So Ji-sub in the tearjerker “Be With You,” and Choi Woo-sik’s friend in “Parasite,” the first Korean film to win the Palme d’Or prize in the Cannes Film Festival.

In July, Seo-jun started his official YouTube channel called Record PARK’s. His videos draw hundreds of thousands of views. He has 8.8 million followers on Instagram.

The eldest of three boys, Seo-jun has shared pictures of himself with his young niece he adores. Fans love him for his tight bond with his family. The entertainment news site Soompi wrote that at Seo-jun’s first fan meeting in 2015, he cried after seeing his father in the audience.

At times, Seo-jun would share pictures of celebrity friends like Kim Tae-hyung (better known as V of the K-pop group BTS) and Park Hyung-sik, another Global Benchsetter.

A mainstay on Seo-jun’s Instagram is his bichon frisé, Simba. At the Bench fan meet, Seo-jun said Simba sleeps with him “all the time.”

“I take him on walks a lot. I feed him delicious treats. I hope that he will be with me for a long time because obviously I enjoy our time together,” he said.

Here are excerpts from the Inquirer’s one-on-one with Park Seo-jun:

Many Filipinos go to Korea now. What would you recommend for them to do, where to go, what to eat?

When I came to the Philippines, I wanted to go to the landmarks and famous places where I could feel and learn the history of the country. So, when you go to Korea, I guess it would be nice as well for you to go places that could give you the same feeling. I suggest places like Gyeongbukgung Palace or Si-cheong. I also recommend that you try not the fusion Korean food, but the real traditional Korean food.

You fought evil spirits in “Divine Fury.” In real life, do you actually believe in ghosts or spirits?

I do believe in such, because I experience a lot of sleep paralysis.

You recently celebrated your eighth year in showbiz. What have you learned about yourself in the last eight years, and what are your personal goals for the next eight?

First of all, I think that the eight years went by so fast. I hope that I haven’t made any decisions that I would regret when I look back. I’m the type to always think about what my limits are, and I hope that this isn’t my limit yet.

I also hope that in the coming days, if a point comes where I do feel like it is my limit, hopefully I would be able to face and overcome it. My goal would be to meet you all with good projects in the future.

(From the Fan Meet Slam Book segment with Sam Oh):

What do you think about Manila?

What are your fondest memories growing up in Seoul?

I had a very memorable and good childhood. Every moment growing up was memorable.

What can’t you live without?

My friends, because they are the people I share my good and bad times with. They are indispensable in my life. I don’t like fake people. This is something I learned over the years working in the industry. I don’t want to be around or working with fake people.

What is your favorite song?

Right now, I am listening to Jeremy Zucker’s “Comethru.”

What are you most afraid of?

Do you believe in destiny?

What did you dream of doing when you were a child?

To be a baseball player. But my parents allowed only my younger brother to pursue baseball.

How did you get into acting in the first place?

As I said earlier, I wanted to be a baseball player. In middle school, I did not know what I wanted to do. Then I met cosplay people. And being onstage with them, I had a weird feeling which made me think thatmaybe acting is something I could pursue.

I admire a lot of actors, but I am a big fan of Brad Pitt and Leonardo DiCaprio.

What are your favorite movies?

I’m a big fan of movies. I’ve watched many films but right now, I am into romance films. I am going back to a lot of classic romantic movies like “The Notebook” and “About Time,” which I enjoyed.

How do you keep fit for a role?

I exercise eight hours a day for three months before filming. I exercise, then go to a mixed martial arts studio, then have a meal, then go back to the gym for weight training.

What is your favorite sport now?

What makes you laugh?

I’m also not sure. (Then he laughed.)

Are you the joker in the family and among friends?

I’m the least funny one. I don’t understand why people think I’m funny.

What do you look forward to when visiting other countries?

The most important thing is to try the food. Sightseeing is also something I enjoy very much, and I am enjoying this sight [of the fan meet] very much.

What are the things you want to accomplish before you turn 35?

Are you teasing me? I’m not sure, because all my dreams came true tonight. —CONTRIBUTED