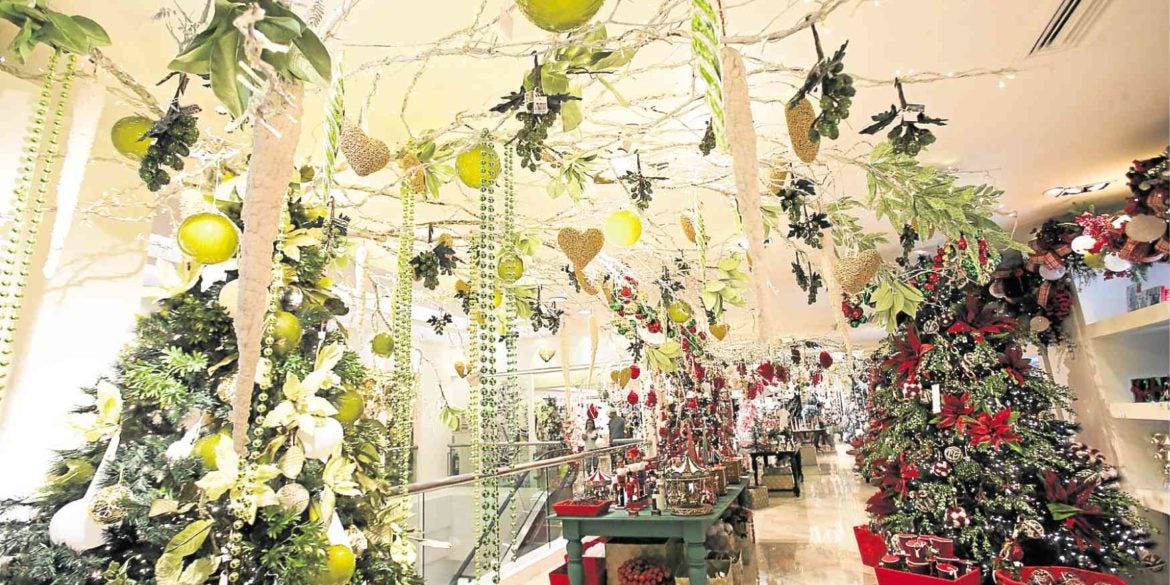 Zenaida and Marilen Tantoco talk about all things holiday

“Christmas season seems to start earlier every year,” said Zenaida “Nedy” Tantoco, the chair of SSI and Rustan’s, over a Moroccan lunch last week. She’s certainly not complaining, given how the 67-year-old luxury department store has long cemented its reputation for celebrating the holidays in high style.

All this is thanks to her visionary mother, the late Rustan’s matriarch Gliceria Tantoco, who trained her and her siblings to develop an eye—and ear—for what their customers want.

As early as mid-September, her sister Marilen Tantoco, Rustan’s vice president for merchandising, and her team unveiled the store’s annual Christmas Store.

The entire fifth level of Rustan’s Makati is now decked out in holiday finery, from snow-covered boughs to teddy bears in festive plaid. On top of the classic combos like red and green as well as traditional nativity scenes, they have come up with 12 new themes—each conceptualized as early as 10 months ago.

“We have a team that includes an artist and a buyer that attends holiday-theme foreign trade fairs where they take a sweeping look at the different items on display,” Marilen said. Based on what’s available and what looks fresh, they come up with a variety of looks.

“We have customers who come in, walk around the Christmas Store before finally choosing a tree,” Marilen said. “An entire tree complete with all the trimmings comes with a six-figure price tag.”

Rustan’s sends over to the customer’s home a visual merchandising staff to put together the tree because the customer wants it to look exactly the way he/she saw it in the store.

“One time, we tried to put together a tree in our house but using only a few decorations,” Marilen recounted. “We said we would just spend this much but when it was finally assembled, we didn’t like how it looked. We ended up having more decorations added because somehow it doesn’t turn out as nice if you scrimp on the trimmings,” she added.

Despite the arrival of newer, more fantastical decorations to choose from, the Tantoco siblings described their personal style as skewing toward the classic and traditional.

“I’m partial to the traditional with some native touches thrown in,” Nedy said. For Marilen, it’s red paired with another color.

For 40 years, Marilen has been buying for Rustan’s Home and credits her mother for teaching her everything she knows. “I didn’t know anything about buying for the home section, but she trained me to have a good eye for nice things. Also, when I’m buying I don’t think about myself. I think of my customers. It’s nice to listen to customers talk about what they like,” Marilen said.

So what do they like? “They’re always on the lookout for something new,” Nedy said. “This year, aside from the trees and trimmings, we’ve also brought in spinning fiber optic trees perfect for those living in condos.” The idea to carry the “lighted” trees was Nedy’s own. She met with their supplier and chose five trees that come in several sizes.

If you prefer novelty items, Marilen has filled an entire display table with battery-powered singing and dancing snowmen, puppies and candy-striped Santa hats. “I like them. They make me happy,” she said. In her home, she has around 30 on display.

“Christmas is a special occasion in our family, my mother made sure of it. We want to share that spirit with our customers,” Nedy said.

Their 98-year-old father Bienvenido Tantoco Sr. expects the entire clan to gather in his house on Christmas Eve. The second- and third-generation Tantocos arrive in time for the early evening Mass followed by dinner and the exchanging of gifts.

“We’ve also started a new tradition of playing tombola, a numbers game similar to bingo,” Nedy said. Her son, SSI Group president Anton Huang, is now the one who reads out the numbers and hands out prizes to the winners.

“He gives out bags from his top brands like Alexander McQueen, Bottega Veneta and Kate Spade,” Nedy said.