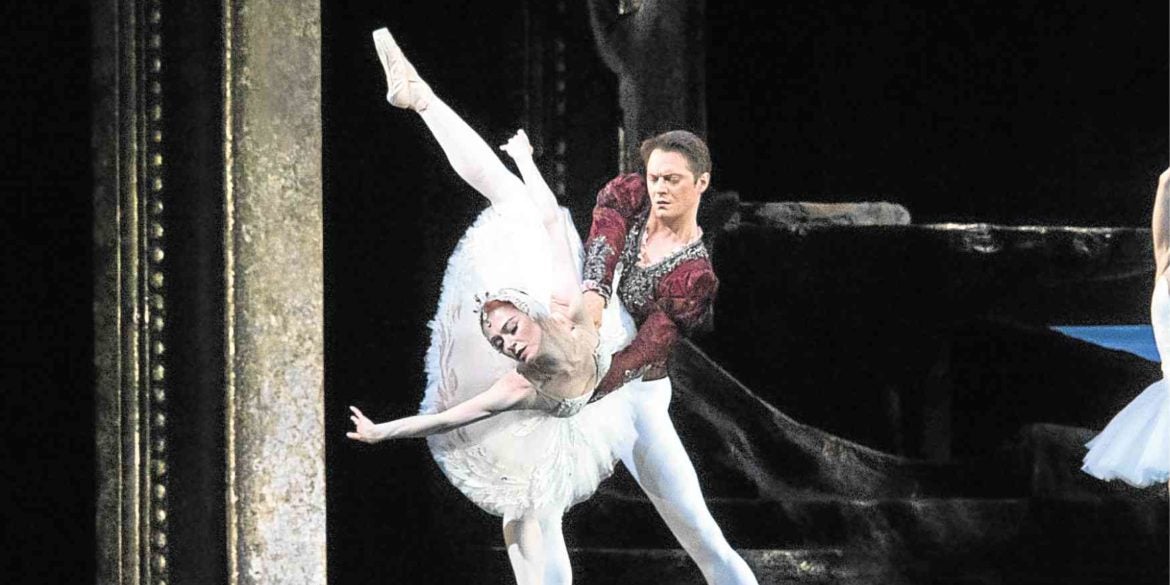 Ballet Philippines’ (BP) “Swan Lake” celebrated its golden anniversary at the Cultural Center of the Philippines. There were big names in the cast.

The Russian guest artists hailed from Mariinsky Ballet (formerly Kirov). As one of the world’s best ballet companies, it is famous for its mystique, borne out of its influence in ballet history and training from one of the most prestigious schools.

The resplendent sets of Broadway scenographer Eduardo Sicangco imparted rich architectural details in the palace scene. He added more visual depth in the lake scene and gave Rothbart, the evil sorcerer, a proper background of a cliff, to emphasize his stronghold on maidens who were turned into swans.

BP imported Jennifer Tipton, a well-known New York lighting director, to design lighting that brought together the dancers and the setting and created an atmosphere. If at all, the design was efficient.

At the gala, BP spent every drip of effort to make the dance fly. The audience felt the high energy from the company. The corps and other ensemble work showed strong technique and moved in synchronicity. However, we would have enjoyed it more had there been more nuanced dancing.

In Act 1, Prince Siegfried’s birthday outside the palace, Earl John Arisola, Katrene San Miguel and Monica Gana performed a killer version of the “Pas de Trois” without any slip-ups. It could have been more interesting if the dancing had contrasting dynamics.

“Pas de Trois” bordered on bravura when its mood was meant to be lyrical and sprightly. The waltz needed a pump of schmaltz. Playing the Jester to the hilt, Victor Maguad wowed the crowd with his smooth multiple pirouettes, buoyant jumps and comic expressions.

The much-anticipated scenes were at the lake and the palace, which focused on the Russians. Elena Evseeva played the dual roles of Odette, the Swan Queen and Odile, the black swan and Rothbart’s daughter who seduced the Prince.

Evgeny Ivanchenko portrayed Prince Siegfried, a role which had more mime and partnering and sparse dancing.

Evseeva took every technical challenge in stride. She made for a glowing Odette, impressing the audience with her balance of prowess and sensitivity and was deftly attuned to the music. Her white acts expressed both intensity and fear in her beating arms and love and remorse toward her Prince. The audience’s jaws dropped when she performed seven silken pirouettes that ended in a six o’ clock arabesque.

As the evil Odile, her bewitching splendor was at the service of deceiving the Prince Siegfried, and not merely brandishing her technique. She amazed the audience with her 32 whipped turns as she fluttered her arms.

As Siegfried, Ivanchenko was a classicist of great finesse and an attentive partner. He treated Evseeva with great delicacy. The mime scenes and initial encounter between Odette and the Prince at the lake were performed with clear intentions although he wasn’t as emotionally engaging as an actor.

In the “Black Swan Pas de Deux,” Ivanchenko swept the stage with his long limbs. However, his jumps lacked buoyancy and his hunched shoulders in the aerial turns were distracting. Moreover, the 6’4” dancer seemed aloof from the cast.

The corps de ballet as the swans swooped across the stage in impeccable, perfectly drilled unison, creating a design of well-placed limbs, heads and hands gracefully tilted. It made a perfect backdrop for Siegfried and Odile risking their love to free them from their misery. On the other hand, the famous dance of the little swans lacked the sharpness of the footwork and head movements.

At the palace party scene, the character dances were performed with energy, but the crowd scene lacked dramatic detail. The party guests didn’t seem sympathetic when the Prince realized that he was duped by Odile and Rothbart.

As Rothbart, Eugene Obile devoured the stage with his powerful presence. His only setback was the height. During the contrived confrontation between the six-footer Prince and a shorter Rothbart, it seemed like a no-brainer that Siegfried could easily rip off the villain’s wing.

The Philippine Philharmonic Orchestra’s playing was ebullient and in tempo despite sounding flimsy.

In all, the public was effusive and grateful to BP for bringing grandeur on the stage. —CONTRIBUTED