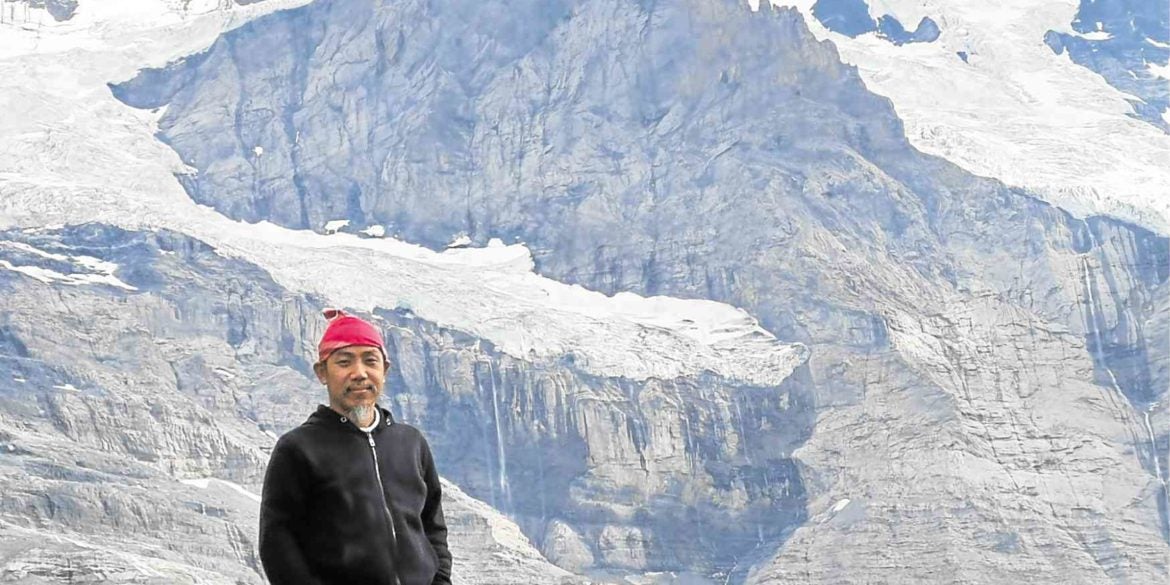 And here is another, nay, not just any other Mindanao story.

“Twenty years of work in communities, provinces and cities made me see beauty in all its angles and I am sharing the journey with my audience,” says Kublai Millan, the Mindanaoan sculptor and builder of monuments. He is, of course, well-known for his landmark giant works, Sultan Kudarat’s “Kampilan” in Maguindanao, the “Risen Christ” in the Tagum City’s Christ the King Church, and the giant durian monument in the Davao International Airport, as well as a giant eagle and Bagobo children at the People’s Park in Davao City.

The maverick artist now entices us to take a trip to his beloved heartland through an alluring exhibit simply titled “Triptych” which opened Oct. 1 at Gallery Nine in SM Megamall.

The exhibit features three series of exquisite paintings only Kublai could create, deeply rooted as he is in the communities of indigenous peoples of Mindanao. His art is whimsical yet complex, mystical yet engrossing, and very colorful and vibrant reminiscent of colors and textures of Mindanao.

Kublai’s art is contagiously happy, a contrast to the picture we usually make of Mindanao. For Kublai, all his gigantic monuments are inspired by his immersion in the communities, observing their ordinary lives, understanding their values and history, and in so doing, discerning their identity as a people in order to highlight their culture.

“But all the sights I see and all the lessons I learn through these immersions with my people,” he says, “I could not possibly depict in the public monuments that I make. They are simply overwhelming.”

But who actually is Kublai Millan? How could he create so much?

Mindanaoan composer, performance artist and singer Maan Chua, says of her partner for 14 years, “He values time more than anything. For him, 24 hours is not enough to do all the art he wants to do in a day.”

“But,” she hastens to add, “Kublai always finds time to hug and kiss the family first thing in the morning.”

Kublai studied at University of the Philippines Diliman and returned to Davao City in 1999. There he at first worked as a graphic artist. Then, he started sculpting, and produced pieces he installed at his family-owned Ponce Suites Gallery Hotel in Doña Vicenta Village.

Kublai got his first commissioned monument in 2002 from the provincial government of Sarangani for the newly constructed provincial capitol in Alabel. Kublai says, “In it, I highlighted the T’boli people and their musical instruments and dance.”

Many more landmark monuments followed, each one depicting a certain historical incident, like Typhoon “Pablo” in Davao Oriental and Compostela Valley in 2012. He built a memorial to the victims, and to uplift the spirits of the survivors. That was followed by “Candle of Hope,” in memory of the victims of Typhoon “Yolanda” in 2013 erected on the site of a mass grave. At Surallah, South Cotabato, a roundabout depicted interfaith unity among Christians, Muslims and indigenous peoples.

Again, Chua says: “He is a visionary. He is generous and wants to help as many fellow artists as he could.” He wants to create a sustainable and thriving Mindanao art industry. And he is starting to see his dream come true.

This month, the first Mindanao Art Fair will be held in Davao, thanks to a grant from the National Commission on Culture and the Arts through its National Committee on Art Galleries.

“The idea has been there forever,” says the 45-year-old artist. “That’s why we’ve been setting up group exhibits in malls since 2012, when we set up the Artists Helping Artists group.” To this end, they set up the Panag-abut Art Residency in September 2017 for art students and local artists. “We invited artists from Luzon and the Visayas, like Charlie Co and Manny Garibay. Following its initial success, we were inspired to go for a bigger gathering, beyond Davao City artists.”

Great ideas of a distinguished artist with a unique ability to seize the moment to produce works bound to be timeless. Kublai Millan! —CONTRIBUTED