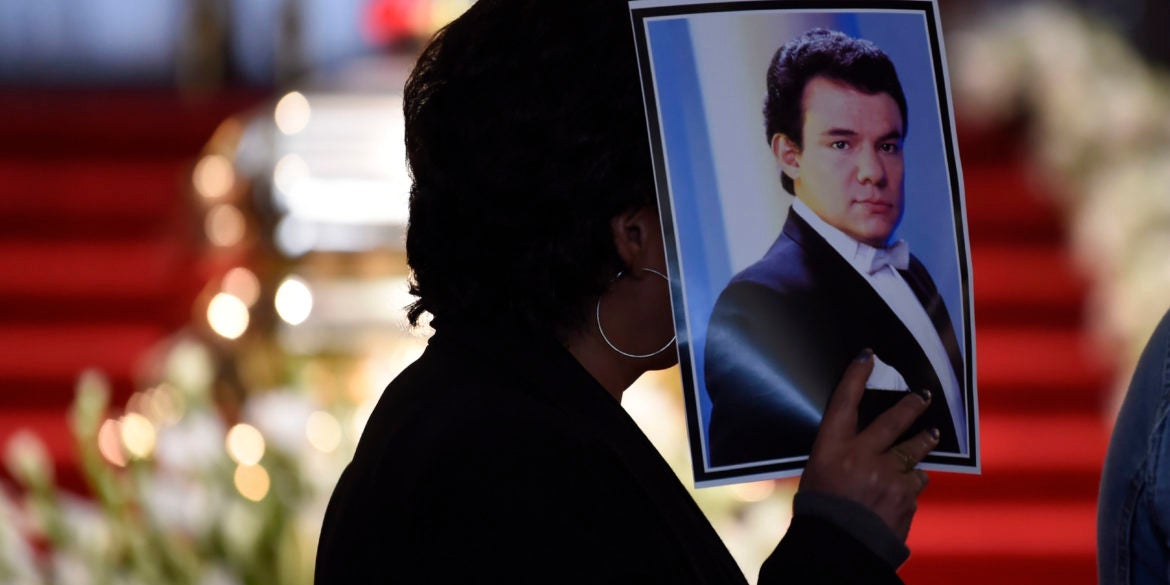 A person holds a picture of late Mexican singing legend Jose Jose during a tribute at the Fine Arts Palace in Mexico City on October 9, 2019. - The popular velvety-voiced Mexican crooner died September 28 in Miami, aged 71, after a long battle against pancreatic cancer. Over a 55-year career, he became one of the most successful performers in the Spanish-speaking world, selling more than 100 million albums and receiving multiple Grammy nominations. (Photo by Alfredo ESTRELLA / AFP)

The government said 15,000 people thronged the Palace of Fine Arts in the heart of the Mexican capital to file past a gold-plated coffin and cry for “The Prince of Song,” whose velvety voice and ballads of heartbreak made him one of the most successful Latin American singers of all time.

A Mexican air force plane flew Jose Jose’s ashes — half of them, anyway — to his native Mexico City from Miami, where the musician died of complications from pancreatic cancer on September 28 at age 71.

The other half remained in Florida, under a grudging deal negotiated between his eldest children, Jose Joel and Marysol, and their half-sister, Sarita, who lived in Miami with her father and initially resisted plans to bring his body back to Mexico.

In the days after their father’s death, Jose Joel and Marysol accused Sarita of hiding his body, seeking to get rich off his death and “putting on make-up” amid the family’s mourning.

They went as far as to file a police report, hire a lawyer and insist on an autopsy, before the Mexican consulate in Miami and President Andres Manuel Lopez Obrador himself intervened to mediate.

Under the truce brokered by the Mexican government, half of Jose Jose’s cremated remains stayed in Florida with Sarita and her mother — Cuban national Sara Salazar, who was the singer’s third wife.

Jose Joel and Marysol, who were born to Jose Jose’s second wife, took the other half to Mexico.

“We have brought back the heart of our beloved Prince of Song, my father. He’s home now,” said Jose Joel at the Mexico City airport, where white-gloved ushers placed Jose Jose’s coffin in a glistening vintage hearse.

Escorted by police, the hearse made its way to the Palace of Fine Arts, where the coffin was placed on a red carpet beneath a giant black-and-white picture of Jose Jose with the words “How sad it was to say goodbye” — the opening lyrics to his most famous song, “El Triste.”

“He was one of a kind, unique in all the world. No one can ever, ever replace him,” said Leticia Hernandez, 58, carrying a poster with photographs of the singer, as the National Symphony Orchestra played his classic songs in the background.

“He will live on in our hearts,” another mourner, 52-year-old Araceli Segura, said through tears.

The coffin was then brought for a mass at the Basilica of the Virgin of Guadalupe, Mexico’s patron saint.

Throngs of mourners also gathered at a statue of the singer in his home neighborhood, Claveria, for a collective outpouring of grief.

The hearse made a stop there, then brought the half of Jose Jose’s remains to the Panteon Frances cemetery, where they were laid to rest alongside those of his mother, a concert pianist.

Jose Romulo Sosa Ortiz, as he was born, sold more than 100 million albums in a career spanning over five decades.

He adopted the stage name Jose Jose in tribute to his father, an opera singer who was also named Jose, after his death in 1968.

Living under the constant gaze of the public, Jose Jose openly struggled with alcoholism.

He quit drinking in 1993, but health issues led him to give up singing as his voice gave out in the early 2000s.

Cover image: A person holds a picture of late Mexican singing legend Jose Jose during a tribute at the Fine Arts Palace in Mexico City on October 9, 2019. (Photo by Alfredo ESTRELLA / AFP)