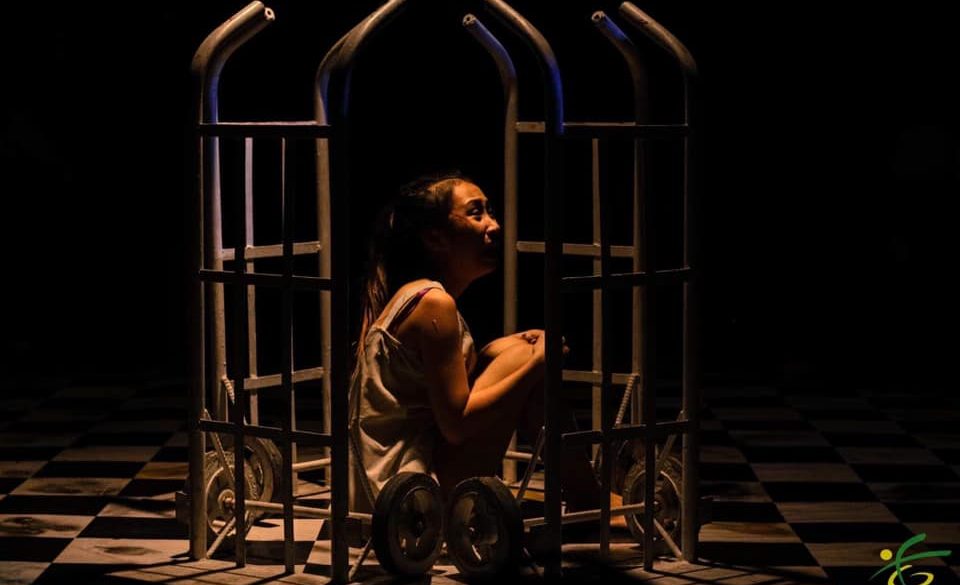 It is peak theater season, the metro rife with outstanding offerings from local companies. Yet, in this environment, smaller efforts from the campuses prove to be as much a part of the vibrant theatrical fabric.

Ateneo Blue Repertory’s “The Theory of Relativity,” by Neil Bartram (score) and Brian Hill (book), may have seemed a “small effort,” especially alongside bigger productions like the company’s own dazzler of a musical, “Spring Awakening,” earlier this year.

At 75 minutes, the material was slight and sometimes facile. It was not even a full-fledged musical, but a song cycle of tangentially connected vignettes about college kids with relationship issues. Yet in its modesty, it charmed its young audience with its relatability—a delectable coda to the month’s feast of musical theater.

“Theory’s” signal success was to serve as vehicle for an appealing cast who sang and danced with infectious heart and verve.

Director Andrei Pamintuan employed an evocatively economical staging, just large panels of mirrors that swung back and forth, plus a chair to frame the performers.

Not all the numbers worked equally well (and, incidentally, the relation to physics was of middling effect). But a quirky spirit ran through the mix of funny and more sobering moments that made an affectionate composite portrait of callow but heartfelt youth.

This was very much an ensemble show, but standouts included Joyce Buen as a girl with touch-averse issues and Jerome Chua as a pi-obsessed nerd, both characters playful devices that threaded the vignettes together.
And Davy Narciso had a haunting turn as a youth whose deeply felt story had an understated poignancy that rose above teenage angst.

Across the campus is Ateneo Entablado’s third staging of Tony Perez’s “Bombita,” which ends today.
Through the years, this iconic black comedy from the martial-law era has retained its pertinence with its oblique but mordant take on the military (a.k.a. authoritarian) mindset, indicative perhaps of how the problem continues to linger, in guises, from hazing to baleful national leadership.

The absurdist premise of the play—a squad of hapless military plebes tasked to transport a sealed box to successive, and increasingly senseless, destinations—presents the pitfall of being both too easy to play for broad comedy and challenging to draw out underlying themes.
Indeed, much of this production, under student director Danielyn del Rosario, tilts heavily to the former.

While this draws laugh-out-loud reactions from viewers, it misses space for reflective nuance. As the squad members bumble through their encounters with a cross-section of social actors—armed outlaws, commercial “ahentes,” media reporters—their pratfalls remain largely farce, rather than mining social satire.

Too, character individuation is hardly explored. The evening we watched, the show was instead stolen by a couple of cameos: Jan Rey Escaño as a hilariously flamboyant reporter, and VJ Serag as a manic driver in a vehicular collision.

Eventually, the production does rise above its screwball antics, especially as the eponymous Bombita (Robi Dizon) emerges from the squad’s collectivity as a person in his own right. Nevertheless, the bite of the play’s central theme—the senselessness of unthinking subservience—feels diffused.
The production may resonate well as entertainment, but not enough for its provocative potential.

In Manila is the Far Eastern University Theater Guild’s restaged “Makikitawag Lang Ako,” adapted by Risa Jopson from Gabriel Garcia Marquez’s short story “I Only Came to Use the Phone.”
A harrowing, Gothic tale of a young woman, Maria, whose car breakdown leads to her entrapment in an insane asylum and her estrangement—emotional as much as spatial—from her magician-husband Saturno, it is turned by director Dudz Teraña into an absorbing exercise in theatrical delirium.

Drenched in expressionist atmospherics, the production conflates the horrors (physical, psychological, sexual) of Maria’s sojourn in the asylum with the mixed yearning and rancor of her relationship with Saturno.
Some devices are puzzling (the need for namedropping from the current political scene may be questioned); while the shifts in perception of time and space, and the barrage of lush visuals, histrionic outbursts and gallows humor, threaten overload.

Yet, through it all, the core of a heartbreaking love story shines through, and that agonized irony of an ending, entwining horror and love, is devastating.

That such a conceptually ambitious tour de force is performed by, save for one alumna, a wholly student ensemble is double-edged: What could be gained in depth and complexity of interpretation from more experienced players is more than balanced by the sheer youthful energy and passion.

Karyl Oliva as Maria and Aaron Bayani as Saturno shine in their progress and final tragedy as thwarted lovers, despite their relative inexperience showing in the early goings-on (Oliva particularly hampered by the sassy street argot she affects at the start); and Kobie Hachero as Maria’s bête noire asylum warden puts on a star turn of memorably baleful evil that encapsulates this production’s dark atmosphere. —CONTRIBUTED