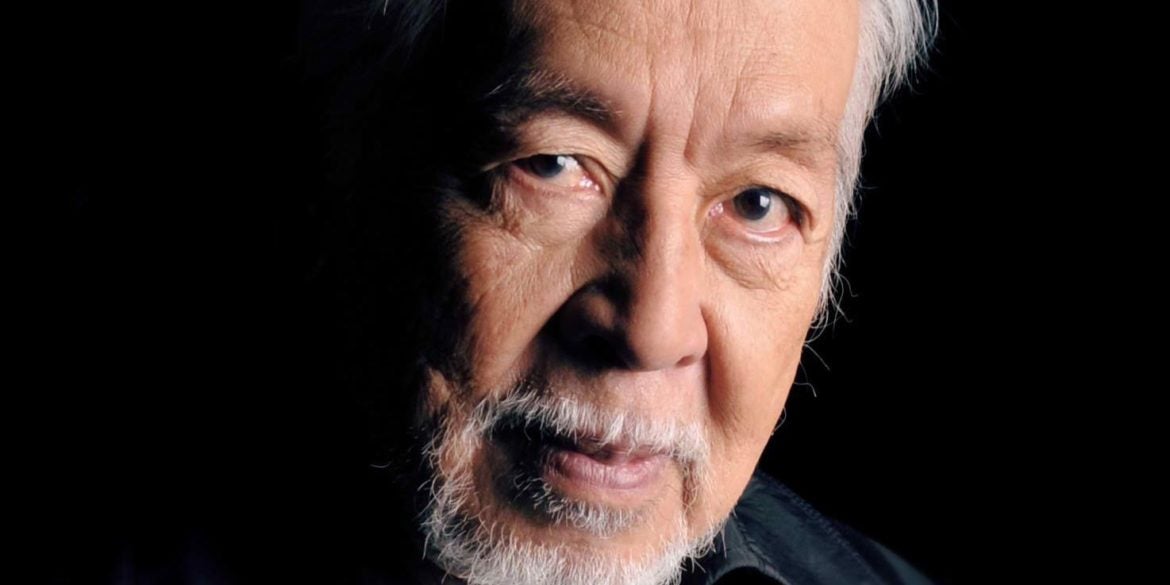 Listen again to the voice of a pillar of the arts

Inquirer Opinion editor Gibbs Cadiz was covering the theater scene in 2007 when he interviewed theater legend Tony Mabesa, then 69, and fresh from having directed a contemporized “Hamlet” for Dulaang UP.

The first part of a three-hour, freewheeling Q&A was posted on Cadiz’s blog (now defunct) in March 2007.

It is excerpted here in remembrance of Mabesa who died on Oct. 4.

It needs no belaboring who “Hamlet Redux’s” director is. Tony Mabesa is a multiawarded director, actor, playwright and teacher who, in over five decades of prolific artistic work, has become a lion of local theater.

“Under his firm, steady stewardship, Dulaang UP, the official performing group for theater of the University of the Philippines, has staked out a robust position as the country’s most consistent interpreter of Filipino and world drama, as well as the birthing ground for generations of artists and performers who have enriched Philippine theater, movies and TV.”

That was how I introduced Tony Mabesa in a feature on his then-upcoming “Hamlet Redux” in December last year. His last directorial work for Dulaang UP before “Hamlet Redux” was “Gabriela, an Oratorio,” which I chided in my review for being “neither particularly about Gabriela Silang nor an oratorio.”

Meeting him for an interview months later meant, as you could imagine, being nervous as hell, given Mabesa’s fiery reputation.

I had worried needlessly. Mabesa turned out to be a charming interviewee, overflowing with wit, practical observations and sparkling anecdotes culled from his 50 years of authoritative work in theater, film and television.

An august presence with his imposing frame and trademark basso profundo, he was also wry and matter-of-fact about his distinguished career.

Just three weeks ago, Mabesa received the Gawad Pinakamaningning na Alagad ng Sining from the province of Laguna for his lifelong toil in local theater.

At 69, he has chalked up over 150 plays, some 100 movies and TV shows, and countless hours spent coaching, coaxing, goading Filipino artists to give their best in every performance. There’s no stopping him yet, it seems. Good for us.

You’ve done extensive work in theater and film. How are they different from each other?

Let’s use Cherie Gil as example, whom I saw as the Baroness in Repertory Philippines’ “The Sound of Music” last year.

Cherie was wonderful onstage, I loved her. She had such a strong presence, though I thought she still had to develop that inner energy that stage actors have.

See, most film stars who go into theater don’t have it. Liesl Batucan had it—she even reminded me of Mary Martin [the original Maria Von Trapp].

Ang training sa movies kasi, you work for the camera. If it’s an extreme close-up, for example, you don’t do anything with your face, eyes, etc. Film actors are trained to hold back; they’re good at interiority, that sense of truth. If they don’t act truthfully, it would be picked up by the camera.

There was a time Behn Cervantes was doing this play with one of our senior film actresses, who tended to act from the neck up. (Laughter) She didn’t know what to do with her hands, so Behn gave her a shawl. That took care of it.

Your last major directorial work was “Hamlet Redux” for Dulaang UP late last year. How was that experience?

I was happy with it. I think the audience ate it up. I really wanted more accessibility for this play, though for some people—it was either you liked it or you didn’t. Ang mga bata, I think they liked it, so I’m happy about that.

The ending had Hamlet and Laertes fighting kung fu “Matrix”-style, instead of the usual sword fight. Why?

I’ve seldom seen onstage a rapier fight that worked. The actors are not equipped for it. Plus, the small stage of Guerrero Theater didn’t allow for that kind of movement.

But where’d you get the kung-fu idea?

I’d been seeing a lot of Asian movies lately! (Laughter)

Alam mo naman kasi ang ending ng “Hamlet,” so melodramatic, everybody dying, very Jacobean. I was thinking, eto na naman, what do we do with this? Somebody suggested, “Mag-arnis na lang tayo,” but that had been done two or three years ago. So sabi ko, i-try natin martial arts combined with black theater.

The black-light theater was, of course, an old tradition in Czechoslovakia. I was there in 2003 and watched a performance like that. It can turn gimmicky after a while, but I was thinking that, for most students, it was their first time to see something like that. Kaya pumapalakpak sila, tuwang-tuwa sila doon! It meant more to them. Kaya, o siya, sige, I’ll cater! At this point in my life I’ll cater! (Laughter)

Who’s the better Shakespearean actor for you, Gielgud or Laurence Olivier?

I think it’s a matter of taste. Si Gielgud was very lyrical, nobody could beat him in the delivery of lines. The great tradition of English actors—beautiful, mellifluous voice—kay Gielgud ’yan. Si Olivier naman, more earthy, more quote-unquote realistic. Of the actors that followed them, si Paul Scofield and Richard Burton sana ang rivals, but Burton was very soon grabbed by Hollywood. Wala na.

What’s the most memorable play you saw in your youth?

Quite a few. “Marat/Sade” with Glenda Jackson as Charlotte Corday, in London. Maggie Smith as Hedda Gabler, with her looong English neck. (Laughter) “Hedda Gabler” is the “Hamlet” for women. Theatrical lore says actors should do “Hamlet” before their 30s, and actresses the Hedda Gabler character.

Maggie Smith was just beautiful, she was like alabaster, very pale, very English that way. It was a production by Ingmar Bergman no less, directed for the National Theater in London.

Of the generations of theater people who trained with you in Dulaang UP, Irma Adlawan and Shamaine Centenera-Buencamino are often mentioned as the crown jewels. Do you agree?

What attracted you to her? What told you that she could act?

(Long pause) Ewan ko! (Laughter) Basta I was casting for “A Midsummer Night’s Dream” that time, 1983, and I told her to go to the audition. She came, and ’yun na. Ay naku, crystal-clear ang English! She hadn’t acted at all yata before that, but she became the toast after.

Where’d you get the eye for spotting talent? And what qualities do you look for?

There are people kasi na gusto mong tingnan. For me, an actor should be somebody that you’d like to look at. There are plays where you look at only one actor, you follow him because there’s something about him, or her—that X-factor or whatever. I’ve discovered some actors who were just walking here along the hallways.

Have you ever cast somebody who was interesting-looking but who turned out to be a poor actor?

Oh yeah, many times! You are very kind with your words! (Laughter) You see, this is an academic theater, we’re here to train people.

If they come to audition, and there are enough roles, we take the risk. It’s not easy to audition, you know, so I give them the chance—unless totally hopeless talaga. I bring them in, they can play the Puta 1, Puta 2 or Puta 3, or Manggagawa 1 or Manggagawa 2. (Laughter)

What basic qualities should an actor have?

They don’t have to be really beautiful or handsome, just that they have that extra something. Wilfrido Ma. Guerrero called it “personaleete.” “He has no personaleete,” he would say. (Laughter)

More than anything, I like actors who are hungry to learn, who can work with other people, who are not difficult. I’d rather work with a less talented but hardworking actor than one with airs. Diyos ko, ambabata pa me “aire” na, teka muna! I tell them, “Huwag kayo ganyan, malayo pa lalakbayin ninyo!”

I tell them straight to their faces! That’s the advantage of being older! (Laughter) Cut them down to size! “O, ikaw ha, nag-uumpisa ka pa lang, napakalaki na ng ulo mo! Ang mga sumisikat, the great ones, they have humility.”

That’s what one has to develop as an artist—humility. If you want to stay long in theater or the performing arts, have humility.

I tell them, “Galangin ninyo ang teatro. Trabaho ’to! The theater is your altar. Hindi ito picnic.”

Wouldn’t you say that’s a built-in attribute among most artists, a certain kind of madness that—

Oh, I love madness! In fact, when they ask me what is necessary for the theater, I say, passion and madness. Lalo na dito sa atin na ang hirap to practice theater. What I don’t like is what is called “arestrada” in Spanish—“mucho arestrada.” Pa-artsy-fartsy! ’Yan ang ayoko.

But theater is full of people with big drives and egos and personalities, right?

Yes, we always attract people who are kind of dislocated or disturbed! It’s very common, and I say, hay naku, I’m not fazed by you, because I have a master’s degree in Special Education… Seriously, those who work hard and go beyond being flashy are the ones who last long and make a name for themselves, rather than ’yung mga maaarte, those with a chip on their shoulder—“I’m an artiste!” yung mga ganyan! (Laughter)