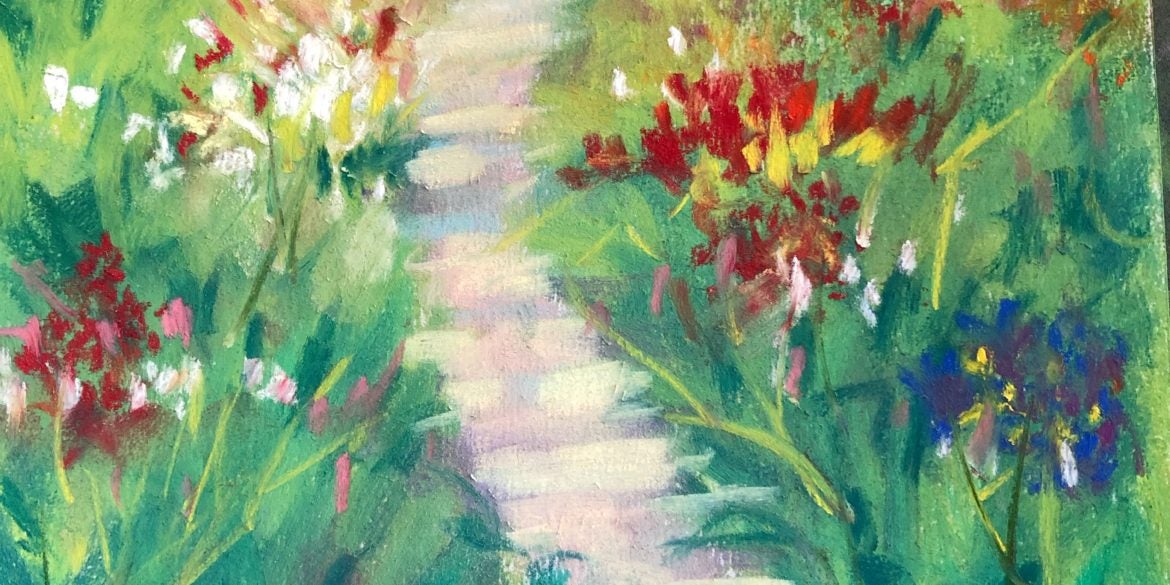 “Road to Heaven”: “I had been thinking about several friends who had departed this world, and those were awaiting their time. I imagine how lovely and serene the pathway to heaven must be.”

By age 55, some women are already thinking of slowing down. When you’ve done as much as my friend Cathy Babao has, you get new ideas—gentle ones, but new nonetheless.

One of the country’s most well-known and specialized grief counselors, Cathy took the pain she experienced with the death of her son Migi of a heart ailment at age 5 in 1994, and transformed it into a momentum to help others.

She built Migi’s Corners, reading and playing areas in children’s wards of public hospitals, and pursued studies on the dynamics of grief, earning an MA in Family Psychology and Education at Miriam College, as well as specialized studies at the University of Indiana.

Her work gave her recognition as one of The Outstanding Women in the Nation’s Service (Towns) for Public Service in 2004. In fact, her MA thesis was her first acclaimed book: “Between Loss and Forever: Filipino Mothers on the Grief Journey,” published in 2012.

A mutual friend recently described talking to Cathy, with her even, mellow voice and open demeanor, as the auditory equivalent of popping a sedative to calm you down.

Today, Oct. 13—three days before her birthday—Cathy opens her very first painting exhibit, a solo show called “Road to 55,” at the Fundacion Sansó, what she calls “a collection of images that stand out from my 55th year. ‘Road to 55’ was initially a hashtag that I made to curate my thoughts on Facebook and Instagram leading up to my 55th birthday, but I guess God had other plans.”

There are 15 paintings, all done in soft pastel, all 9” x 12” works and mainly florals, seascapes and gardens.

Art was never her strength, recalls Cathy, although she writes a regular Inquirer Lifestyle column called “Roots and Wings,” and is the daughter of film and TV actress Caridad Sanchez. “I tried to do watercolor maybe five years ago, but it was a semi-disaster!”

Around the middle of 2018, however, she was drawn to the idea of picking up pastels, and first studied with her cousin, art teacher Iris Babao.

From the start, 2019 has been a stressful year, however, she recalls. “I knew I needed to find something to preserve my mental wellness. On Facebook I would see the beautiful works of my friend, Chit Mijares-Chua, who was part of a Friday painting group, and she invited me to join.” Cathy hasn’t stopped painting since, mentored by visual artist Roland Santos.

Everything about her art is nurturing. Pastel, Cathy notes, “is the most forgiving medium. You make a mistake, and you can begin again at any point. And sometimes, the mistakes are what add depth and color to the final work. When I think about it, it’s a lot like my attitude toward life.”

Often surrounded by the ocean and flowers on her travels, she picks these images up, live or from photographs.

The paintings themselves are like a visual hug. There are petals painted with soft, generous brushstrokes, pops of lovely color—and, always, an appropriate inspiration behind the image, such as a quote by Maya Angelou or Malala Yousafzai, or a positive concept.

Now Cathy calls Fridays her sacred space for art. As a counselor dealing with much sadness and pain in people, she has found in art the ideal uplifting therapy.

“If you don’t know how to take care of yourself, the sadness can engulf you, mauubos ka. I was drawn to art as a way to help myself, so that I could continue the work that I do for others who are in deep grief. I pour myself into the piece that I work on, and pray that the final outcome will bring a sense of peace, joy or calm to whoever sees it.”