The invitation from Tony Mabesa that changed my life | Inquirer Lifestyle ❮ ❯ 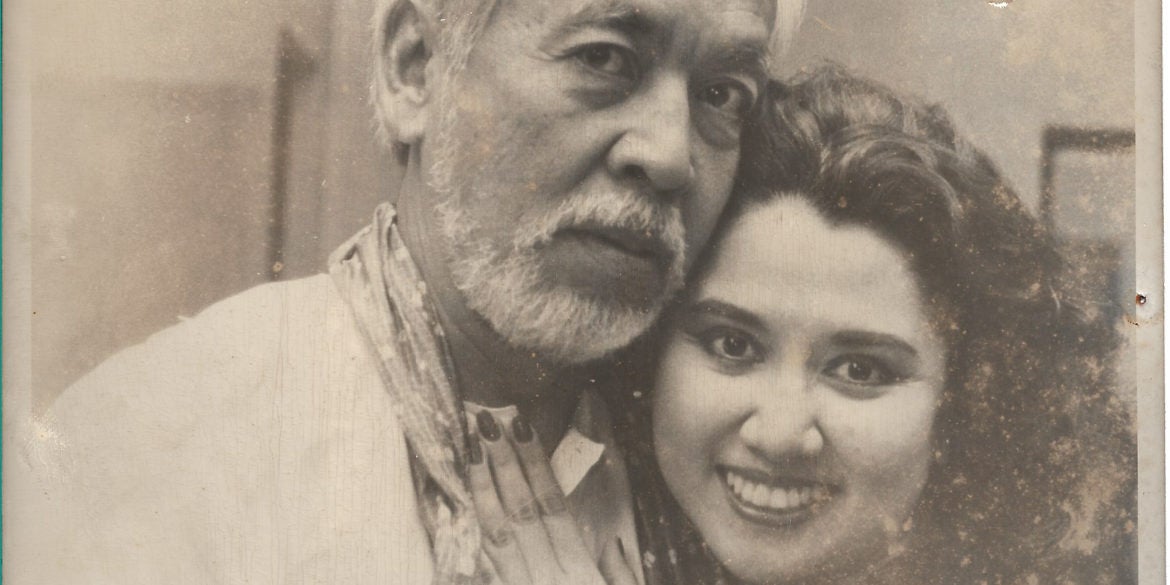 Tony Mabesa and the author backstage before a performance of “Fili,” in 1991

The invitation from Tony Mabesa that changed my life

He made a fist and placed it against my chest. ‘Find your truth,’ he said. ‘Take it from here’—then he moved that fist up to my forehead— ‘and then here’

At “Tonight for Tony,” the tribute and necrological service for director, actor and pillar of Philippine theater Tony Mabesa last Oct. 9 at the Wilfrido Ma. Guerrero Theater, the home of Dulaang Unibersidad ng Pilipinas (DUP), colleague Dr. Anton Juan referred to his longtime friend as “a lion as well as a lamb.”

I sobbed uncontrollably, and I wasn’t alone; this truth hit home for many of us whose lives had been changed in one way or another by this man’s genius.

He was a holy terror, flying into a legendary rage when an actor or crew member showed disrespect for the art that he lived and breathed. He did not mince words, colorfully pointing out what he didn’t like: “Alya Honasan, stop using your boses k—i! Find a lower register!” (Yes, we all got it from him, and it taught us humility and perseverance; aspirants who can’t handle the age-old hierarchy of the theater should really find their destiny elsewhere.)

When I showed up hoarse for a play reading once, however, he exclaimed, “I love it! A cognac-and-cigarettes voice!”

I felt an incredible loss precisely because I am not a full-time, trained theater professional. Yet, Tony held open the door of this art form for me, a half-baked actor, a visitor, and gifted me not just with valuable lessons and unforgettable experiences, but also with affection and 30 years of friendship.

And it all started with an invitation.

In 1989, we were shooting a commercial for San Miguel Beer (SMB) on board a barge sailing the Pasig River, with fireworks exploding in the night sky. SMB’s advertising agency liked to invite friends from media, the arts, and other fields, treat them to booze and food, and film the happy proceedings for TV ads. I was all of 26.

Of course I had heard of him. “Have you ever acted on stage?” Tony asked me. I had done so in college at Ateneo. “I think I have a role for you,” he said. “Come naman to UP.”

“When are auditions?” I asked.

He looked at me with his famed side-eye (read: irap)—a tall, impeccably dressed patrician gentleman with a booming voice, holding a cigarette—and said, “No na. The role is yours.”

I was intimidated as hell, and didn’t think he was serious. A couple of weeks later, I received a call and a script: I was Helga, the unsuspecting wife of Rene Gallimard in the Philippine premiere of David Henry Hwang’s “M. Butterfly”—and I was not given the option to say no.

I showed up for rehearsals at UP’s Faculty Center studio, petrified of my legendary leading man, Behn Cervantes, who would also become a friend.

But from day 1, I was blown away by Tony’s vast knowledge and contagious intensity. Those huge eyes focused so unflinchingly, it took a few rehearsals for me to become comfortable under that gaze. He leaned forward in his chair, lighting cigarette after cigarette. And he would get up and show everyone how to do a role—any role, male, female, lighthearted or dramatic.

He knew what he wanted, but he allowed you to do it your way—and you knew, even before he roared approval (“a-YAAAAAAN”), when he liked it.

Then I got a one-on-one. In one scene, after learning of her husband’s infidelity, Helga stands up and shouts, “Sh-t!” Tony wasn’t happy with my exclamation, and made me repeat it more than 20 times.

He rushed onstage as I braced myself for a dressing down, but instead, he made a fist and placed it, slowly but firmly, against my chest. “Find your truth,” he said, almost in a whisper, eyes blazing. “Take it from here”—then he moved that fist up to my forehead—“and then here.”

“M. Butterfly” was staged in 1990 and was a huge success, and we brought it to several cities in the Philippines.

High from the experience, I jumped into my next play, my most memorable under Tony, and in my book, one of his best: “Mga Bakasyonista (Summerfolk)” by Maxim Gorky.

He had the cast—which included such Mabesa babies as Floy Quintos, Tess Dumpit and Teroy Guzman—perform from behind a black net, adding incredible ambiance, and forcing us to project like crazy.

Oh, and as a neurotic, snuff-sniffing old maid, I was commanded to learn a Chopin piece and play it on the piano, my back to the audience. In period costume. While reciting poetry. In Filipino.

During the production, I was also romantically entangled (!) with a co-actor. “My God!” Tony exclaimed when he learned about it. “What will I tell your mother?”

During one show, as I cried backstage over relationship drama, I heard heavy footsteps climbing the narrow winding staircase up to Guerrero Theater’s tiny women’s dressing room. After giving me a hug, he repeated that gesture with his fist. “Use this onstage,” he commanded. Of course it worked.

Tony knew how to make things work. For the same Russian play, worried that the material was unwieldy, he did the unthinkable: He cut the play by several minutes, and fiddled with blocking and lines, a few hours before we were to open.

The cast and crew were ready to mutiny, in panic. The adrenaline led to an absolutely electric performance.

After the show, over beer and pizza at DUP haunt Shakey’s on Katipunan, Tony exploded. “How dare you not trust me. I trusted all of you. Especially you, mga anak ko kayo, mahal ko kayo,” he singled out former students Tess and Floy.

Then he looked at me: “Ikaw, malapit ka na rin.”

I was stupefied; remember, this was only my second play for DUP. “This is acting on the edge of the precipice,” he lectured us—by then, a table of bowed heads. “And I knew you could do it. How dare you!”

Then, in a blink: “Ayun, tapos na. Can I have another beer, please?”

I would appear in seven plays directed by Tony Mabesa, two of which went on a national tour, and one which represented the Philippines at the Asean Theater Festival in Bangkok, Thailand, where Len Ag. Santos and I decided to ditch our undies for a drunken scene.

“I had to put my face in my hands,” Tony told us later, laughing. “I blushed!”

Maybe it helped that Tony was a dog person, too, who fiercely loved his gorgeous chow chows Chimra and Gabby. When my own dog Banana died while we were in rehearsals for “Fake” for the UP Playwrights’ Theater in 2011, Tony brought the two along.

“Makikiramay daw sila,” he told me, dead serious. He dropped their leashes, and true enough, the two dogs walked up to me for a cuddle.

Tony the theater maverick was a latecomer to Philippine show biz, an industry introduced to him by good friend Joel Lamangan. Not only was he delighted and even starstruck at the beginning, but the UP professor was soon making a good living from his forays into film and TV.

I saw Tony buy a car, hire a driver and travel with friends, throwing around scarves he had collected from Peru, Cambodia or wherever he had recently been.

The scarves became a trademark, added to an always immaculate ensemble. And he always smelled wonderful because, he said, “I don’t want to be amoy lupa when I grow old.”

Through the years, I was one of the recipients of his famous occasional morning calls, praising me when he liked an article I wrote (“Ang ganda-gandaaaa!”), or saying so when he didn’t.

He called when he learned I had cancer in 2013; when he saw me with a bald head and a mask, watching one of his plays, he held me by the shoulders and gushed, “I am sooo happy to see you.”

I am first and foremost a writer; the written word is my primary medium. Still, when Tony guided me to levels of theatrical excellence I had only read about, every stage of the process became a peak human experience—long rehearsals, learning lines until we could say them in our sleep, standing in the spotlight, throwing our voices, and yes, our truths to an audience that believed the journey we were taking them on.

In the theater, onstage, I always felt fully, wonderfully alive, and it was Tony who gave me that gift.

I couldn’t stop crying when I heard of his death. It felt like an entire, precious part of my life had just folded up, and had ended forever.

Maybe it has, in a way. I have sent Tony birthday flowers every Jan. 27 for the last seven years or so. He always gushed about the “tropical jungle” that arrived in his home on Bernardo Street in the UP campus.

“Paano na, Ma’am?” asked my florist when I ordered the bouquet for his urn. “Wala na tayong papadalhan ng ‘As always, with much love’”—which was how I always signed the card.

It would be a staggering injustice if he did not become the country’s next National Artist for Theater.

Driven by his reverence for this “elusive, ephemeral art,” as he called it, Tony Mabesa took our hands and led us to the precipice—and buoyed by his guidance and love, we never fell off. We flew.

And I will hold you in my heart with love and gratitude, dear Tony, until my own cue to exit the stage.