MANILA, Philippines — Imagine Jesus Christ, bearded and wearing a white tunic, taking a “groufie” with a gaggle of 21st-century youngsters. The Son of God stands in front, his right arm holding aloft a smartphone that flashes as they smile.

This image is the latest in a series of more than 20 oil paintings that Fr. Armand Tangi of the Society of St. Paul (SSP) calls “Emmanuel” — to stress that “God is with us.”

Since 1986 Tangi has been painting Jesus, immediately recognizable with medium-length mane and facial hair, in the most mundane settings — driving a jeepney and calling out to would-be passengers, dribbling a basketball for a team called “Superstar,” or leaning on a motorcycle (aptly captioned “Godspeed”).

By putting Jesus in situations more quotidian than religious, Tangi hopes to integrate him into pop culture and make the faithful realize that God is accessible, able to assume human roles, and is “with us in everything except sin.”

Thus, he paints Jesus in a setting that involves a smartphone and an activity very familiar to young people.

“Nowadays,” he observes, “the first thing kids do in the morning is check their messages, especially Facebook. Before going to sleep, they do the same thing. Sometimes they stay up all night with eyes locked to the screen.”

Tangi agrees that technology has become a necessity. He sees its many potentials as an instrument to “be used in a positive way,” but he thinks it should not be allowed to take over one’s life or to take the place of one’s faith.

He remembers his late mother, Gregoria, telling him as a child “to give up everything but not one’s prayer life.”

“We were taught that the first and last thing to do in one’s day is to pray, give thanks and ask the Lord for guidance. When we allow technology to take over, we lose our values,” he says.

Now 66, Tangi says he is saddened when he reads news of young people taking their life when faced with what they believe is irreparable despair.

“When we lose our values [for other things] … it reflects a lack of faith,” he says. “And the moment we lack faith, we lack hope. Young people might be easily discouraged and end their lives [because of this].”

Tangi, who received a certificate in fine arts from the University of the Philippines before entering the seminary, maintains that Filipinos are among the most prayerful people in the world. He says his paintings are also aimed at preserving this.

He recalls a pilgrimage to the Middle East where the middle-aged, non-Catholic tour guide talked of encountering Filipino travelers.

“Filipinos are a happy people,” he quotes the tour guide as saying. “When we have problems, we go to the bar and drink, try to forget the problem, and it’s still there when we wake up the following day. You Filipinos, you pray and are confident that your prayers will be answered, that your problems will end. Because you rely on the Lord.”

Tangi says he wants an image that will constantly remind all, especially young people, that “no matter what happens in life, the Lord will always be with you, even during challenges.”

He adds: “After Good Friday, there is always Sabado de Gloria, and then Easter Sunday. Imagine Jesus taking a selfie with you? He is saying, ‘Be with me!’ He wants you in the frame with Him!”

While his paintings usually receive favorable feedback, Tangi says he expects adverse reactions to his latest work now that the media arm of the SSP has translated it into a poster sold in the society’s bookstores. 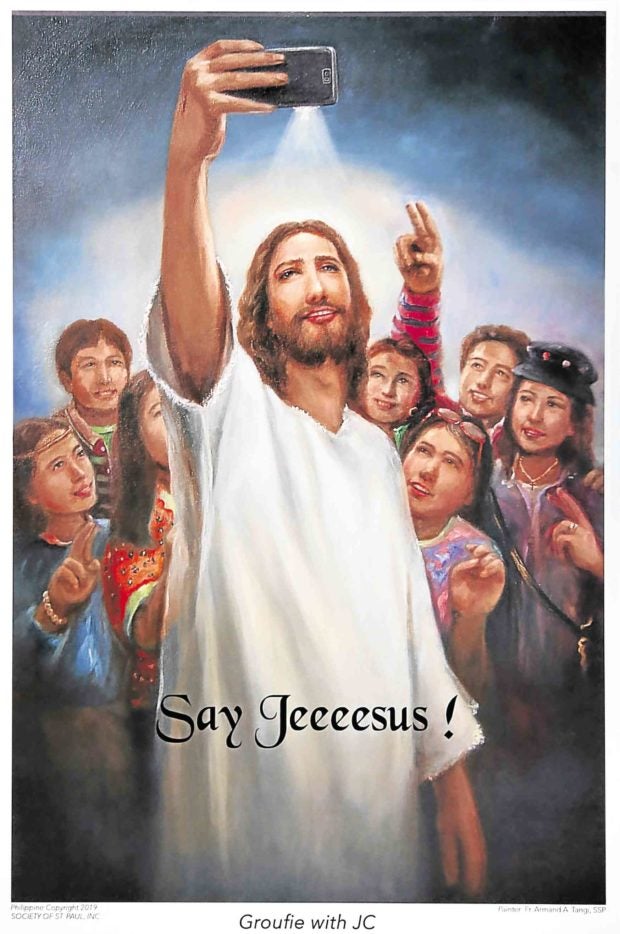 When SSP Inc. distributed Tangi’s first Emmanuel painting captioned “Laughing Christ” more than 20 years ago, the harshest and most numerous attacks came from members of the religious: “Ang daming atake sa akin. Hindi ma-accept that God has a sense of humor. I mean, I believe that when Jesus was [on earth], one of the things that attracted [his followers was] his sense of humor. There would have been instances when he was cordial and funny because if he were [grumpy], why would his followers even approach him at all?”

Tangi cites the biblical story of the wedding feast in Cana, where Jesus turned water into wine, as an example of his fun side: “He attended a wedding, a happy occasion. Of course, he had fun! There was drinking, laughter, joy, cause for celebration, a wedding day! My point is, true joy comes from the Lord. If the Lord is with us, we can also bring that true joy that now emanates from us to other people.”

“Laughing Christ” eventually gained traction. A taipan who owns a large brewery in the country even pirated the image and turned it into a freebie calendar. For their holiday giveaway, customers chose between Jesus and a half-naked woman holding a whisky bottle. A furious nun sent a handwritten letter: “Father, are you not ashamed to portray Christ like this in your store?” A Cebu-based priest said “Godspeed” was “blasphemy,” and another from Makati called Tangi’s work “a great insult to Our Lord Jesus Christ,” warned him that he would be “answerable to God,” and must stop selling posters “while you still have time.”

But Tangi would rather listen to the positive reviews. He says most of his critics belong to the older generation that insists on Jesus as “a distant God, unreachable—doon sa malayo—somebody very serious and needs to engage in a stiff relationship.”

He adds that as much as Jesus appreciates the prayers taught by the Catholic Church, “we can always talk to him as we talk to each other, and also allow God to talk to us.”

Businessmen have been more welcoming of his work, Tangi says. He has seen “Godspeed” printed on T-shirts sold on the sidewalks of Divisoria, and, on a visit to a Taiwan hospital, he was amused to find posters of his painting of Jesus in a doctor’s coat tending to a sick child on nearly all the walls.

“I also watch movies and see my works as posters in the background,” the priest says. “I don’t plan to run after those who pirate my works. My aim is devotional. People put them up because they believe. Meanwhile, I will keep praying for more inspiration.”

Martirez, now guest bishop of Christ the King Parish in Greenmeadows, Quezon City, says Tangi’s works are “very much in demand in religious houses” and “displayed in many churches.”

The portraits of Jesus “in modern settings, like the basketball player and the guitarist,” are among those the bishop finds beautiful.

Martirez says Tangi promised to give him one of those paintings, “but I think he has forgotten.”