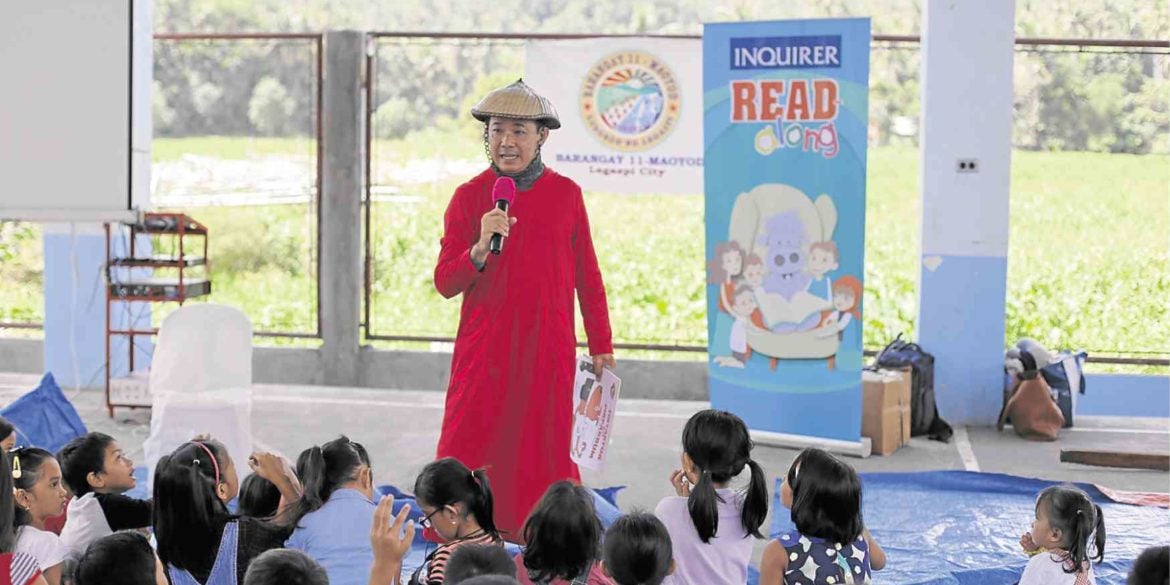 LEGAZPI CITY, Albay, Philippines — With dogs barking and yipping in the background, 70 children listened to stories of sibling love, self-acceptance and animal welfare during the Inquirer Read-along in this city.

The children, age 7 to 9, at Maoyod village were treated with Rene Villanueva’s “Tiktaktok at Pikpakbum,” a story about two dog brothers in conflict due to their differing attitudes and preferences.

Jeremy Cruz, principal of Pag-asa National High School, read the story as his students from the Special Science, Technology and Engineering Curriculum acted out the scenes. He wore a “salakot” (native straw hat) and a red robe.

“We have taken this opportunity to advocate our special education campaign, particularly on inclusion,” Cruz told the Inquirer.

The Oct. 1 read-along coincided with the observance of World Animal Day and the start of Animal Welfare Month. As a side event, a free rabies vaccination for animals was held at the Maoyod covered court, in partnership with the Legazpi City Veterinary Office and the Philippine Veterinary Medical Association chapter in Bicol.

Veterinarian Myrina Hannah Aspe of Albay Pet Care and Grooming Center Co. read “Si Putot,” a story written by Mike Bigornia about a dog who was not happy with his short tail until a worm pointed out that it actually meant luck for him.

The story teaches readers the values of self-acceptance and gratitude for life’s happenstance.

Michael Lucena, a 15-year-old student with autism, was among the actors, and portrayed the friendly and healthy Tiktaktok.

Lucena is in the top of his mainstream regular class in Pag-asa, like most of the special education students.

“They are performing at par with, and even outstanding, other regular students,” Cruz said. “Some of them are academic honorees.”

The principal said the interactive narrative was meant to show the children that people were different and that they should understand and accept those differences.

“Through the story, we were able to tell the children that after struggles and challenges, there is always an opportunity to change,” said the three-time Inquirer Read-along reader.

In Pag-asa, students with severe or profound disabilities are enrolled in transition programs, which also offer vocational skills training.

“Most of those that were able to finish the transition program are now national certificate holders,” he said.

The school started the program in 2015, which was recognized by the Department of Education as a model school in inclusive education in the country.

Two of its first senior high school graduates are now permanent employees of a food chain in Legazpi City.

“We wanted to provide the bridge that links between training in school and work opportunities,” Cruz said. “For many years, they were confined in one area, so their skills and potentials were not maximized and many go home without being productive.”

While Aspe and Cruz were telling stories, city veterinarians and other office personnel gave free vaccination to both pets and strays in Maoyod.

In observance of Animal Welfare Month, Estipona said his office would continue informing residents about their responsibility as pet owners.

“[Pets] are just a collateral damage of the neglect of the pet owners,” he said.