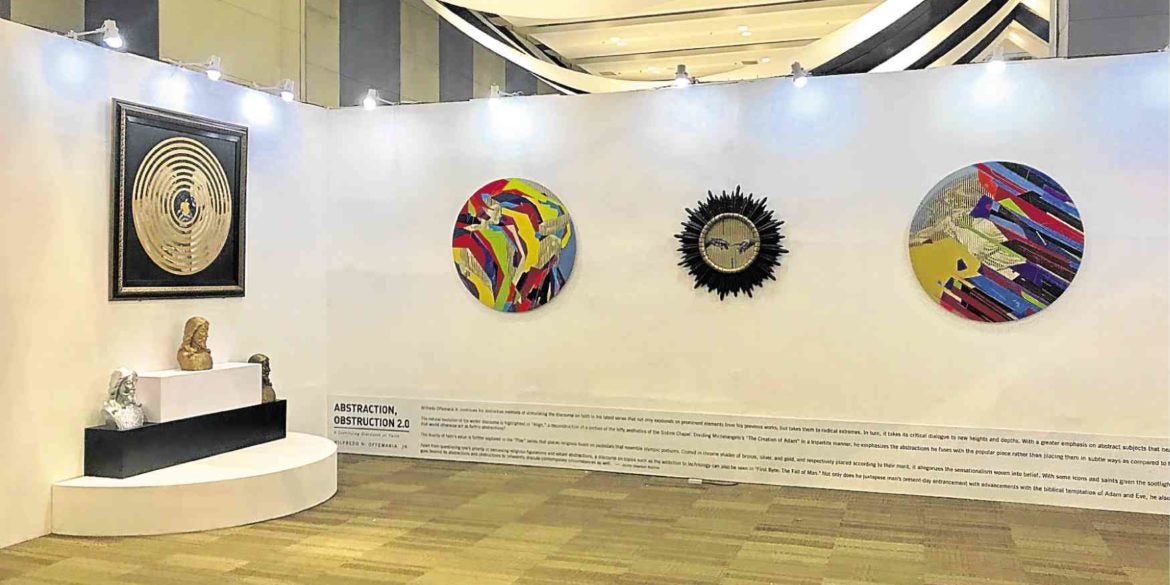 Wilfredo Offemaria Jr. continues his critical discourse on faith via the visual arts in “Abstraction, Obstruction 2.0,” shown during the 11th edition of ManilART festival over the weekend.

The new series tried to build on the inaugural series mounted during the 10th anniversary of ManilART last year. Like before, the works question whether faith is abstraction or obstruction?

“Align” deconstructs the Genesis story on the Sistine Chapel, dividing Michelangelo’s “Creation of Adam” in three parts and layering the divisions with multicolored polygons to allow only glimpses of the actual work. Offemaria seems to ask viewers if they recognize the base imagery from faith alone or by popular knowledge.

In “Play,” religious busts sit on pedestals that resemble Olympic podiums. Coated in shades of bronze, silver and gold, the series allegorizes the sensationalism woven into belief. With some icons and saints given the spotlight more than others, including the Holy Trinity, the installation appears to question commonplace notions of religious devotion as a competition among saints or intercessors, misleading religionists as a result and drawing them away from worship of the true God.

Science and technology (S&T) as occasion of sin is depicted in “First Byte: The Fall of Man.” In retelling the fall of Adam and Eve, Offemaria transforms the biblical apple from the Tree of Knowledge of Good and Evil into the ubiquitous Apple computer logo. The message is clear: S&T is the forbidden fruit. —CONTRIBUTED