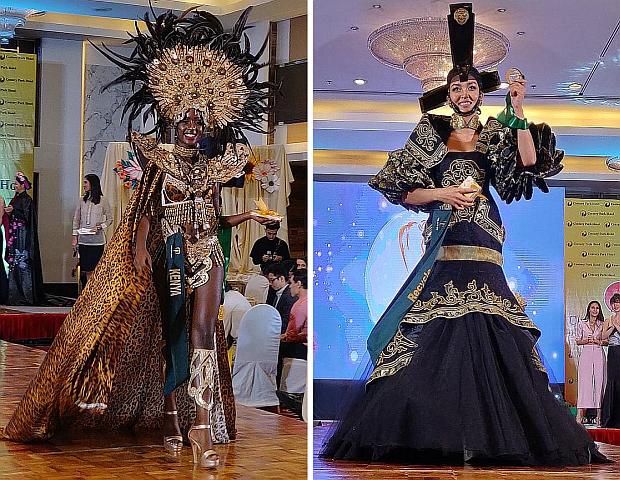 MANILA, Philippines — After a colorful parade of 85 national costumes, the 2019 Miss Earth pageant awarded medals to those who topped the competition in four geographical divisions.

Earning gold in Africa was Susan Kirui from Kenya, who wore an animal-printed ensemble inspired by the fictional African country of Wakanda, the home of Marvel comic book superhero“Black Panther.

The bronze medal for Africa went to Nigeria’s Susan Garland who wore a costume from the Edo state.

Two white costumes incorporating large back pieces topped the contest for the ladies from the Americas.

Chile’s Fernanda Mendez showcased a “Queen of Eternal Ice” costume representing the eternal ice of her country, which is the largest concentration of glaciers in South America.

Panama’s Marianna Fuentes’ pearl- and crystal-encrusted costume earned the silver medal, while the bronze medal went to Peru’s Alexandra Caceres Drago who paraded as a mythical defender of the Amazon.

Janelle Tee of the Philippines took home a silver medal with a Patrick Isorena “Ati-Atihan” festival costume. The bronze medal went to Vietnam’s Hoang Hanh, whose costume drew inspiration from the Vietnamese national flower, the lotus.

The gold medal for Europe went to Spain’s Sonia Hernandez, whose costume depicted “the beauty of the carnation,” her country’s national flower.

Europe’s silver medal was awarded to Klara Vavruskova of the Czech Republic for her “Queen of Czech Meadows” costume, while the bronze went to Crimea’s Anastasia Lebediuk for her Crimean royalty ensemble.

The Manila-based Miss Earth pageant was launched in 2001 as a platform to promote environmental awareness. Its delegates, dubbed “Beauties for a Cause,” serve as ambassadors for environmental protection.

During the national costume competition staged at the main ballroom of the Century Park Hotel in Manila on Oct. 14, Chilean Ambassador to the Philippines Jose Miguel Capdevilla Villaroel discussed the Santiago Climate Change Summit, which will be held at his nation’s capital in December.

Miss Earth Foundation Director Princess Manzon also led a “chocolate toast,” together with 2017 Miss Earth Karen Ibasco and some of the 2019 Miss Earth delegates, to promote awareness on the urgency to help save the cocoa trees in the world, and all trees in general.

The 2019 Miss Earth pageant will stage its coronation ceremonies at the Cove Manila club at Okada Manila in Parañaque City on Oct. 26, where Nguyen Phuong Khanh of Vietnam will crown her successor.