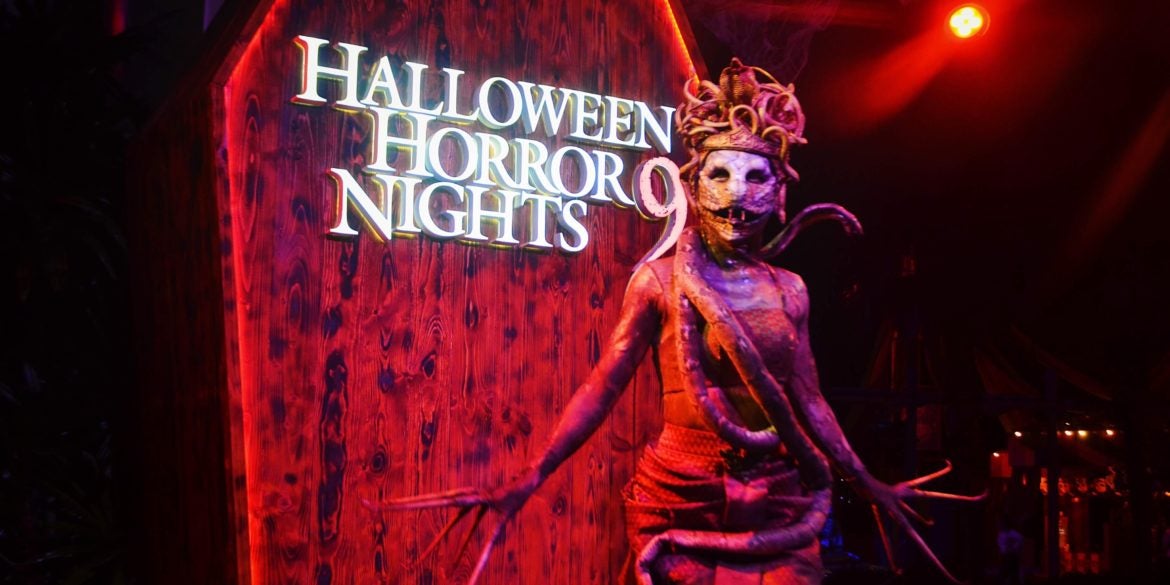 Freaking out over killer clowns, metalheads, and a man-eating snake spirit

Last year’s “Halloween Horror Nights” turned me into a fan of All Hallows’. So, I was ecstatic upon finding out that I would again have the chance to experience it.

Here are the standouts:

‘Curse of the Naga’

Upon exiting last year’s cynosure, the “Stranger Things” haunted house, I thought, “How will they top this one?”

Well, USS upped its game this year with Thai horror film directors Parkpoom Wongpoom and Gunn Purijitpanya collaborating on HHN 9’s centerpiece, “Curse of the Naga.” The duo, famous for “Shutter” and “4bia,” are the first filmmakers USS tapped to design a haunted house—much to the delight (or terror) of horror fans.

“Curse of the Naga” is a masterclass on immersive set design and stunning visuals. The experience begins with a creepy-looking man holding clear bottles containing snake blood and asking me to take a sip of the concoction.

While I drink the blood only figuratively, it seems I immediately feel its effects after entering a hypnotic room that turns my world upside down.

What follows are nonstop spooks, as the snake spirit, Naga, follows my journey across a lost village in Bangkok.

The chilling mini-excursion concludes with the Naga eating and digesting me—it feels like I’m in its intestine, as rubbery walls with a “funky” smell constrict me and eventually excrete me out of the house.

A personal favorite this year, the Twisted Clown University, has one of the scariest characters I’ve encountered: killer clowns.

Among the five haunted houses, I like this one because it’s the most colorful—in terms of visuals as well as the kind of words you will utter.

While HHN 8 last year also had two scare zones, this one brings a killer live show within one of the scare zones.

Death Fest Live is a frenetically paced heavy metal concert situated at the Death Fest scare zone (the New York-theme area in the amusement park during the daytime).

Its ecstatic nature might transform you into one of the metalheads and savages who serve as planted audience members in the show.

True to form, USS still packs a punch. However, what really caught my attention were the actors.

USS hired plenty of actors this year (around 500 people were involved in making HHN 9 possible) and everyone remained in character—even as guests flooded each house for four hours straight.

The actors’ commitment to their roles played a major part that made HHN 9 memorable. —CONTRIBUTED