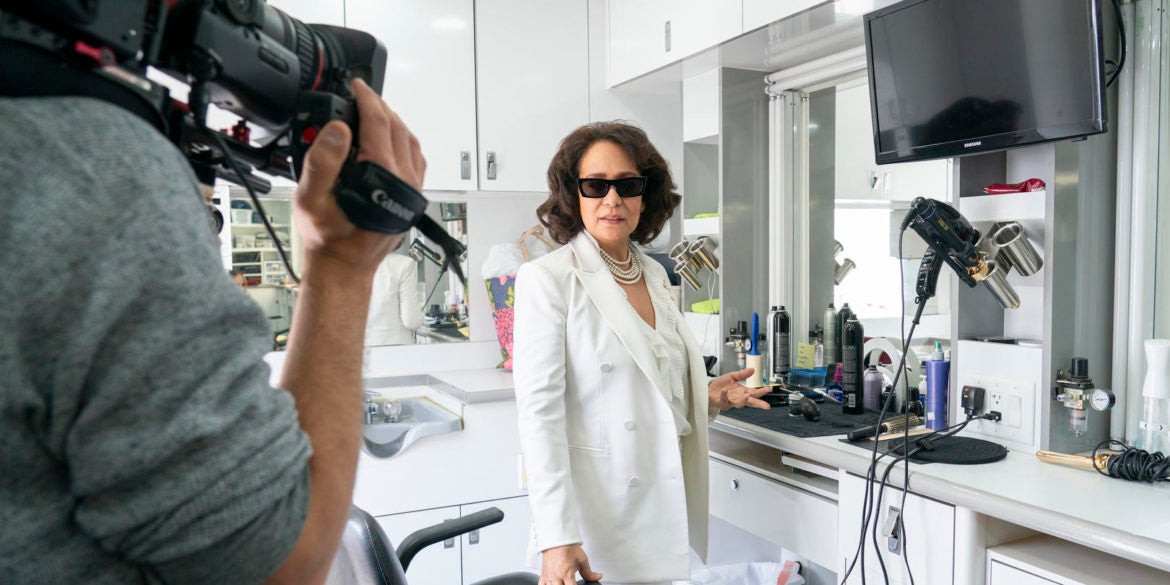 Gloria Diaz on the set of “Insatiable.”

“I thought it was a joke,” said Gloria Diaz about the message she received on Viber, asking if she’d be interested in being a guest star in the second season of the Netflix show “Insatiable.” When she realized they were serious, she said, “I was thrilled. Super thrilled.”

Casting the 1969 Miss Universe made perfect sense—after all, “Insatiable” takes audiences into the mad world of beauty pageants as it tells the story of Bob Armstrong, a lawyer slash pageant coach played by Dallas Roberts (“The Walking Dead”), and his new protege, the formerly fat high school student turned beauty queen Patty Bladell played by Debby Ryan (“Jessie”). In the show, Gloria plays Gloria Reyes, who is described by Bob as “a former Miss Philippines and Miss Universe and the fiercest pageant coach on the planet.”

Dallas said, “In the script, for Bob, Gloria is this sort of lioness of the beauty pageant world, and he’s intimidated and he can’t believe that he’s lucky enough to be around her. You read it and you’re like, ‘Okay, cool.’ And then Gloria shows up and it’s really like you don’t have to act. She’s royal and intimidating and beautiful. You’re just like, ‘Whoaaaa.’ She’s great.”

“She’s a force,” Debby said. “For us to walk into that scene and to meet her and to have her be such a force and have her be so formidable… it’s a type of strength that commands you to move. She came in and did such a beautiful job bringing Gloria to Gloria.”

Dallas, Debby and Gloria were reunited in Manila earlier this month when Dallas and Debby flew in to promote the show’s second season which started streaming last Oct. 11. Gloria said, “I’m amazed that they’re here. The first thing I told them is now you know what I went through to go to you. Fly there for 17 hours and another two hours. They did the same thing.”

While the first season received some backlash in the US for supposed fat-shaming before people could even watch the show, Netflix fans in the pageant-loving Philippines embraced “Insatiable’s” satire. “You know, if the show really touches on anything, it’s about the fact that if someone looks at you and judges you on first glimpse, they actually haven’t gotten in deep to see the real beauty of it,” said Debby, who describes the show as “good people making bad decisions.”

And fans can expect more madness in season two. “More chaos. More fun,” said Dallas. “There’s just nothing more fun than to play in a place where anything can happen.”

“Insatiable” is known for surprising viewers and taking unexpected turns and the same was true for Gloria’s character who ends up revealing some pretty crazy things (we won’t spoil it for you). We asked—how did they get her to say those things? She laughed. “I figured, hey, I’ve said more outrageous things than that in movies.”

“In real life, too, without being in character,” added Gloria’s daughter Isabelle Daza.

Belle said her mom’s “Insatiable” casting turned her into a total stage daughter. “I just wanted her to own it. My mom is good at that, you know, she’s good at getting into character and doing things that aren’t expected of her. ”

Gloria enjoyed shooting in Atlanta. “I was an intruder but they were very kind, very welcoming… lahat sila mabait,” she said. “I was shocked when I walked into the ballroom and my name was all over. I was kilig, super kilig.”

Belle went with her mom the first time she flew to Atlanta to shoot her scenes and helped her throughout the process, even practicing the lines with her in her hotel room. Gloria said, “Belle explained to me what the role was. My daughter has the patience, she’s a teacher. She had to constantly remind me about my lines because I was kind of nervous. So she was behind the camera mouthing pa my dialogue.”

Belle said, “My mom’s not scared of anything. She doesn’t care, you know what I mean? But I think she was very intimidated to be on the set with so many people. It’s Netflix. It’s international level. She wanted to do her best and that made her nervous. And it was good, because I think she hasn’t had that feeling in a very long time. I was like, ‘Mom, just say the line. You can do it.’”

Gloria has one of our favorite lines from the second season: “Happiness is for princesses, queens take control.”

Debby said, “This ends up becoming really huge to Patty. Once she hears that, she really moves in that direction and that kind of begins to be her Northern Star.”

At the time of our interview, Gloria hadn’t seen her episodes yet. “I’m not sure I’m going to watch. I’m going to ask my daughters first what they think before I watch.”

At the “Insatiable” fan event, Netflix brought together the stars and the viewers for an incredibly fun and inclusive evening that included a Wiener Taco truck, an instant pageant that Debby, Dallas and Gloria judged, and performances of Insatiable songs (including the Miss Magic Jesus pageant song) by the drag queens of O Bar.

“I walked into the fan event and it felt like we were on the set of the show,” said Dallas.

Debby said, “I have been doing press for over 13 years and I’ve never experienced anything like last night. I think when you create a world that you care so much about, to be able to see it resonate so strongly with people, to be able to really interact with them and watch their interpretation and see how it transcends cultures and what it means to everyone is so special. I will never forget it.”

Debby and Dallas enjoyed their time in the Philippines, with Dallas also spending a week in Palawan when the Netflix events were over. “It’s been lovely. The food’s wonderful. Everyone’s been so friendly,” said Debby.

During our interview, Dallas said to Debby, “Let’s come back a year from now.”