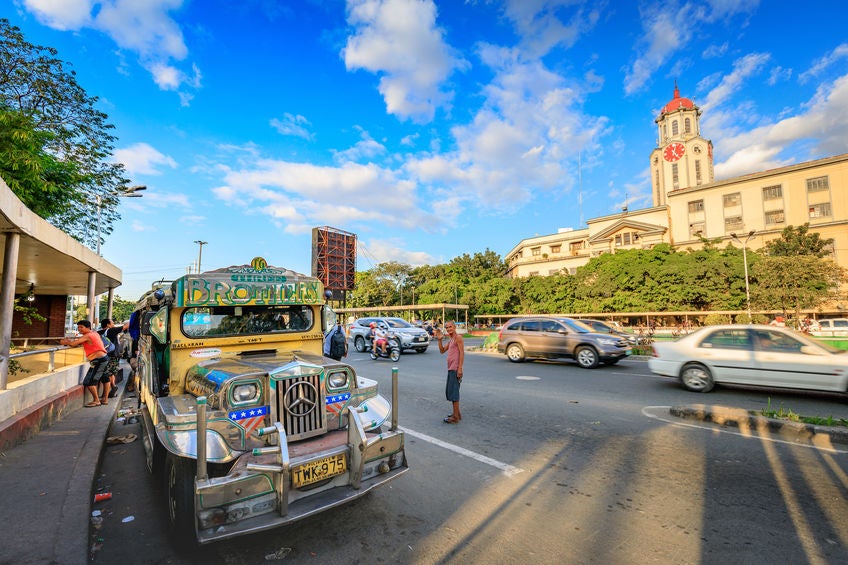 Manila, Philippines - Feb 4, 2018 : Jeepneys waiting for passengers on the street in front of Manila City Hall

Like the Kung Fu Panda, I have both eyes on you, young man.

You’re easy on the eyes and making a lot of sense and springing to quick action. Now a favorite of media, you are very visible. It shouldn’t be hard to follow you.

And you haven’t been an actual disappointment—not yet. You seem tireless, always out there at work morning, noon and night, even as your city and your family sleep.

You inherited a mess, a city in decay, physical and moral. Untainted by corruption, you arrived like a breath of fresh air. We who love your city for more than just sentimental reasons wish you success, but we also want to help keep you clean and focused—by watching you.

Mine are friendly eyes, I assure you. After all, you were quick to adopt us as your titas, especially us the original members of the Winner Foundation, who are old enough, really, to be your abuelitas.

We were, in partnership with then Mayor Alfredo Lim and first lady Amelita Ramos, the builders and caretakers of Arroceros Forest Park. You were a mere 16-year-old, if you would be 45 on Oct. 24, when it began to rise from rubble in 1991.

As grandmothers, we have our lives halfway done. But my Roces cousins and I, instead of being content taking care of our little gardens, have decided once again to become involved with your dying city, not just the forest park—although it is that for which we fought hardest and longest.

We trust, as you have promised, that none of its trees will be cut again, not for any reason, because no reason is acceptable in these times that will further disturb ecological balance, that will deprive migratory and resident birds sanctuary and humans some healthy air to breathe, that will take away from its mighty neighbor river a partner in providing the city some natural relief from its oppressive existence.

Our family has deep and passionate ties to your city. The father of the longtime president of our foundation, Regina Roces Paterno, was vice mayor to the legendary Arsenio Lacson, when Manila was a lively and beautiful historical city—worthy still to be called the Pearl of the Orient.

My own dad was himself a five-term congressman, his last term as representative of its business district (the third district now, the second then) abruptly ended when Congress was abolished with the declaration of martial law by Ferdinand Marcos, a professed idol of yours (a disappointment we are willing to overlook for now and ascribe to your naivete).

Dad and his four brothers were born in Oroquieta, in one of those identical chalets set in a row that must have had a yard big enough to accommodate Lolo’s pasalubong to his sons from Sumatra—a young elephant; Goyo, as it was named, was eventually donated to the zoo in the Jardin Botanico.

The family moved to a bigger home on Taft Avenue and Remedios Street in Pasay City, where my young parents also first lived and I was born.

Still most of the family lived and worked there. I myself went to St. Theresa’s in San Marcelino for a college degree.

Until my parents built a bungalow on Macopa Street in Quezon City, I continued to live with my grandparents but spent fabulous weekends with my parents in a rented apartment owned by an aunt, Alice Villareal Roces. It was in a small esquinita called M. Natividad, near second-run Scala theater, where I watched double features.

Further down, toward Sta. Cruz, was the Opera House, which showed the funniest and best musical live shows. And around the block was a small panciteria.

And there was more. Sunday breakfasts were at Taza de Oro or Country Bake Shop. On warm Saturday nights we slept in our car, parked at Luneta, its doors and windows open to let the cool sea breeze in from the bay. Our German shepherd Frieda stood guard. At the time we only needed to keep bothersome vendors away. Manila was clean and safe.

Our own family owned a cinema on Rizal Avenue—Cine Ideal. It was among my Lolo Rafael’s first entrepreneurial ventures, inaugurated in 1910. It was first-run (unlike Scala, running only one movie) and showed exclusively MGM movies. Free movies were, for me, the greatest privilege, enjoyed as much by my children growing up.

The other Roces asset was The Manila Times, on Florentino Torres. Dad wrote a column there. It put bread on our table, he liked to say; thus, its title, “My Daily Bread.”

In truth, bread came from his lawyering and professorship in corporate law at Far Eastern University (FEU), where at one time he was adviser on its school paper, The Advocate.

FEU was another family asset, on my lola’s Reyes side. Like Congress, The Manila Times was also closed by martial law. But FEU, founded in 1928 as an accounting school, has grown beyond its founders’ dreams.

I am addressing you, Isko, as a Manileña. The historian Peter Frankopan tells in his book, “The Silk Roads,” that Manila was the first cosmopolitan city, in the sense that all kinds of goods from just about everywhere in the world were available there.

One surviving shipload of goods from Manila—the rest could all have sunk in a shipwreck—was said to have been enough to make a returning Spaniard rich for the rest of his life. China seems to remember that greedily enough to seize the West Philippine Sea for itself.

That, Isko, is the city now in your care and protection. It has not changed its strategic, coveted location.