2019 Miss Earth beauties design bags for a cause | Inquirer Lifestyle 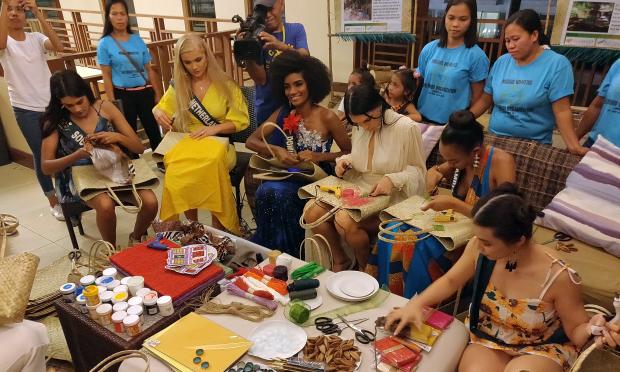 Using nontoxic paint, bottle caps, pili fruits, and other items, the Miss Earth delegates put their stamp on woven buri bags which will be sold in a special charity auction. (Photo by Armin P. Adina / Contributor)

2019 Miss Earth beauties design bags for a cause

BACACAY, Albay, Philippines — Some of the delegates of the 2019 Miss Earth pageant got their creative juices flowing when they tried their hand at bag design, to benefit the women of a barangay in Bicol.

Using woven buri bags made by the women under the Misibis Women’s Livelihood Organization (WMLO), a select number of pageant delegates from around the world used paint, pili fruits, discarded bottle caps, excess fabrics, lace and ropes to express their creativity.

A special hall inside the compound of Misibis Bay Resort in Bacacay, Albay, served as their workshop venue during the visit of the 2019 Miss Earth delegates on Oct. 20. There, members of the MWLO offered their assistance to the pageant participants.

The bags will be auctioned off to help raise funds for the numerous projects of the MWLO. The women members of the organization produce different products by weaving buri as their livelihood.

Aside from helping with MWLO’s livelihood project, the Miss Earth beauties also treated spectators to a special resort wear showcase, with the Albay Gulf serving as backdrop.

Wowing the panel of judges in the special presentation was Nikki Prein of the Netherlands, who took home the “Miss Earth Flora of Misibis Bay” title. Also considered in choosing the winner were the social media posts produced by the 85 delegates.

This year’s edition of the Philippine-based international pageant adopted “flowers of the world” as its theme, to celebrate the bountiful flora of the planet.

The special resort wear competition for the “Water Group” of Miss Earth was also held at Misibis Bay Resort. As in the previous years, the delegates are divided in three groups — Air, Water, and Fire.

But the ladies did not travel to Bicol only to parade in front of a select group of spectators. The delegates, dubbed “beauties for a cause,” are set to take part in a tree-planting activity by the bay, and a teaching event at the Misibis Elementary School.

They will also visit Naga City in the province of Camarines Sur for a series of environmental activities with the city government.

Nagueños will also get a special treat from the delegates in a special presentation to be staged at the Jesse M. Robredo Coliseum on Tuesday evening, where the “Flora of Naga City” will also be proclaimed.

The 2019 Miss Earth pageant will hold its coronation ceremonies on Oct. 26 at the Cove Manila club at Okada Manila in Parañaque City.

TV host Janelle Tee is representing the Philippines in the 19th edition of the Miss Earth pageant.