What use are pretty classrooms when the children are hungry? | Inquirer Lifestyle ❮ ❯ 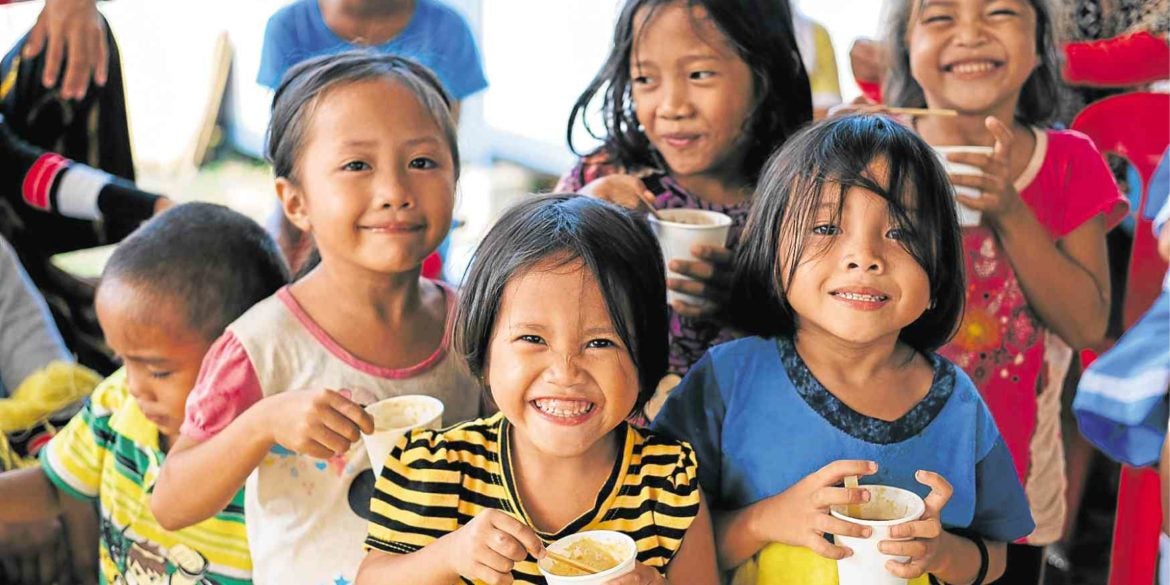 What use are pretty classrooms when the children are hungry?

A 9-year-old child in a kindergarten class was the catalyst for the creation of the Bacolod-based Negrense Volunteers for Change (NVC) Foundation Inc. The group’s indefatigable president Millie Kilayko spotted the boy, who towered over his classmates when she and the group she used to volunteer for turned over the newly constructed classroom.

She found out that the boy was one of seven siblings whose parents could only send one child a year to public school. “These children would grow up illiterate if they took turns going to school,” Kilayko said.

She asked around and learned from teachers that even the luckier ones, those who could go to school daily, were often too hungry to pay attention in class. “Some of these children subsisted on one piece of cassava a day.”

That’s when she asked herself, “What good are pretty classrooms if we don’t feed the children so that they can go to school and learn?”

With her infectious zeal, Kilayko was able to put together NVC in record time in 2010. The group’s initial plan was to come up with healthy noodles fortified with vegetable extracts.

“We approached the DOST (Department of Science and Technology) whose regional director asked us if we were really serious about nutrition. There are so many feeding programs for school-aged children given by the Church, the government and the private sector, but the most important stage of a child’s development is before they turn 3 years old,” Kilayko said.

That’s how NVC’s Mingo feeding program started. The ready-to-eat, preservative-free powder can be mixed with a little water to form a porridge-like paste, or it can be added to champorado or vegetable soup. Local farmers provide the rice, monggo and moringa (malunggay) used. It comes in three variants: natural (best for babies), squash and chocolate. Each serving contains vitamins and minerals for brain and physical development.

Infants and toddlers from 39 provinces throughout the country have been enrolled in the six-month nutrition program where they are measured regularly to check if they have gained weight.

“Once they are enrolled, they are weighed at baseline and then monthly for six months,” said NVC executive director and program manager Milette Regalado.

“We’ve partnered with Bacolod restaurants and cafes like Bob’s, Mushu and Felicia’s where a portion of their sales goes to buying Mingo meals that will then be distributed,” said NVC’s marketing and communications manager Ria Lacson-Aviñante.

NVC has a third element that completes its mission of fighting hunger and poverty by providing proper nutrition and providing access to quality education for children of the poor.

Through donations, they have also been able to provide sewing machines, carpentry tools and fiberglass boats to some of the parents of the children enrolled in the Mingo feeding program. To date, they have turned over 4,974 boats and 639 livelihood tools.

Kilayko is the moving force behind NVC. It is her drive and passion that have sustained the foundation for close to 10 years. “Whenever a need arises, there always seems to be someone, some generous donor who steps up and fills that need whether it’s monetary in nature or not,” she said.

From Oct. 22 to 24, NVC will hold “Bai Bai, Bukid” (“sea” and “mountain” in the Hiligaynon dialect), an art exhibit and trunk show in Makati to raise funds for its Mingo feeding program. They will exhibit mosaic art pieces made by combining dyed eggshells, glass chips, ceramic tile and discarded Nespresso capsules. The items on sale will include wall art, statuettes and religious items.

NVC will recognize some of its major Manila-based 2019 partners Oct. 22, namely Sun Life Foundation, the Food Nutrition and Research Institute of the DOST, Spouses of Heads of Mission, Rise Against Hunger Philippines and Vena Energy.