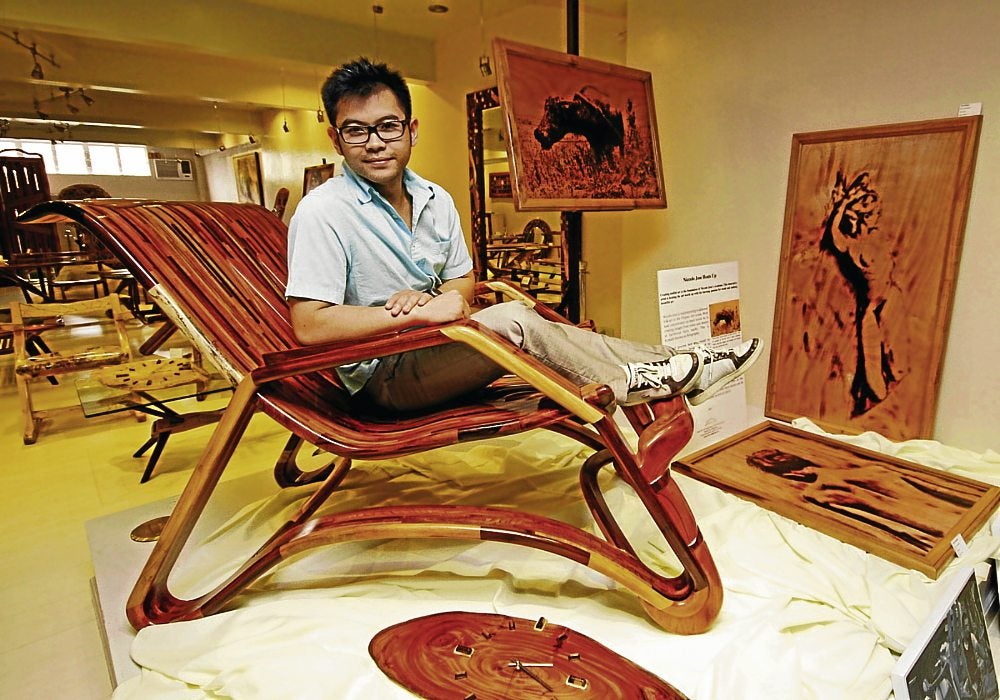 Even before US-educated Filipino sculptor Niccolo Jose used his training in the visual arts to create functional art pieces such as furniture, “pyrographic” portraitures and even costume jewelry, the young artist has been into carpentry. He’s been doing carpentry work, in fact, since he was 10.

Fresh from an exhibit of his Spring Collection at One Rockwell, Jose is gearing up for two more exhibits in March, at Power Plant Mall. He will showcase interior spaces using rare Philippine hardwood sourced mostly from his contractor-dad’s collection.

“I did furniture pieces before, but it was more of a hobby,” said the 20something Jose.

After graduating from Louise and Clark College in Portland, Oregon, with a degree in Environmental Studies and Studio Art Sculpture, Jose came home eager to craft surreal sculptures—larger-than-life images of the human anatomy from twigs, vines and found wood.

“For my senior project in school, I researched on how these natural materials can be crafted and made to look like parts of the human body,” he said.

But Jose set aside his avant-garde pursuits after his mother, also an engineer like his dad, convinced him to channel his creativity into something more “saleable” like furniture.

It also helped that his dad has an extensive collection of rare hardwood taken from old, demolished houses.

No new trees had been cut to produce his current pieces, he assured. He has also begun planting trees in the hope of having enough raw materials for projects two decades from now.

“Because of my background, in school and while growing up, I know how wood reacts,” said Jose. “I know how to bend and manipulate it. Just by looking at it, I know how old the wood is. I can tell by its skin how big the tree was.”

But hardwood can be quite difficult to work with. This explains why there are only a few furniture makers who can claim to be experts in crafting pieces from hardwood.

His dad has also invested in machines, including several diamond cutters to help Jose realize his designs.

“Like this table, for instance, is made of monkono, one of my favorite hardwoods,” he said. “It grows only in the Philippines and Indonesia, but it’s now an endangered variety. You have to cut it before it exceeds 20 inches in diameter. Otherwise, you will need special tools to do the job.”

No two pieces will ever be alike even if Jose produces multiple pieces based on one style. Since he makes do with what is available, a number of pieces look like quilts fashioned from various types of hardwood, from narra to yakal, kamagong to akle.

“I have access to 32 different kinds of materials,” he said, pointing to framed swatches of various hardwoods. “My dad has been collecting wood even before I was born.”

Some pieces, like a chair made of tamarind wood, also have back-stories. Some might find its P51,000 price tag too steep. Jose explained the pricing.

“It’s special because the tree where the wood was sourced was planted by my grandpa 80 years ago,” he said. “Then my dad fermented the wood by burying it for five years. These lines resulted from fermentation.”

Prices depend on how rare the material is, and how big and complicated the work involved.

“Yes, even the cracks themselves are different,” he said. “I intentionally work with cracks. I don’t hide them since they become opportunities to design more.”

Apart from being one-ofs, Jose’s furniture pieces have a natural sheen that’s neither glossy nor garish. It’s the result, he said, of using 20 coats of sanding sealers.

“I don’t use any varnish or oil on the wood,” he said. “I’m open to client’s suggestions and design inputs. In fact, for made-to-order pieces, I even consider such inputs as size and lifestyle. The only time I get insulted is when they ask me if I could paint over the wood.”

Jose describes his pieces as a blend of Filipino, Danish and Japanese styles. All of his pieces are kiln-dried, a good number comes without nails in keeping with Japanese tradition.

“I design, say, a chair starting with its view underneath. I also imagine myself like a fly flying around the furniture piece. Before I even begin to make it, I’m already imagining its smooth lines,” he said.

His younger brother playfully describes Jose as a “pyromaniac.” Using the same blowtorch he uses to bend wood, the artist draws human figures, including outlines of portraits, on hardwood. He dubbed the painstaking process as “pyrography.”

“I can even do an entire wall panel made out of wood based on a portrait or image the client has in mind,” he said. “I’m not the only one doing this, but others use anything from a lighter to a soldering gun. I work with a blowtorch.”

Like his furniture, the artist considers his pyrographic works as heirloom pieces. Like paintings, they become more precious with time. But unlike them, they don’t rot or degrade.

“Burning the outer layer of wood actually preserves it,” he said. “It’s like putting on an invisible coat of sealant on the portrait.”