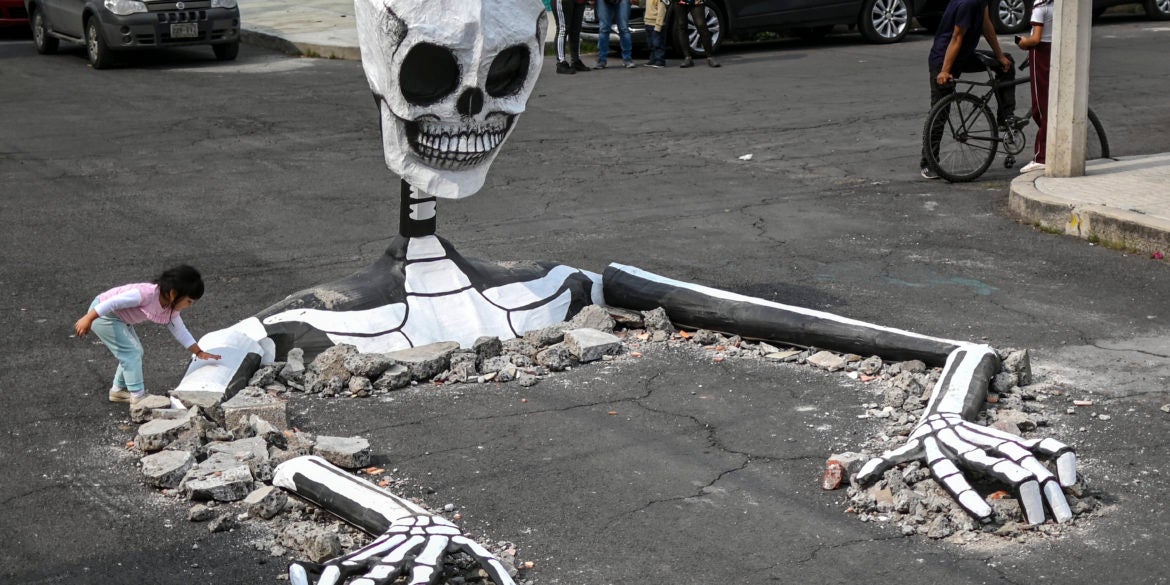 A girl touches a huge cardboard skull made by artisans in a street in the Tlahuac neighborhood, in Mexico City on October 28, 2019, ahead of the Day of the Dead celebrations. (Photo by Pedro PARDO / AFP)

Giant skeletons come alive in Mexico for Day of the Dead

Giant skeletons springing forth from asphalt roads are taking over streets in the Mexican capital as the city gets ready to celebrate the festive and deeply spiritual Day of the Dead.

The sculptures — built out of cardboard and rocks salvaged from a construction site in Mexico City’s southern Tlahuac neighborhood — were built by a group of artists ahead of the festival’s climax later this week.

Day of the Dead celebrations began on Saturday with a parade of women dressed as “Catrina”, a famous skeletal representation of death created by cartoonist Jose Guadalupe Posada in 1912.

The Day of the Dead festival, celebrated in Mexico on the first two days of November, is believed to be when the gateway separating the living and the deceased opens, allowing people to pay their respects to those who have died.

Mexicans visit cemeteries to pay respects to their late relatives, bringing them food and drinks in a centuries-old tradition mixing pre-Hispanic and Catholic beliefs.

The festival was added to UNESCO’s cultural heritage register in 2008.