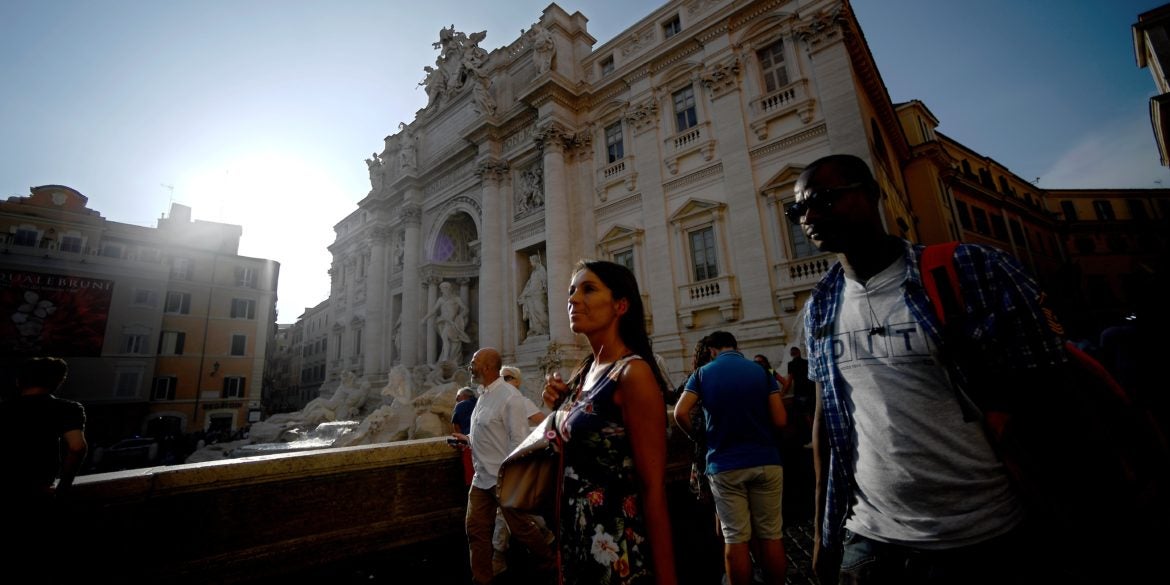 Kaba from Guinea visits with Italian tourists Rome's Trevi Fountain on September 4, 2019. - The Eternal City's famed monuments are given an African twist by refugee and asylum seekers Abdul, Kabal and Sidia, who use anecdotes from their life journeys to show the Italian capital in a unique light. For most of their time the "Invisible Guides" belong to Rome's multitude of anonymous migrants. But twice a month they hand out audio guides and lead walking tours organised by the Laboratorio 53 association in English and Italian. (Photo by Filippo MONTEFORTE / AFP)

The Eternal City’s famed monuments are given an African twist by refugees Abdul, Kaba and Sidia, who use anecdotes from their life journeys to show the Italian capital in a unique light.

For most of their time the “Invisible Guides” belong to Rome’s multitude of anonymous migrants. But twice a month they hand out audio guides and lead walking tours organised by the Laboratorio 53 association in English and Italian.

First stop is Piazza di Spagna in the historic centre, with its grand staircase, expensive boutiques and snap-happy tourists.

Abdul Gafaru says it reminds him of the Vienna City district of Accra in his native Ghana, where “the rich go to have fun.”

The difference is that here “the rich and poor behave and dress the same”, and while tourists “can leave their country, go on holiday, then go back home”, Gafaru cannot.

Mamadou Cellou Diallo, a Guinean who supervises the walk, told AFP the aim was to “combine our stories with the sites, and show things people don’t usually notice.”

He shows how a climbing plant on one wall hides a 17th-century plaque which threatens fly tippers with heavy fines.

Centuries on, garbage litters the streets of Roman suburbs where many migrants live, and it reminds many of rubbish-strewn streets of large African cities.

The tourists stop at the edge of the busy Via del Tritone, where Lamine Sanogo tells the tale of his journey to Italy from Mali, which saw him cross five borders and the Mediterranean sea — where 25 of those on the boat with him died.

“They tell their stories with great simplicity and dignity, simply to say that they exist”, says Eve, a French woman who has lived in Rome for 28 years and did not want to give her surname.

Kaba Coulibaly from Conakry in Guinea says he hopes the project will help combat “prejudices against black people.”

“Italians think we are thieves, and bandits. We decided we should show off our cultures and make people think.”

The refugees and asylum seekers come from across Africa and their stories only scratch the surface of the violence and trauma they have suffered along their perilous journeys to Europe.

“The idea is to convey our emotions to the tourist through an event we have experienced,” Diallo says.

Standing in front of the Trevi Fountain, the listeners are transported to Casamance in Senegal, where Sidia Camara lost a childhood friend, aged just 10, when he drowned in a river where the village children played.

“Water scares me,” he says now. Despite that, he likes the Trevi Fountain because it reminds him of the “bolon” — which means moving water in his native Mandinka tongue — though “they are different in their sounds”.

For the past three years, migrants assisted by the association have been taking part in a radio laboratory where they write and then record their stories, to which ambient sounds are then added.

Threads of those stories are then linked to tours of the picturesque Trastevere, San Lorenzo and Monti neighbourhoods.

Marco Signorelli of Laboratorio 53 says the tours bring in money for the migrants, but are mainly aimed at “affirming the idea that migrants are citizens like any others, and their perspective can enrich our vision of the public space”.

Rome local Alfredo Gagliardi says it made him look at the historic centre differently.

“When I come to the centre it’s for entertainment. For them, it’s to go to the police station for their residence permits”.

Coulibaly says he is often racially abused in Italy, but being a guide helps serve as a counterbalance.

“This experience allows me to build relationships, meet people who are interested in my story and me personally,” he says.