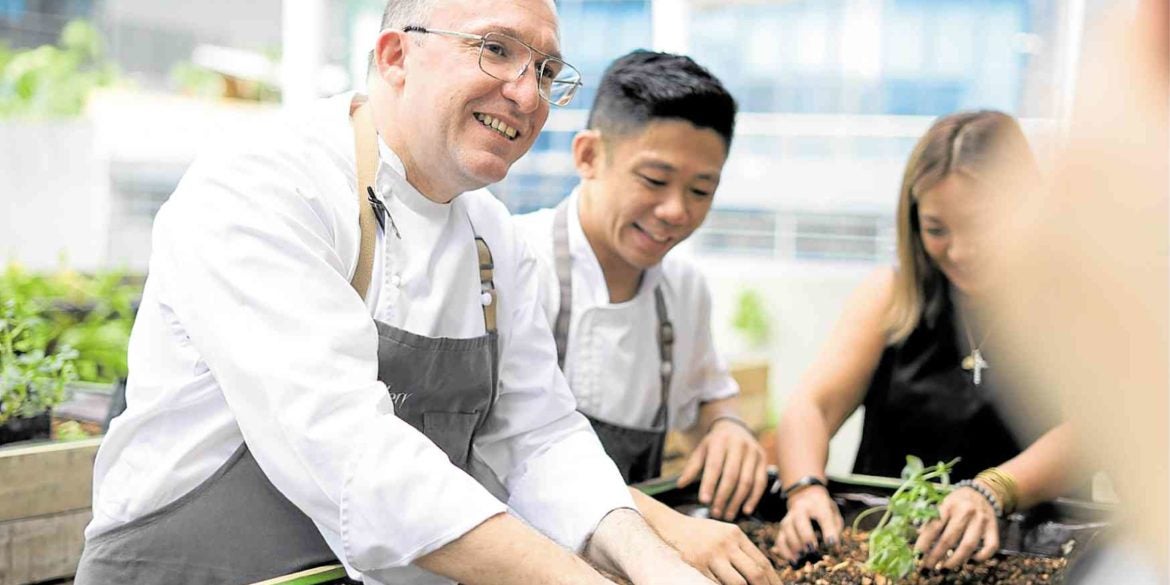 Chele Gonzalez of Gallery by Chele planting at his greenhouse.

On World Food Day, Oct. 16, at Makati Shangri-La, Carlo Sumaoang of MNL Growkits, a company that offers organic plant kits, said that urban young people don’t have any idea about farming. At the very least, they have a negative idea about it, he added. They don’t want to “dirty their hands.”

It has to appeal to their sense of adventure for the youth to have a positive view of farming. Sumaoang said they should experience planting the seed, seeing the plant sprout from it, harvesting and eating it.

He believed there’s hope, especially since the youth are concerned about the environment—they’re going green and trying zero-waste management.

Generations ago, most houses in the Philippines had a backyard where plants seemed to grow on their own, and the kitchen could have fresh vegetables for bulanglang any time. There were fruit trees that the children could climb for play and from which the household could source seasonal fruits.

I was fortunate to have studied for two years in the province where the vegetable garden was part of the instruction.

Because my children went to a progressive school, they were taught how to plant and harvest rice and also how to raise tilapia. The spirit of those lessons was play rather than work. But I will always be grateful that my kids and I experienced it.

Sadly, real estate has become so valuable that rice fields and tilapia ponds have to make way for housing. It’s happening all over the country, don’t you think?

Makati Shangri-La has teamed up with MNL Growkits to start an herb garden at the hotel’s third floor. In three years, the garden is expected to supply the herbs needed by the hotel kitchen.

Presented that day were herbs that would be used for certain sauces—parsley for the Argentine chimichurri, red and yellow bell pepper for the Basque piperade, coriander for the Mexican salsa molcajeteada, roasted red peppers for the Spanish romesco, and avocado with lime and coriander for the guacamole.

Guests were asked to join in making the sauces—pestles pounding the mortars slowly filling up with ingredients sounded like music in the kitchen.

That same week, Gallery by Chele showcased its own greenhouse on the same floor as the restaurant. It’s in an open balcony where plants were either sprouting or already bearing fruit.

Some guests obediently brought seeds so they could be taught how to grow them at home as well.

There were wooden crates where the compost was spread out, while metal bins with openings at the sides were used for vertical farming. A net overhead protected the plants from strong rain and wind.

Chele Gonzalez said he has always been interested in local ingredients which he mixed in his cooking. He said he was growing Talinum (fame flower), whose leaves are used in salads; begonia, an ornamental plant but whose flowers can be eaten and whose sap can curdle milk; and bignay or currant tree, a sour fruit that can be made into wine and vinegar, as well as jam.

Makati Shangri-La and Gallery by Chele are practicing “urban agriculture” or container farming. In their respective locations, they set an example for nearby buildings to use every available space to grow plants for décor and for eating.

They are not actually the first establishments to do so, because condominiums have done it, the owners sharing in the planting and harvesting and benefiting from the culinary and curative benefits of plants, especially herbs.

Deadline for entries to the DGF Food Writing Award is today, Oct. 31. Theme is “Fish.”