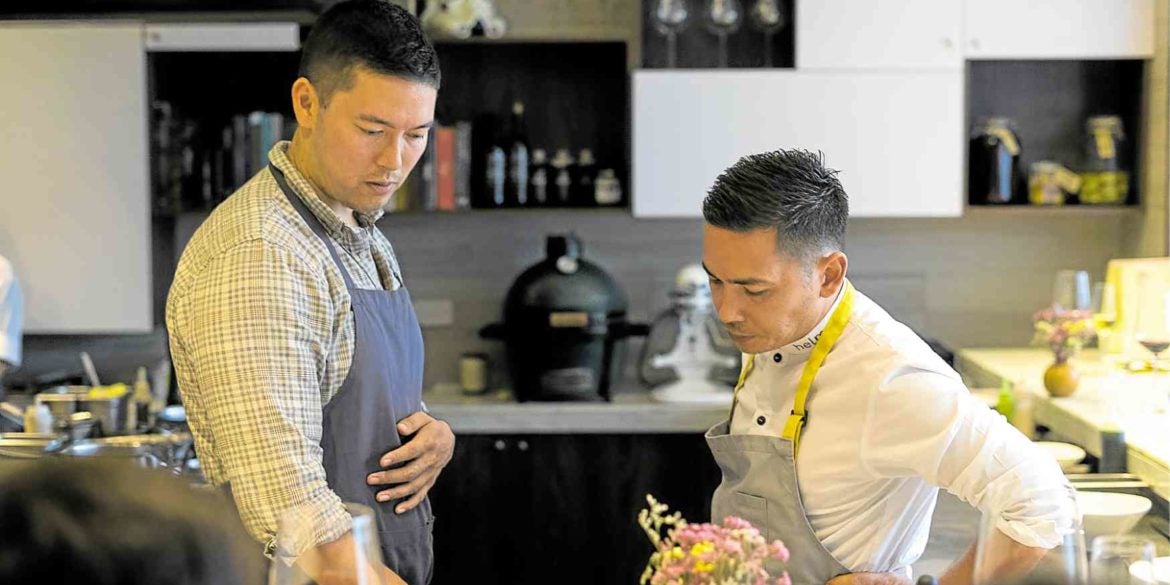 Buck and Boutwood discussing their. dishes

Why chef collabs are a ‘brilliant fad’

Chefs have been spicing up the uneventful local restaurant scene lately via collaborations with fellow chefs for special one-off meals.

But while it gives diners a chance to enjoy an exclusive tasting menu, it’s the chefs who actually benefit more from such joint efforts.

“I met Josh last year at the Asian Culinary Exchange when he did a pop-up with Rishi Naleendra of Cloudstreet,” said Buck.

“His food philosophy really gelled with mine. We both make charcuterie and sourdough bread, and we both tend to utilize European produce. Though he blends Filipino flavors with European ones, I veer toward the Japanese-European combo.”

Buck added: “The idea of producing a nomadic-style dinner showcasing several regions to give a true representation of ourselves really excited me.”

“Working with Josh was a breeze and we really complemented each other, both technically and personally,” said Buck. “He is extremely calm, composed and patient, whereas I can be more impulsive and emotional. And we both learned from each other.

“Josh introduced me to new flavors and local ingredients I have never seen in Singapore, such as the bugnay berry wine and crab fat, and I brought over some of the unique Canadian products I use, such as fermented vegetable juices and birch syrup.”

Early this month, Chele Gonzalez and Carlos Villaflor of Gallery by Chele collaborated with Matthew Sartori of the award-winning Wildflower restaurant in Como The Treasury hotel in Perth, Western Australia.

They also had a healthy exchange of ideas and ingredients as they prepared an eight-course tasting menu highlighting their home country’s seasonal produce.

Their delicious partnership was obvious from the start when guests were served the bread course—dried wattleseed-sprinkled butter and ube sourdough.

The courses that followed were equally impressive. Local tuna belly was spiced with native Australian lemon myrtle and rattan chips; a whole shelled prawn was dressed with brown butter and sandalwood nut oil; a tender piece of black Iberian pork was accompanied by a smear of black garlic, a dab of sweet potato and Australian strawberry gum; jackfruit éclair came with latik ice cream and crisp coconut chips; and bibingka that was as delicate as a Japanese cheesecake.

Their rapport was inspiring. And it was partly due to their trip to see the Ambla Aetas in Subic days before the dinner, where they learned new techniques and bonded with the tribe.

“As a chef, it is extremely positive and necessary to make you and your team grow and to see how other people cook and work,” Gonzalez said. “From the highest profile chefs to the most humble ones—and to the tribes even—we can always learn something from them and vice versa. It’s great to share knowledge and build stronger relationships.”

Their tandem is interesting. Del Rosario is more senior, and their cooking styles differ—he is more into classic techniques, while Chikiamco veers to
the modern side.

Del Rosario is known for Filipino fare, while Chikiamco plays with a variety of cuisines. Yet, given the contrast, they managed to put together a tight and balanced meal.

“We thought it would be a great idea to feature an all-meat menu, featuring wagyu, kurobuta and lamb,” says Chikiamco. “It was interesting because normally, for themes like this, it’s presented as a buffet. But we wanted to show not only the quality of the meats but also how we can present them in a coursed format, from light to heavy. We also wanted it a Filipino theme, except for the char siu, to show how high-quality meats can come out beautifully with our cuisine.”

Both chefs had an input in every dish, making it a true collab.

The meal was capped with brazo de Mercedes con mais, nestled in baby corn husk and corn silk made from sugar.

“For chefs, collaborations provide an opportunity to be creative, challenge themselves and think outside their comfort zones by experimenting with new techniques and flavors that may not be available in their day-to-day setting,” said Buck. “For the dinner at Savage, I had the chance to work with wood-fired grills, which, though not new for me, was still a really nice treat.”

“It is also important to look beyond our own backyard, see what our neighbor’s have, and consider influences that can have a good impact,” said Del Rosario. “People want more than just great food. They want an experience. Call collabs a fad. For me, it is a brilliant idea.”—CONTRIBUTED