‘The Quest for the Adarna’: Good script, remarkable stagecraft, but . . . | Lifestyle.INQ ❮ ❯ 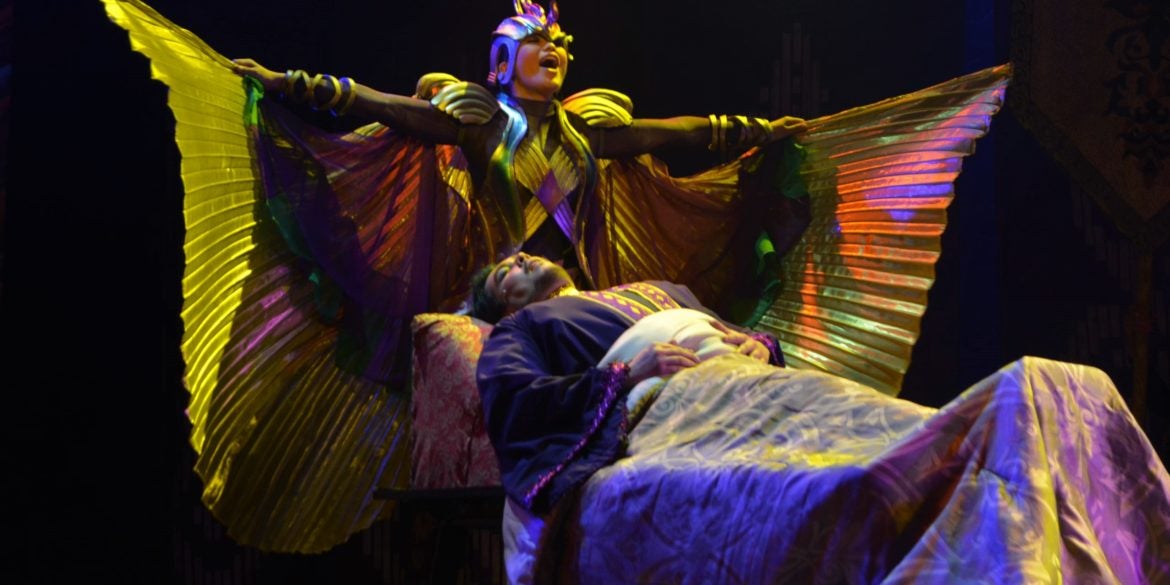 ‘The Quest for the Adarna’: Good script, remarkable stagecraft, but . . .

The most remarkable thing about Repertory Philippines’ “The Quest for the Adarna” is Luna Griño-Inocian’s condensation of the labyrinthine “Ibong Adarna” into a 90-minute, English-language musical that somehow still feels faithful to the original.

Like hacking through a thick forest, Griño-Inocian has found a way to simplify the Filipino epic poem into something easily accessible—and, more importantly, fun. What was once just required text for high school students is now a treasure hunt by way of Disney.

Disney can be a good thing, of course—especially when you’re catering mainly to preschool and grade school kids. The parts that really move the story forward, anyway, are all there: three princes, two envious brothers, a love story, an elusive, magical bird—all woven into a classic formula where heroes find true love and goodness triumphs over evil.

However, a good script is nothing without quality music, and it is in this arena where “Adarna” loses steam.

Rony Fortich’s music manages to be both too complicated and too generic that even after multiple viewings of this show, none of the melodies really stick with you. (The most memorable musical moment, in fact, happens to be a song about the legendary bird’s petrifying excrement—and that’s partly because it was done as a rap number.)

There’s a reason it’s called a “musical.” Think, for instance, of the Disney shows that “Adarna” takes after: The music is always the first thing you remember about them. “Adarna,” on the other hand, has nothing that remotely resembles a melodic hook.

There are remarkable moments of stagecraft, too, achieved by the concerted (as well as individual) efforts of set designer Joey Mendoza, lighting designer John Batalla and costume designer Tata Tuviera—instances of puppetry and shadow play, swift changes of setting, or nifty bits of choreography (by PJ Rebullida) that allow the stage and its inhabitants to really come alive.

But the whole of Asia has been splattered onstage—and by that, we mean an oftentimes visually stunning aesthetic that tends to be more confusing than unifying, the individual elements standing out as disparate components of stagecraft rather than working toward a harmonized look and feel. An attempt to make sense of it all, therefore, is a dizzying exercise in scouring the continent.

The uneven cast of thousands (or so it feels, given how each major role has at least two alternates) has standouts in the perfectly cast Luis Marcelo as the vain and vapid Prince Diego; Justine Narciso as the spunky Maria Blanca (by way of Disney’s “Mulan”); and Hans Eckstein, in a much-welcome scenery-chewing role as the hermit who tackles the aforementioned rap number.

The Adarna, alas, is nothing more than a glorified cameo, with four perfectly skilled actresses made to play rooster for majority of their stage time and conclude the show with a bizarre, out-of-place, gospel-inspired finale.

In the end, however, any assessment of “Adarna” should return to how it delivers that most vital of elements in children’s theater. And “Adarna” delivers joy in spades. Whatever the faults in the material and the execution, it cannot be denied that the production jointly directed by Joy Virata, Jamie Wilson and Naths Everett more than sustains its young audiences’ attention and opens up their imaginations.

A thorough critical reading of the piece is always important; sometimes, however, the final verdict may come in the form of juvenile engagement: the boisterous cheering and fidgeting, and participation during the sing-along segments, that dominated both occasions this author caught this production.

In the larger scheme of things, that may just be the most necessary applause. —CONTRIBUTED

“The Quest for the Adarna” runs until Jan. 26, 2020 at Onstage Theater,  Greenbelt 1, Makati City. ticketworld.com.ph.