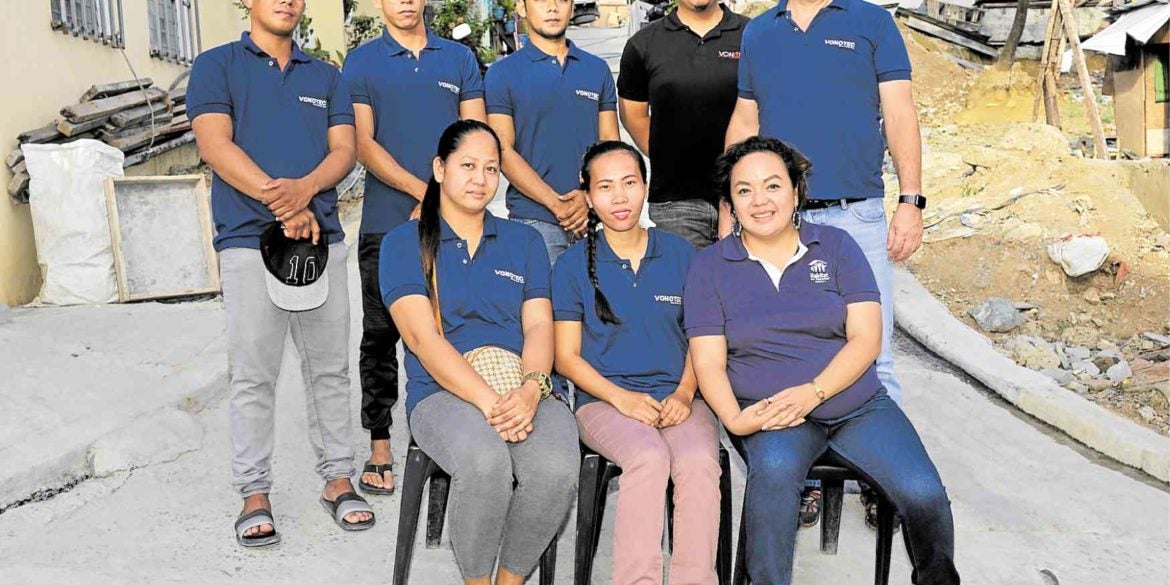 Vonotec, a company specializing in high-rise construction jobs co-founded and presided by Rebecca Garcia, has been on the lookout for people willing to train as rope access technicians (RATs) or “Spider Men.” These highly skilled individuals clean and repair at high altitudes by climbing industrial ropes using safety gear.

It all began when Vonotec cofounder and managing director Henri Muzzarelli got weary of seeing Christmas gift baskets cluttering the office till February. For many years, Vonotec spent an average of P500,000 on corporate gifts, many of which became leftovers.

Not wanting to waste resources, he decided to donate the Christmas gifts budget to charity in 2018.

The company chose Habitat for Humanity, an international organization that builds homes for the poor.

Muzzarelli also recalled that while in Mumbai, he met an entrepreneur who had a thousand workers cleaning buildings. The Indian businessman had adopted a community where he enlisted applicants to become RATs.

Vonotec adopted a Habitat community in Payatas, Bistekville 5, and offered the residents a livelihood opportunity. None of the applicants had any idea of the job until they attended the orientation.

The novices were also trained in values formation, etiquette and grooming.

Jonalyn Macorol, 26, was a domestic helper who worked 24/7 doing household chores for P7,000. In her new job, she cleans windows in deep recesses and polishes granite walls. Vonotec’s pay is more than double her earnings as a live-in maid. Macorol now sends money to her parents in Quezon.

Joyce Ann Huerto, 32, lost her job as a cook in a restaurant when it folded it up. A mother of two, she needed to augment the income of her husband, a delivery man.

She is grateful for the opportunity. “You will never be out of a job. There will always be another site to clean.”

Huerto has grown accustomed to climbing walls and working under heat and when it’s raining.

Deomar Gacos, 26, worked in an apparel factory as a packer, checker and stockman. “At Vonotec, I developed new skills such as rappelling, sealing building cracks and rescuing,” he said in Tagalog. “I became more disciplined and focused.”

Growing up in Payatas, Anjelon Aguirre, 31, has been collecting garbage since childhood. It was the only thing he knew until Vonotec gave him a new lease on life.

During an orientation of working in high altitudes, Aguirre was daunted as he was suspended on the 30th floor of the Globe tower in Bonifacio Global City. “I was shocked. The wind was strong.” Not wanting to embarrass himself in front of the female trainees, he held on.

Aguirre has since rappelled taller buildings: “There is a sense of accomplishment after cleaning a high rise. I feel I’ve contributed to its beauty.”

His paycheck is helping him build a house for his parents, feed his baby and send an allowance to his youngest sister.

A former garbage collector and construction worker, Noli Boy Yares, 31, said he has found stability as a RAT. “My parents are vendors. I am able to help my youngest sister who is studying criminology. We don’t have to worry about where the money will come,” he said.

Jamie Santos Sugay, resource development and communications director of Habitat for Humanity, cited Vonotec as its first partner for providing livelihood to the community.

“Habitat wants to give value in social preparation. Many residents came from difficult backgrounds. There has to be a change of mindset when they become a homeowner. Habitat has given them an address which they can now put in their application forms. Their house has its own bathroom,” Sugay said.

“Vonotec helps in their social preparation. Instead of being idle and drinking, they have a job. They learn to be responsible.” —CONTRIBUTED