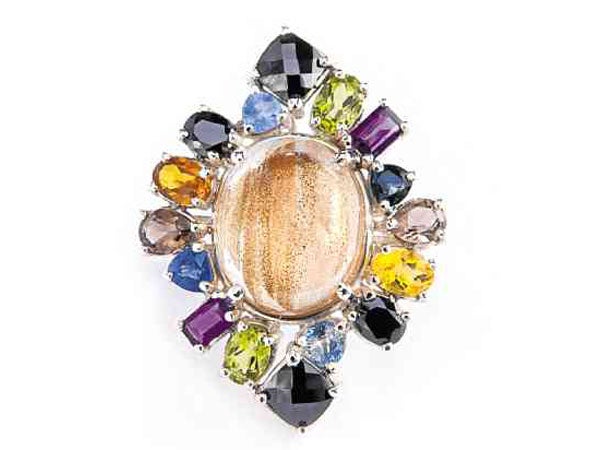 She calls it an “off-tangent” venture, since she has been mainly involved in the food and beverage business, but Aziza Mondoñedo is mighty proud of her recently released jewelry collection. It’s a feat she completed less than a year since she began designing her own trinkets.

Using semiprecious stones set in silver, Mondoñedo created 30 pieces for her “Aziza” collection, composed mostly of cocktail rings—big ones, just the way she likes them. She also has several earrings and necklaces, all inspired by ancient Greek and Egyptian civilizations.

Her pieces are also sparkly—again, just how Mondoñedo prefers her jewelry—made with her favorite materials such as rutilated quartz and aquamarine, which “capture the light really well.” She mixes in other stones like turquoise, corral, jade, onyx, agate, among others.

Mondoñedo finds rings the easiest to make. “I really like big, chunky things, which are difficult to do for earrings because it’ll be too heavy.”

It was her father who suggested she just make her own, since she loved buying them anyway.

Mondoñedo has had no training on the technicalities of jewelry making. “I went to hospitality school; my background is really culinary and restaurant management,” she says. She does all of the designing, and then seeks the help of a platero, or silversmith.

“Finding a platero was a challenge. With the first one, the settings weren’t as fine, so it looked like the silver was overpowering the stone,” says Mondoñedo.

“It took a while to get the settings right. With another one, in Cebu, it was hard because I couldn’t really oversee [production] all the time.” She now produces all of her jewelry here in Manila.

Because the business is still in its infancy, interested buyers need to contact Mondoñedo personally (average price is about P20,000). More than anything, however, the designer wants to test the reception her works will get now that it’s out in the market.

“It’s really a creative outlet,” Mondoñedo says. “Some people are into photography or painting, this is mine.”