MindanaoArt: Building a community of artists aware of their unique identity | Inquirer Lifestyle 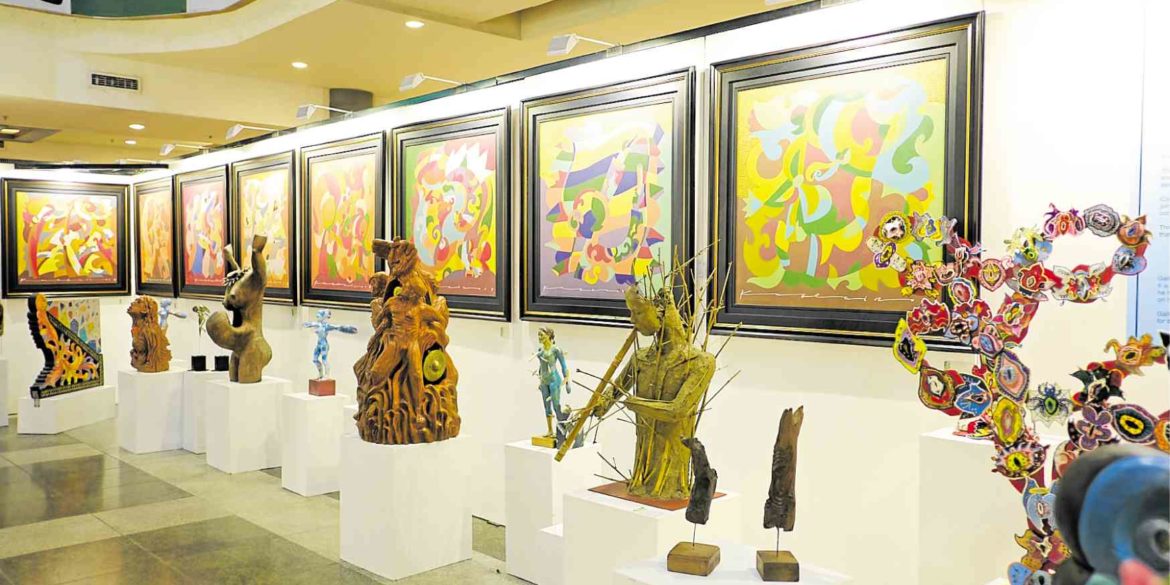 MindanaoArt: Building a community of artists aware of their unique identity

Where is Mindanao art in the Philippine art scene?

This question was raised by Vim Nadera, keynote speaker at the 1st Mindanao Art Fair, Exhibit and Conference (MindanaoArt for short) held in Davao last Oct. 4-6. Nadera, a professor at the University of the Philippines Diliman, is a multiawarded poet, essayist, playwright and novelist.

He reminded his listeners of the film “Badjao,” which won for National Artist Lamberto Avellana the Asian best director award in Tokyo in 1957. Nadera also mentioned a vision of Mindanao art by National Artist Abdulmari Asia Imao, as well as the sweet memories of Tausug dance in the pangalay by Ramon Magsaysay awardee Ligaya Fernando-Amilbangsa. She’s the wife of Datu Punjungan Amilbangsa, younger brother of the last reigning monarch of the Sulu Sultanate.

But there is more to vibrant, colorful Mindanao art than all these.

“The inspiration for MindanaoArt came when I was invited to be a resource speaker in the Visayan Islands Visual Arts Exhibit Conference (Viva ExCon) in 2016,” said Kublai Millan, a prolific artist from Cotabato City. He is also executive director and president of Lawig-Diwa Inc., recipient of the first regional art fair competitive grant offered by the national committee on art galleries of the National Commission for Culture and the Arts (NCCA).

“In Viva ExCon, I saw how art can bring people together to learn and benefit from each other and was inspired by it. We set up the Panag-abut Art Residency in 2017, which gathered thriving artists from Luzon and Visayas who interacted with artists and art students in Davao.”

He added: “MindanaoArt’s mission is to bring to life a sustainable art industry in Mindanao. The vision is to build a thriving community of artists who are aware of our identity and can thus offer what is uniquely ours.”

National Artist for Film Kidlat Tahimik delivered his message by giving a performance that highlighted the indigenous culture of the Cordilleras, and by extension, that of Mindanao.

Meanwhile, “The Twinning of Creation and Destruction” by Bintana Art Gallery featured works curated by a participating artist himself, Victor Secuya.

From an art collective named Piguras Davao, a two-panel mural done in oil, measuring 6 ft x 20 ft each, served as the central piece of the MindanaoArt exhibit. Titled “The Silent Witness,” it takes inspiration from the rich history of Davao, its indigenous mythologies, popular culture and surreal symbolism, said anthropologist Vinci Bueza of the Ateneo de Davao University.

Gallery Down South in Balai ni Kublai at Maa featured the artworks of Kublai Millan and invited artists who shared their expertise during the Artist Talks held at the Philippine Women’s College of Davao the day after the gala.

Meanwhile, Rosalie Zerrudo is the mover behind Inday Dolls featuring creations of female inmates in Iloilo City, they who embroidered vagina images on an installation that seemed flippant but underscored the plight of women in a misogynistic society.

Participating regional groups were the Talaandig soil artists from Bukidnon, the Gallery of the Peninsula and the Archipelago of Ateneo de Zamboanga University, the Museum of Three Cultures of the Capitol University in Cagayan de Oro and Likha-Caraga Inc. of Butuan City.

The only indigenous artists represented in MindanaoArt this time around were the Talaandigs of Bukidnon headed by the musician-artist who started it all 20 years ago, Rodelio “Waway” Saway.

They used soil as medium to create 39 paintings titled “Colors of the Earth.” They tell the story of the Talaandig, their beliefs, myths and discourses on cultural erosions and ecological degradation.

Adzu Gallery of the Peninsula and the Archipelago showed works of Edwin Jumalon, Lorna Fernandez and Kiko Miranda in their exhibit titled “Flujos (Flow),” curated by Janine Michelle Cabato.

Apart from the exhibit at Gaisano Mall, Lawig-Diwa’s Millan and Stella Estremera, former editor in chief of Sun Star Davao, also put up various satellite exhibits in the city.

At the Waterfront Hotel, BaiHinang’s 10th Art Exhibit, which ran till Oct. 31, will benefit the Ribbon of Hope Cancer Care Advocacy of the Davao Doctors Hospital.

The 1st Mindanao Art Fair has taken the first move to call attention to what Mindanao offers to the art world. Millan noted that galleries and art spaces hold the key.

He said: “With MindanaoArt, we are aspiring to reach out to as many galleries and art spaces and convince them that there is a lush market here [in Mindanao] just waiting to be tapped for as long as they do their work of discovering talents, promoting artists and delivering their artists’ works to the attention of the patrons.”

From Mindanao, he has also brought his art to ManilArt since 2017 through the invitation of sculptor Danny Rayos del Sol and his wife, ManilArt director Tess Rayos del Sol.

On the successful 11th ManilArt recently held at SM Aura, Millan and Danny Rayos del Sol joined forces with furniture maker Agi Pagkatipunan and poet Riza Muyot for an exhibit showcasing poetry, painting and sculpture all in a single artwork.

With all the talents that are emerging from the whole country showing diverse cultures of our islands, and the concerted efforts to bring them together, it’s not farfetched that our country will continue to be an exciting and rich source of artworks for the world to appreciate and collect. —CONTRIBUTED