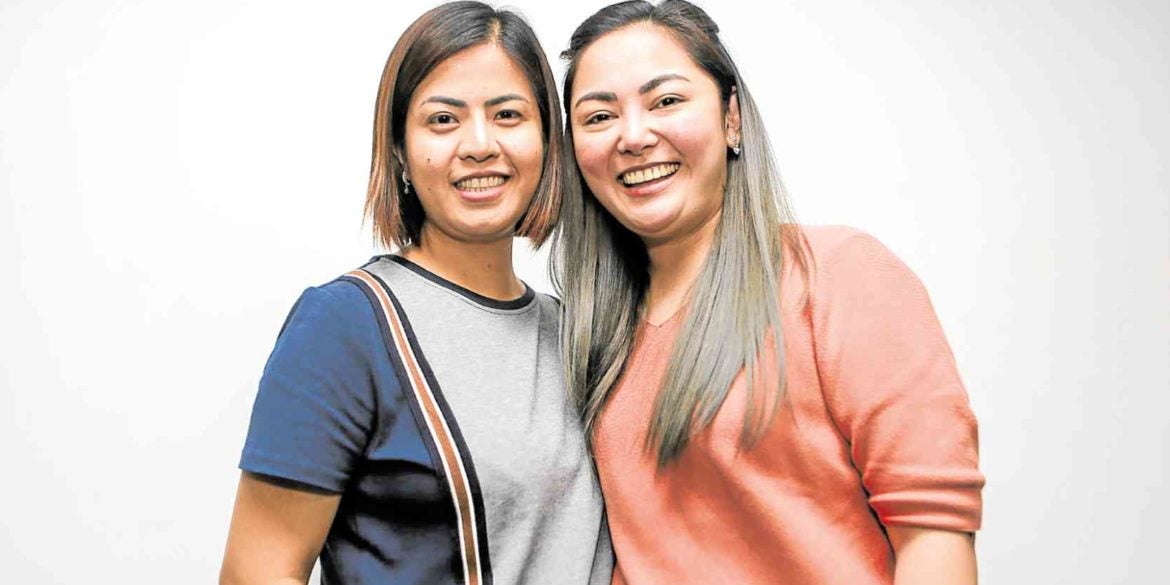 Valeri Valeriano and Christina Ong first met in 2008 through a common friend. They hung out together and the friendship grew. Together, they tried their luck in London and worked odd jobs to survive.

Valeriano was a licensed nurse, while Ong finished economics.

“The first month was easy because we had our savings,” said Ong. “But after a month of being tourists and just spending everything we had, reality kicked in. We had to work to live and survive in a foreign land.”

It didn’t matter that Valeriano was a licensed nurse in the Philippines. She still had to process her documents to find work.

And Ong had to take short courses to be in the medical field. In between the waiting, the studying and the processing, they took on odd jobs.

Valeriano worked 10 hours a day as assistant in a nursery school and Ong was a barista in the morning and waitress at night. They also did babysitting and cleaning jobs, before they found jobs in the medical field.

Valeriano and Ong lived in a cramped, studio-type flat in London. They called it a box since it could fit only a small double bed, a tiny bathroom and a kitchen that had space for only one person at a time.

“We also had a very tiny oven—the size of a toaster—on top of our tiny fridge,” said Valeriano.

But this small oven, amazingly, made them who, and brought them to, where they are now: the internationally known “Queens of Buttercream.”

It was by “sweet accident” in May 2011 that the women discovered their passion for baking. It was Mother’s Day in the United Kingdom when they baked a few cupcakes in that small oven (it could make only six at a time) to give to a friend.

Both had no background in baking. It was via a YouTube tutorial that they learned to bake and decorate. They practiced a lot and baked tons of cakes to play with flavors and tastes.

“We fell in love with baking and decorating and, before we knew it, we had already put up a business,” said Ong.

They called it Queen of Hearts Couture Cakes.

With guts and faith, the duo joined a cake decorating competition at Cake International in London, the biggest cake show in the world.

Valeriano competed in 2012 and won bronze. The year after, Ong and Valeriano both joined and each won a gold. They were joining the competitions yearly and didn’t stop competing until they finally got the Best in Category in 2014, the highest award among over a hundred of entries in the wedding category.

They also joined Salon Culinaire in London and won gold and second best in the wedding category.

Ong and Valeriano concentrated on buttercream because it was not big in the UK then. Everyone was into fondant and royal icing.

“We said if we wanted to make a name for ourselves and not compete with the masters who got years or even decades of experience, we needed to do something that was not out there yet. That was buttercream,” said Ong.

They called it contemporary buttercream art, which is their approach in innovating techniques and designs.

Every single technique showcases multifaceted art that distinguishes their style from the others. They offer unique, intricate, hand-piped and floral designs.

Valeriano and Ong started getting invitations to teach in the UK, and internationally in 2013.

“In our first workshop, we had one student,” said Ong. “The next one, we had two. And before we realized it, we were having sold-out classes in London. The invitations to teach all over the world just kept on coming in afterward.”

The multiawarded duo travels to Manila at least once a year to conduct hands-on workshops.

On Nov. 15-17, the duo, with good friend and noted cake artist Penk Ching, will hold the first-ever Cake Fiesta Manila at SMX Convention Center Manila. It will be the biggest international cake show event in Asia.

“We hope to elevate the skills and the quality of cake decorating in Asia by bringing not just the top suppliers but also the best teachers from all over the world and to challenge all the aspiring bakers and cake artists through cake competitions,” Ong said.

Valeriano added: “We are excited for the Filipinos because everything they want

to buy abroad or online which will cost them hundreds of thousands of pesos will be in Manila.”

Valeriano and Ong have already moved from a cramped unit to a three-bedroom house in Uxbridge, West London.

They still watch YouTube videos on cake décor, to make sure there’s no duplication of designs that they create.

“We are having the time of our lives now,” said Ong. “We never imagined that the simple gesture of gifting a cupcake to a friend would bring us to where we are now. It greatly changed our lives.

“We are a lot busier, though, but as we always say, busy is great. And also, we don’t live in that box anymore.”