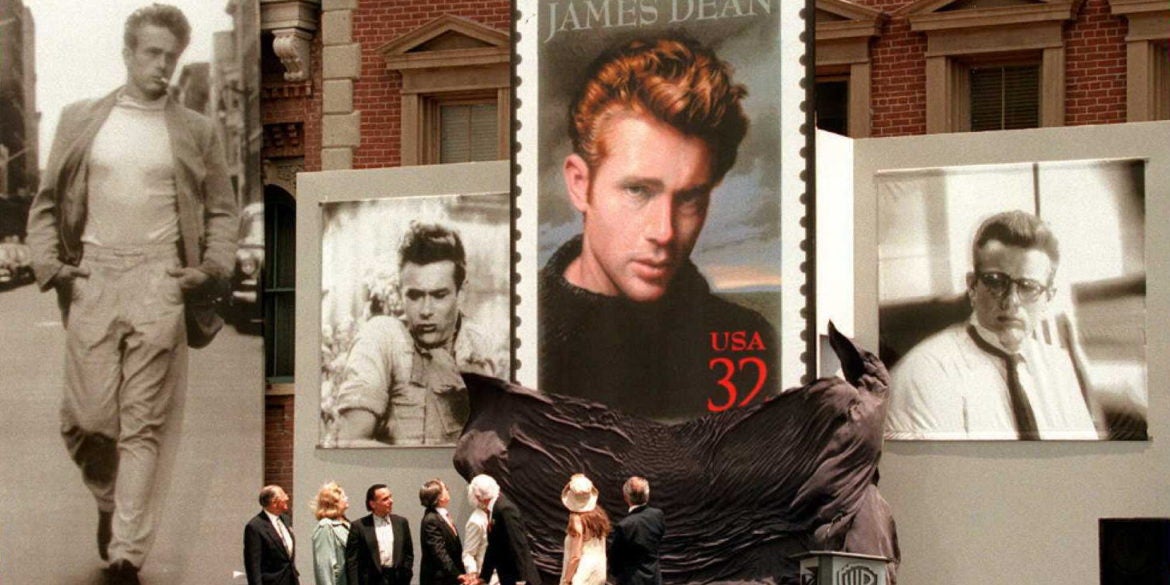 Warner Brothers studio and US Postal Service officials watch as the James Dean stamp is unveiled on the Warner Brother's Midwestern Street studio lot 24 June in Burbank, California. The legendary actor starred in only three movies, all made by Warner Brothers. Dean starred in "East of Eden," "Rebel Without a Cause" and "Giant." Dean died in a car accident in 1955 at the age of 24. AFP PHOTO Mike NELSON/mn (Photo by MIKE NELSON / AFP)

More than 60 years after his death, movie legend James Dean is set to return to the screen thanks to special effects that recreate his image from old footage and photographs.

Dean, who died aged 24 in a car crash in 1955, has been “posthumously cast” in Vietnam War action-drama “Finding Jack,” the Hollywood Reporter said Wednesday.

Production house Magic City Films obtained the rights to use Dean’s image from his family for the screen adaption of Gareth Crocker’s 2008 novel.

The book tells the story of US military dogs that were deployed and later abandoned in Vietnam.

Dean became a global star in the 1950s, acting in “Rebel Without a Cause” and “East of Eden” before his life was cut short, though he has remained a celebrated youth icon and an enduring heartthrob.

His part in the new film is as Rogan, described as a secondary lead role.

“We searched high and low for the perfect character to portray the role of Rogan, which has some extreme complex character arcs, and after months of research, we decided on James Dean,” said co-director Anton Ernst.

“We feel very honored that his family supports us and will take every precaution to ensure that his legacy as one of the most epic film stars to date is kept firmly intact.”

Dean’s image will be created through computer-generated imagery (CGI) using archive footage and photos, while another actor will provide his voice.

But the concept was not greeted with universal acclaim, with “Captain America” star Chris Evans tweeting: “This is awful. Maybe we can get a computer to paint us a new Picasso.

“The complete lack of understanding here is shameful.”

The film, which is to go into production shortly, is due for release next November.

Its makers hope the technology will be used to bring other deceased stars back on screen in new roles.