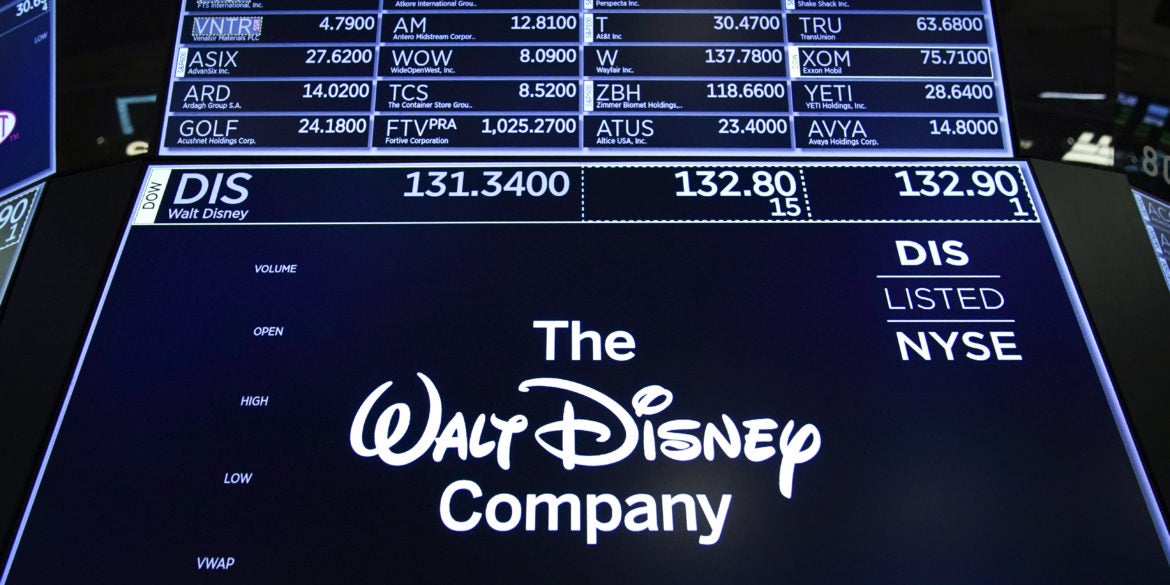 NEW YORK, NY - MAY 14: A logo for The Walt Disney Company is displayed on a trading post during the opening bell on the floor of the New York Stock Exchange (NYSE), May 14, 2019 in New York City. Disney will take full operational control over Hulu from Comcast, effective immediately, the companies announced in a press release Tuesday morning. Drew Angerer/Getty Images/AFP

Walt Disney Co. on Thursday reported better-than-expected quarterly results, fueled by the release of blockbuster films “Aladdin” and “The Lion King” as it prepared for its new streaming television service.

Disney profit in the recently ended quarter was $1.05 billion, down from $2.3 billion a year ago, on revenue that grew 34 percent to $19.1 billion.

The slump in profits came as Disney absorbed key film and television operations of 21st Century Fox and geared up for its launch of the streaming service Disney+ that aims to compete globally against Netflix and others.

“We’re excited for the launch of Disney+ on November 12.”

Iger said the company reached a deal for the service to be on Amazon’s Fire TV platform, the latest distribution agreement for Disney+.

Disney shares were up more than five percent in after-market trading following release of the earnings figures.

Revenues in the past quarter were boosted by a 52 percent rise in Disney’s studio operations with box office hits “The Lion King,” “Toy Story 4” and “Aladdin” fueling gains.

The entertainment giant expects revenue in the current quarter to be boosted by the forthcoming release of a sequel to “Frozen” and the final installment of the “Star Wars” film saga.

It will thereafter take a “hiatus” from “Star Wars” box office films but has an array of spin-off shows planned exclusively for its streaming service.

Disney has become the biggest Hollywood player with the acquisition of studio and TV assets from Rupert Murdoch’s 21st Century Fox.

However, integrating Fox into Disney has cost more than expected and the newly added studios have brought in less money than hoped.

Disney saw smaller revenue gains in its cable and broadcasting operations as well as its theme park division.

Iger would not disclose details of pre-sales of Disney+ subscriptions, but said the price — $6.99 monthly — has met with “great enthusiasm” by consumers.

The Disney+ online streaming service will debut in the United States, Canada and the Netherlands before gradually expanding internationally in Europe then rolling out worldwide.

Its films and TV shows will be available, along with the library it acquired from 21st Century Fox. That includes the “Star Wars” and Marvel superhero franchises and ABC television content.

Disney+ will also combine offerings from powerhouse brands including Pixar, with content from Hulu and sports network ESPN.

Apple last week launched a streaming television service that features a budding library of original shows starring big-name celebrities, aimed at winning over its gadget lovers at home and on the go.

The Apple TV+ on-demand streaming service launched in more than 100 countries at $4.99 per month.

Original Apple TV+ shows have so far been met with lukewarm early reviews, but the low subscription price and an offer of year-long memberships free with purchase of the company’s devices was expected to encourage viewers to tune in.

Netflix, meanwhile, has budgeted $15 billion this year for original shows, on top of the billions it has devoted to exclusive productions in recent years.

Amazon, which has deep pockets thanks to its e-commerce and cloud services, has also poured cash into original shows for its Prime Video service.

This sets up a potential spending war among the major streaming players, according to analysts.

Even more competition looms on the horizon, with AT&T’s Warner Media to launch its “HBO Max” in early 2020 after reclaiming the rights from Netflix to stream its popular television comedy “Friends.”