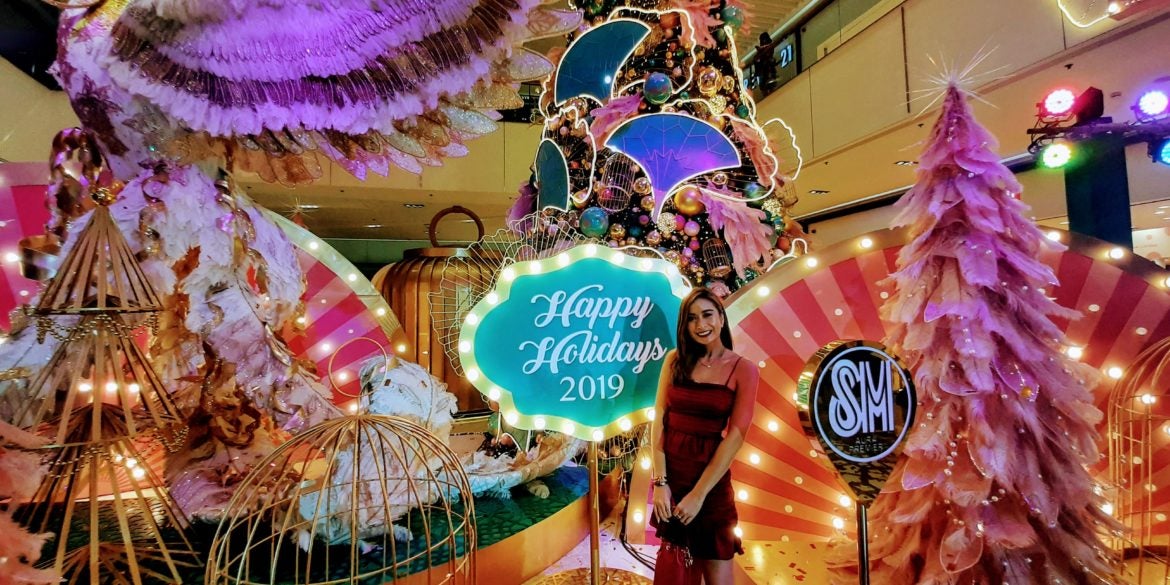 With 49 days to go before Christmas, the perennial family favorite, SM Malls, is pulling out all the stops to usher in a fabulous season for all Filipinos. A series of glittering public events saw the unveiling of Christmas trees and various holiday surprises across SM Malls this week. The anticipation for these yuletide spectacles had revelers arriving in droves. Many families have included mall festivities in their yearly traditions, with Christmas tree unveilings marking the start of their countdown to the holidays.

Here is a whole slew (or sleigh) of yuletide treats and happenings in SM Malls around the metro:

The queen mall of the continent only knows how to do things big. The tallest indoor Christmas tree in the Philippines was unveiled last November 7 at the SM Mall of Asia Central Atrium. Soaring to 60 feet, the stunner was decked in classic holiday colors of red, blue, gold, and green and topped with a sculptural starburst. An illuminated grand staircase frames the majestic piece.

No less than the Manila Philharmonic Orchestra serenaded the event with well-loved holiday tunes. They are later joined by a full regiment of chorale singers, dancers, mascots, and of course, Santa Claus. Over 100 entertainers built up to crescendo toward the Christmas tree’s grand reveal, which commenced in a hurricane of confetti.

Another highlight of the unveiling were the little VIP guests from SM Mall of Asia’s beneficiary, Bahay Tuluyan. The children are at the heart of the “SM Bears of Joy,” which donates a toy bear to the organization with every 200-peso purchase.

As the SM Mall of Asia promises to be the Filipino’s home for the holidays, it innovates with its first state-of-the-art indoor music and lights show, which can be enjoyed for free every day, from November 7 until December 31, Mondays to Fridays, at 4 PM to 10 PM, and on Saturdays and Sundays at 2 PM to 10 PM, starting November 9.

Those seeking Santa Claus can find him at the mall, with his merry band of MOA Magical Friends, every Saturday and Sunday. There is an opportunity for wishes to be heard through “Santa Mail” and greetings to be posted in a super-sized “Santa Screen” when shoppers post on social media using the hashtag  #MOAYourHomefortheHolidays.

The mall grounds make a perfect backdrop for annual holiday get-togethers, especially with spectacles such as the MOA Royal Marching Band and the much-awaited Grand Festival of Lights Parade, happening at 5:30 PM every Saturday, starting on November 30 until Christmas Day, at the North and South Arcades. The parade has been known to feature over-the-top floats tagged with hundreds of illuminated characters and capped with spectacular fireworks displays at Seaside Boulevard.

Apart from fireworks, drones are also flown to light up the night sky and complement the Christmas Forest of Lights Show at the SM MOA Central Park.

The festive refinement of chinoiserie inspires the SM Aura Premier as it officially opens its Christmas displays to the public.

Technology and traditional chinoiserie were tastefully combined to treat guests to a themed Christmas display and two interactive art and light exhibits that will be open to the public until January 7.

Guests were welcomed to its lighting ceremony last November 7, amid a festive circus performance featuring an array of international and local acrobats, jugglers, and aerialists.

The interactive art and light exhibits called “Flight of Lights” took inspiration from the mythical phoenix and features two displays that were produced in partnership with Huawei Mobile Philippines.

The first display, located by the Christmas tree, is a golden bird cage that guests can enter to experience an interactive light show. As participants form their hands into a particular shape, an illusory phoenix will emerge and fly above their heads.

The second display at the Skypark on the fifth floor features swing sets that glow brighter with every movement, allowing guests to be enthralled with the first-hand experience of creating their own light as they fly higher. Surrounding the swing sets are glowing, moving lights that mimic fireflies.

To add to the sensory experience provided by the displays, guests can also visit a harp exhibit at the HarpRoom on November 22 to 24 at the mall main entrance. Chorale performances are sure to enthrall on December 1 and 8 at the main mall atrium; a “Letters to Santa Workshop” will be held on December 6 and 7; and “Santa’s Meet and Greet” will delight kids and the kids at-heart on December 24 and 25.

In keeping with its promise of a #megabrightChristmas , SM Megamall wows shoppers with an English-themed spectacle via “Santa’s Crystal Castle,” located at the Mega Fashion Hall.

The yuletide centerpiece features a 40-ft Christmas tree inspired by the bright street lights of London. It glows with illuminated strings of gems, crystals, snowflakes, metallic trimmings, and features English elements, such as a red telephone booth and toy soldier ornaments. It was unveiled last November 8 amid a flurry of theatrical and circus performances, featuring ballerinas in snow princess costumes, elfin dancers, acrobats, and aerial performers.

SM Megamall also partners with Canon Philippines for its first interactive “Crystal Room,” which features over a thousand fairy lights in an interactive and camera-friendly display space for shoppers looking to snazz up their holiday albums.

To make Christmas celebrations more special for younger shoppers, Thomas and Friends will perform holiday dance numbers at the Event Center of Mega A from December 2 to 12. Exciting games, costume contests, and amazing raffle prizes await.

The entire family can also look forward to a Lego Christmas event from December 16 to 25 at SM Megamall. Lego fans can enjoy a meet-and-greet with Lego characters, a free play area, a family Lego building competition, and photo ops at the Lego Christmas tree display.

The king of the north malls, SM City North EDSA, let it snow as it unveiled its Christmas display entitled “Magical Holiday” last November 8 at The Block Atrium. Guests were treated to a winter wonderland dominated by a 45-ft. Christmas tree decked in cascading crystal lights that resemble curtains of icicles and snowflakes.

“Year after year, we at SM Supermalls work tirelessly to bring Christmas experiences that awe and inspire our shoppers to create unforgettable moments at SM. This year, we bring the magic of ice and snow to life through a fun-filled Christmas experience at Magical Holiday at SM City North EDSA to light up the holiday season for our shoppers,” said SM Supermalls COO Steven Tan.

Gracing the launch is the country’s very own queen, Miss Universe 2015 Pia Wurtzbach.
The royal experience continued with magical performances by singer Marynor Madamesila and Ballet Manila, which was accompanied by artistic director and Prima Ballerina Liza Macuja-Elizalde.

Other holiday calendar highlights include the upcoming release of Disney’s “Frozen 2”. Kids and families will be given the opportunity to meet and greet Elsa and Anna on November 29, 30, and December 1 at The Block Atrium. Frozen 2 merchandise will also be available at The Block Atrium to complete the magical malling experience.

Shoppers looking to trip the light fantastic can gather inspiration from Ballet Manila on December 14 and 21 at The Block.

Shoppers can catch other Christmas activities at SM City North EDSA, including “A Magical Science Show” on November 10 and December 14; “Santa Meet and Greet” on December 8, 15, 22, to 25; and “Christmas Carols by National University Chorale” on December 15, all at The Block.

Firework shows will light up the northern skies on November 8 and December 14, 21, and 28; and Christmas music lovers can wax nostalgic in “Skygarden Live: Christmas Series,” a concert on December 6, 13, 20, and 27 at the Skygarden. INQUIRER.net BrandRoom/AK/VT