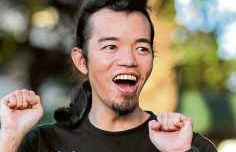 MANILA, Philippines — Comics writer and artist Manuel Luis “Manix” Abrera has won the National Book Award for Best Book of Graphic Literature for a collection of his “Kikomachine!” comic strips, which originally appeared in the Inquirer.

The winners, who were announced on Nov. 4, will receive cash prizes and trophies in ceremonies on Nov. 23 at the National Museum in Manila.

“I want to cry out of happiness,” Abrera said of the award in Filipino. “It feels surreal to win the National Book Award for Kikomachine Komix. This is the work that I really focus on. I have learned a lot and continue to learn many things working on this daily strip, from the challenges of space to the many possibilities of the comic strip.”

Founded in 1981, the MCC is a nonprofit, nonstock organization of professional literary critics and newspaper columnists who believe that Philippine books deserve much more attention than they usually get from business, the media and the general public.

In 2008, the MCC entered into an agreement with the NBDB to institutionalize the National Book Awards to better honor Philippine publishers and authors.

“Kikomachine Komix! XIV: Alaala ng Kinabukasan” is the 14th such collection from Visprint, the first of which was published in 2005.

It is Abrera’s third National Book Award, having won in the same category in 2015 for “News Hardcore! Hukbong Sandatahan ng Kahaggardan!” and 2014 for “14,” both published by Visprint.

His father, editorial cartoonist and Inquirer pioneer Jess Abrera, also won the National Book Award in 2000 for “The Best of A.Lipin,” a collection of strips that also first appeared in the Inquirer.

Abrera began writing and drawing “Kikomachine” for the Inquirer in 2001. He had worked on the strip itself since his freshman days at the University of the Philippines’ College of Fine Arts in Diliman.

“Kikomachine” ostensibly followed a group of friends in college but has since ventured into much more eclectic and existential territory discussing Filipino culture and humor.

“I just realized I’ve been doing this for almost 20 years,” Abrera said. He also noticed that his storytelling style had changed through the years as the range of topics had also expanded.

“But I have maintained its being Pinoy and always champion our rich culture and beliefs,” he said.

“Kikomachine was able to shift from being the usual 3-4 panel comics strip about college life with a typical punchline to a whole new level of humor writing,” Ramirez said.