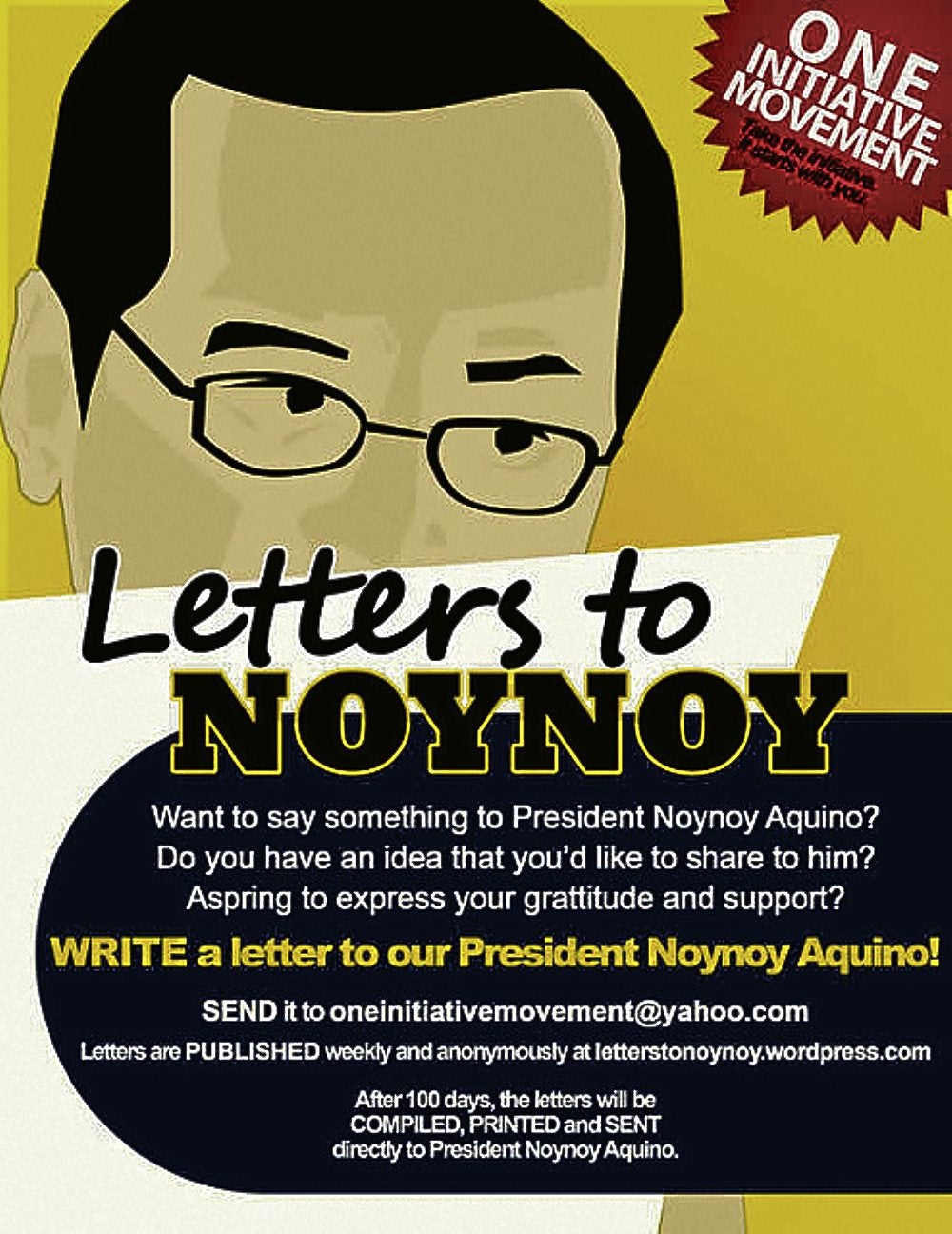 Students send a letter to Aquino—and he responds

The advent of new technologies has made communication easier for everyone. The Internet has literally replaced the roads and vehicles needed to transport messages. Communicating takes the form of 160 characters on Twitter, or posting on Facebook walls, or video chatting with a person halfway across the world.

Letters—formal, informal, or even chain mail and spam—come in the form of electronic mail.

Even in this landscape, how do we send a message to the President of the Philippines? Do we tweet P-Noy? Shout out or poke him on his FB wall? E-mail him?

Early in Aquino’s term, students from Ateneo de Manila University, in One Initiative Movement, started a project in the hope that their message will reach the then newly elected president. They wanted to express their dreams, suggest ways to improve society, and simply air their innermost musings—regardless of whether they were for or against his administration.

How? Through the snail mail—a medium our generation hardly uses now.

One Initiative Movement was started by Ateneans who wanted to promote engaged citizenship, sociopolitical awareness and proactive community welfare programs by initiating the changes themselves.

The group wanted to correct the false impression that the youth is becoming apathetic about issues affecting society. The “Letters to Noynoy” project was launched right after he was elected president in 2010, with a large number of his votes coming from the youth.

Members of One Initiative Movement wanted to involve fellow students by asking for their ideas, perceptions and criticisms, they wanted P-Noy to know.

“Communicating with the President of the Philippines is a daunting task,” says Lance Chua, founder of the One Initiative Movement. “We never imagined that we would get a reply from him, ever.”

But that was not the only challenge the group encountered in the project. It took some time before they actually had enough letters to send to Malacañang. Through the efforts of students, and with support from some professors who encouraged their students to write, the letters were finally sent.

Just recently, at the start of the New Year, the President replied.

The President said in his letter on January 10:

“I am heartened by your wise words and your keen observations on how our government is working to deliver our promise of a more equitably progressive Philippines. I believe that this compilation attests to the vibrancy of our young Filipinos, given the diversity of the topics you have taken time to discuss—from conversations with insightful cab drivers to the integrity of our justice system, from a scrutiny of the coffee industry to the longed for success of the Reproductive Health Bill.

“Your openness to engage in proactive discourse is admirable, and it is my hope that you shall inspire more of your generation to imbibe the same values.”

The success of the “Letters to Noynoy” project was measured not only by a personal response from P-Noy, but also by the youth taking action, even through the simple act of writing a letter. Today’s young people present the potential to create change; however, not everyone is aware of his/her capabilities to make a difference in society. Perhaps, this is the start.

The Internet and social-networking sites can be used as tools to disseminate information and spur action among the young.

“We have been very innovative in our public information campaigns,” says David de Castro, One Initiative Movement president.

“We are not limiting ourselves to street protests, but we are utilizing modern media, such as the Internet, for cyber-activism. Our networks have grown; youth participation in various social issues has reached global proportions,” he says.

“I find this a great breakthrough, as we have come to recognize that problems which beset us today are not limited to one country; everyone in the world experiences the same issues,” he adds.

We are often dubbed leaders of tomorrow, but it is more essential to realize that we are leaders now. Youth participation is needed, especially for a developing country like ours; we need movers and shakers who dare to change reality, and who are not afraid to commit mistakes.

Some might argue that the young are too idealistic and can be unrealistic in setting their hopes and dreams. But at a time when cynicism and helplessness grip society, we need to hope for better things and work to make them happen, one initiative at a time.