Havana at 500: a city in four portraits | Inquirer Lifestyle 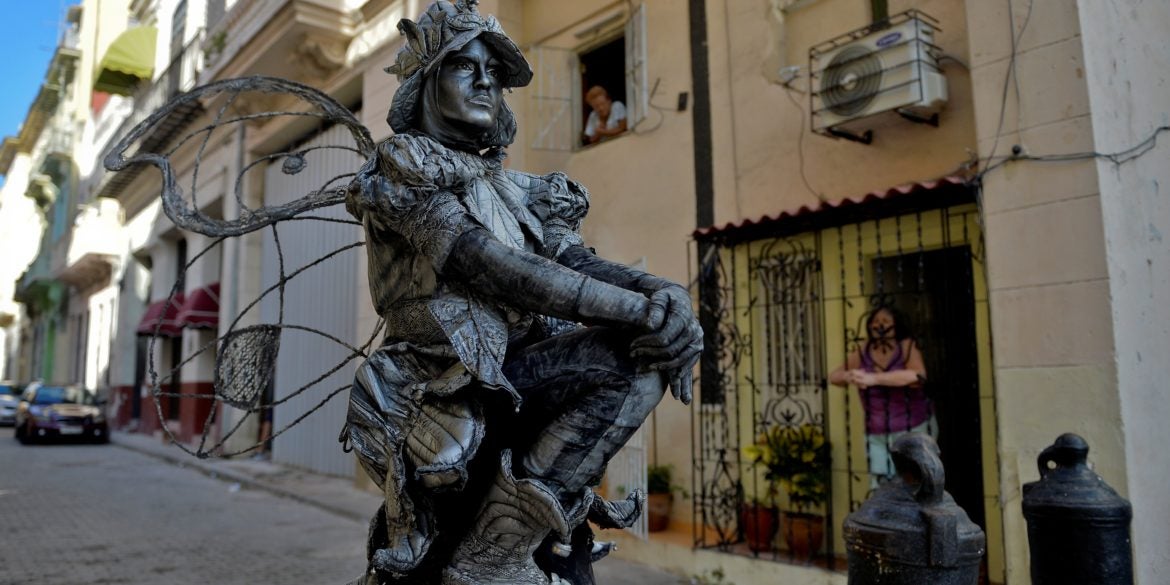 Cuban Beatriz Estevez, 29, performs as a human statue in the streets of Havana on October 15, 2019. - Estevez dropped out of law school and found her personal and economic fulfillment in art. Daughter of a naval engineer, Beatriz earns in one day what her father earns in a month of work for the Cuban state. Havana residents say the Malecon -esplanade along the waterfront- is their sofa, and that he who sits there looking to the water is sad, and he who looks to the city is happy. Their stories build a 500-year-old Havana. (Photo by YAMIL LAGE / AFP)

Havana at 500: a city in four portraits

Half a century since its founding by Spanish colonists, the Cuban capital Havana has become a byword for Latin American romance and revolutionary nostalgia.

As the city prepares to celebrate its 500th anniversary on November 16, AFP interviewed four Havana residents, whose lives reflect its history and its recent changes.

Yosbel Sosa, 33, drives what he calls a “time machine” — a black Chevrolet Impala with red and white seats, dating to 1959, the year of late leader Fidel Castro’s revolution.

In it, he drives tourists around the city’s historic sites: the restored dome of the Capitol, the colonial mansions, Art Deco buildings, Revolution Square and the picturesque Malecon seafront promenade.

“It helps to have an old-fashioned car,” he says. “Tourists want to visit the old part of town and learn the history of what happened 500 years ago.”

Yosbel was studying law but gave up to work in the tourism sector, where he can earn more than the usual $50 monthly salary of a state employee.

After a day driving the classic car around, he takes public transport to get home to his wife and two children.

“Sometimes I leave for work very early and I come home late when my children are already asleep,” he says.

“It makes me sad not to see them and play with them. But my family is happy with my job.”

Roberto Molina is one of the many people who sit on the Malecon with a fishing rod dangling in the Atlantic.

At 69, he has spent nearly half his life fishing like this, his face weather-beaten, walking down to the sea each day from his home a few hundred meters away.

Hundreds of fishermen of fortune like Molina catch what they can with hook and line to eat or sell to private restaurants.

“There are fish in Havana, he says. “But you have to be the first to catch them.”

In 1994 tens of thousands of people took to the sea from this bay in rafts, trying to flee the economic crisis that stemmed from the collapse of Cuba’s ally the Soviet Union.

Crowds gathered on the Malecon to protest, Molina recalls. “Then he came along,” he says, miming the shape of a beard on his chin to refer to Fidel Castro. “And everyone went home.”

When not fishing, Molina takes walks, queues to do paperwork and picks up food parcels provided by the state. All with good humor.

“Havana people are cheerful,” he says. “If you succeed today, all the better. If you don’t succeed tomorrow, too bad. One way or another you’ll succeed in the end.”

Beatriz Estevez, 29, gave up her law studies and turned to the arts. Reforms in the years since Fidel Castro stepped aside in 2008 have made it easier for Cubans to be self-employed.

Beatriz makes handicrafts and stands dressed as a silver fairy in the busy Calle Obispo, a street of shops and restaurants, where tourists give coins to take photos with her.

“My dad yelled” when he heard of her decision, she says. “But then he said, my daughter, you are earning in a day what I make in a month. I can’t complain.”

Beatriz’s father is a naval engineer.

At the end of the day she takes a boat across the bay to her home in Regla. Her neighborhood is like “a country village in the city.”

“People from Regla are more spiritual and relaxed,” she says. “Everyone knows one other. People sit down in the doorways of their homes.”

Doctor Alina Gonzalez does not have a car, and recent US oil sanctions have made the public transport network even more difficult.

So the 57-year-old geriatric doctor walks the two kilometers (1.2 miles) to her job at the Centre for Longevity Studies.

“We doctors are of the people. We are ordinary Cubans and that helps our patients to relate to us,” she says.

“The problems they have are the same ones we have.”

Since 1962, a US embargo have made daily life in Cuba hard. Complications have increased in recent months after the US tightened trade restrictions further.

Alina looks after some of Cuba’s 2,000 centenarians. The island’s 11.2 million people have an average life expectancy of 79.5 years — comparable to that of the rich world.

“It is true that there are difficulties. Sometimes it is a challenge. I have private talks with my refrigerator. I open it and say, what am I going to cook today?”

Alina is married with a daughter. Seven years ago she was diagnosed with breast cancer. She underwent treatment and survived.

She says she has an appetite to continue enjoying Havana, “walking through its beautiful parks, along the Malecon, in all its splendor, for a long time yet.”