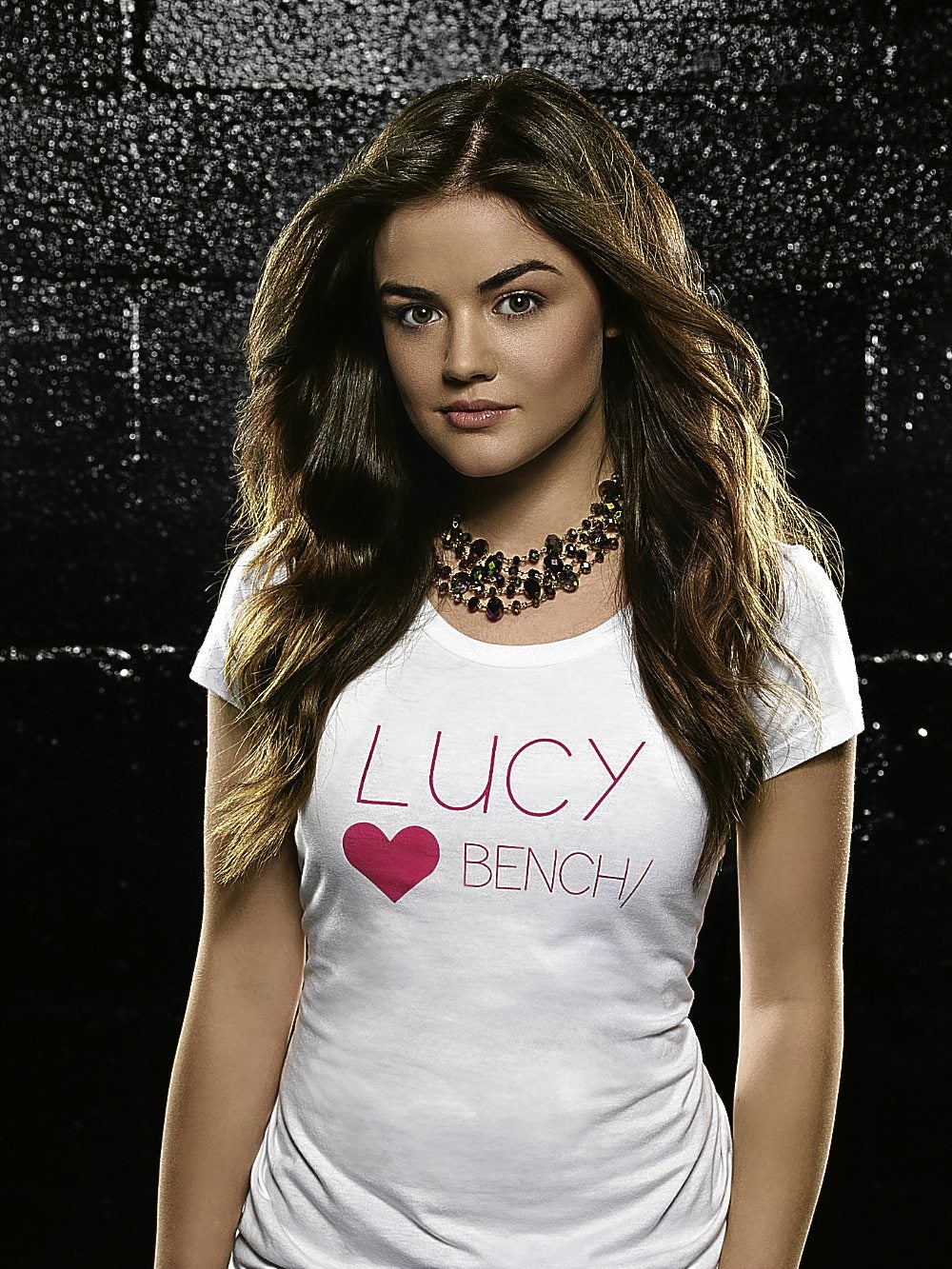 Confessions of a ‘pretty little liar’

“I drink too much coffee and laugh too loud. And live on hummus.” That’s how 22-year-old “Pretty Little Liars” star Lucy Hale describes herself on her Twitter. But, of course, that’s barely scratching the surface.

Lucky Filipino fans had the chance to get to know the American sweetheart better in a special fashion show/meet-and-greet on Feb. 11 at SMX Convention Center, courtesy of giant local brand Bench.

After models sashayed down the runway in edgy pieces from Bench’s OJ Americana line, host Tim Yap brought out the petite stunner in red sequined cropped jacket, dark skinny jeans and trademark HerBench tee. The look of awe was evident on her face, as she was greeted by hordes of avid, screaming “Liars” followers who wanted to see their idol up close.

Warm and chatty, Lucy engaged the audience in friendly banter, occasionally complimenting other ladies on their outfits. She even spotted a fan, who was holding up a portrait sketch of her and got as close as she dared, burly bouncers permitting. “Ang lambot ng kamay niya! (Her hand is so soft!)” blurted out a fan who had tumbled onto the steps of the stage just to touch Lucy’s hand. Crazy, yes, but who wouldn’t be when a TV star is literally within reach?

Lucy, who plays Aria Montgomery on the hit US TV series, is also known for her roles as Becca Sommers in “Bionic Woman,” Rose Baker in “Privileged,” and Sherrie in the horror film “Scream 4.”

She is Bench’s latest addition to its roster of foreign celebrity endorsers, hot on the heels of Bruno Mars and Michael Trevino, who plays hunky werewolf Tyler in “The Vampire Diaries.”

From the moment she landed in Manila, the star had been constantly tweeting praises (@lucyyhale) about good ol’ Filipino hospitality.

“I’ve never felt so welcome,” she gushed, even posting a picture of her and Hollywood makeup artist Scotty Cunha, wearing flower necklaces at NAIA. Oh, and she thinks ube is amazing.

She has a new Filipino “adoptive dad.” Lucy fondly calls Bench magnate Ben Chan “Daddy Warbucks” in reference to the character in the “Annie” musical. “He’s so amazing and so welcoming,” she said with a big grin.

The Bench endorsement offer was a “no-brainer” for her. “I loved the clothes, I didn’t even give it a second thought,” Lucy said in the Q&A with the press. “It perfectly describes my style.” Which brings us to the next…

She calls her personal style “experimental.”

“I’d say that since I started in this show, I’ve seen Lucy transform into Aria. She’s definitely helped me to experiment more, kind of all over the place.”

On the other hand, she admits it’s not all “her”—she has a stylist to help put her outfits together. “I just love clothes, so if it looks cute, I want it.” Spoken like a true female.

Aria might wear Bench, too. “I actually just got asked if I would wear Bench on the show and I think I’m gonna go to the wardrobe department and ask. Let’s bring Bench and Philippines to the US!” Lucy told the roaring crowd.

The third season starts filming in April; we’ll definitely be on the lookout for some Bench pieces.

Aside from acting, Lucy had showed off her singing talent at a young age in the talent show “American Juniors,” and more recently, in the film “A Cinderella Story: Once Upon A Song.” Naturally, her fans wanted to hear her sing, but Lucy playfully hid behind a hand amid “Sample! Sample!” chants from her (mostly) female tween fan base. Sorry, kids, maybe next time.

She likes country music. She couldn’t say anything specific, but she hinted at the possible theme for her upcoming music. Coming from a Britney Spears fan who’s influenced by Rihanna and Lady Gaga? That might make for some pretty interesting tunes.

There’s an “Ezria” shocker in season finale. Are they or aren’t they? It seems that the fate of Aria’s sizzling secret romance with her cute ex-English teacher, Ezra Fitz, is about to be revealed. “I can’t wait for you guys to see the season finale!” Lucy teased the wildly cheering audience.

She thinks David Archuleta is adorable. At a party held in her honor Friday night, Lucy bumped into the charming “American Idol” alumnus, who’s also here in Manila.

“Ok so I met one of the most adorable people ever with the most incredible voice @davidarchie seriously… what a talent,” she tweeted right after, and David heartily replied. Should “Ezria” fans be jealous? Only time—and Twitter feeds—will tell.

“Oh my gosh yall! Best day of my life. Hands down. There are no words. And this smile will be on my face for a long time. Thank u!” She tweeted after the event. The amazed look on her pretty little face and the decibel levels at the venue just about sum it up.