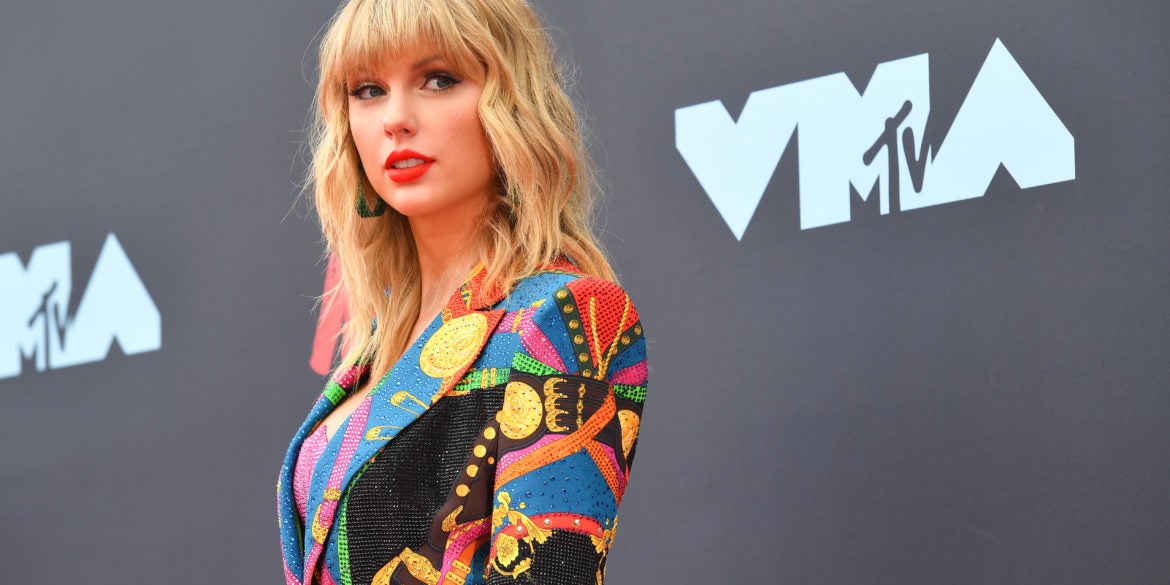 (FILES) In this file photo taken on August 26, 2019 US singer-songwriter Taylor Swift arrives for the 2019 MTV Video Music Awards at the Prudential Center in Newark, New Jersey. - Taylor Swift's former label on November 15, 2019 dubbed as "false" the superstar's accusations that it was preventing her from performing her songs on television or releasing a Netflix documentary. (Photo by Johannes EISELE / AFP)

Unleash the Swifties: Taylor Swift has tapped her millions-strong social media fan base to pressure the heads of her former label, who she says are wielding “tyrannical control” over her music.

The global superstar’s latest chess move has reignited her months-long public feud with Big Machine Label Group, spotlighting the music industry’s age-old issue of who keeps the keys to an artist’s work.

The 29-year-old pop singer known for her calculating social media strategy dropped a Tumblr post late Thursday accusing the Big Machine heads of blocking her from performing on television — she’s set to do a career-spanning medley at this month’s American Music Awards, where she’ll receive an Artist of the Decade honor — and releasing a Netflix documentary.

She implied Big Machine — which has rebuffed the accusations — was reacting to her plans to re-record her early albums, by saying that performing on television “would be re-recording my music before I’m allowed to next year.”

This summer Swift began publicly sparring with industry mogul Scooter Braun over his company’s purchase of her previous label of a decade, which gave him a majority stake in the master recordings of her first six albums.

Swift vowed to regain command of those albums by making her own new masters, which she says she’s contractually allowed to start on in November 2020.

In her post pleading for support from fans and fellow artists, Swift alluded to bullying from Braun and Big Machine CEO Scott Borchetta.

Both parties have referenced a dispute over millions of dollars but voiced disagreement over who owes what.

“The message being sent to me is very clear,” Swift said.

“Basically, be a good little girl and shut up,” she wrote in her post. “Or you’ll be punished.”

Swift is now at Universal, with a contract under which she owns her work.

Performing for a television broadcast creates an “ephemeral recording,” which could be subject to Big Machine’s green light — though pinpointing legal specifics is impossible without reading Swift’s contract with Big Machine, which has not been made public.

Susan Genco, a music industry lawyer and lecturer at the University of California, Los Angeles, said if the contract contains a typical re-record provision, the label may have a “technical argument” that a taped television performance could violate her agreement.

“But it is certainly not the intent of the re-record provision and, to my knowledge, not a position that a label has taken before,” she told AFP.

“Keeping an artist from performing her songs on television seems counterintuitive and against the label’s interest — as it promotes the catalog which they own.”

Swift’s case highlights the schism between a new breed of artists adamant about holding the reins, and members of music’s old guard who have long gripped them.

The owner of lucrative masters — one-of-a-kind source material used to create vinyls, CDs and digital copies — is able to dictate how songs are reproduced and sold.

Record companies have almost always kept those rights, justified by the financial risks labels take by supporting performers throughout their contracts.

The late legend Prince famously championed artists’ rights to their work in the 1990s, rebelling against his label Warner over money and control of his music.

He took the battle public by etching the word “slave” on his cheek and changing his name to an unpronounceable “love symbol” to take control of his image, with many media outlets began referring to him as “the artist formerly known as Prince.”

“If you don’t own your masters, your master owns you,” the superstar told Rolling Stone in 1996.

Swift has revived debate over music ownership in an era where  streaming rules, and young artists who are savvy with social media increasingly are demanding more autonomy.

“Signing and retaining the biggest acts in the world — or even a brand new act that there’s a bidding war for — has gotten a lot more expensive,” said Larry Miller, director of New York University’s music business program.

“Some companies are occasionally willing to do things that have been contrary to the way their business model works.”

Still, Miller said the major labels retain leverage when it comes to creating top stars: “In 2019 anyone can make a piece of music today on their laptop and smash it out.”

But “there’s a big difference between being theoretically discoverable and having an army of people…to make you the biggest artist,” he said.

Swift, certainly a top global artist, says her stand is in part to give a voice to less powerful musicians.

“I feel very strongly that sharing what is happening to me could change the awareness level for other artists and potentially help them avoid a similar fate,” she said.