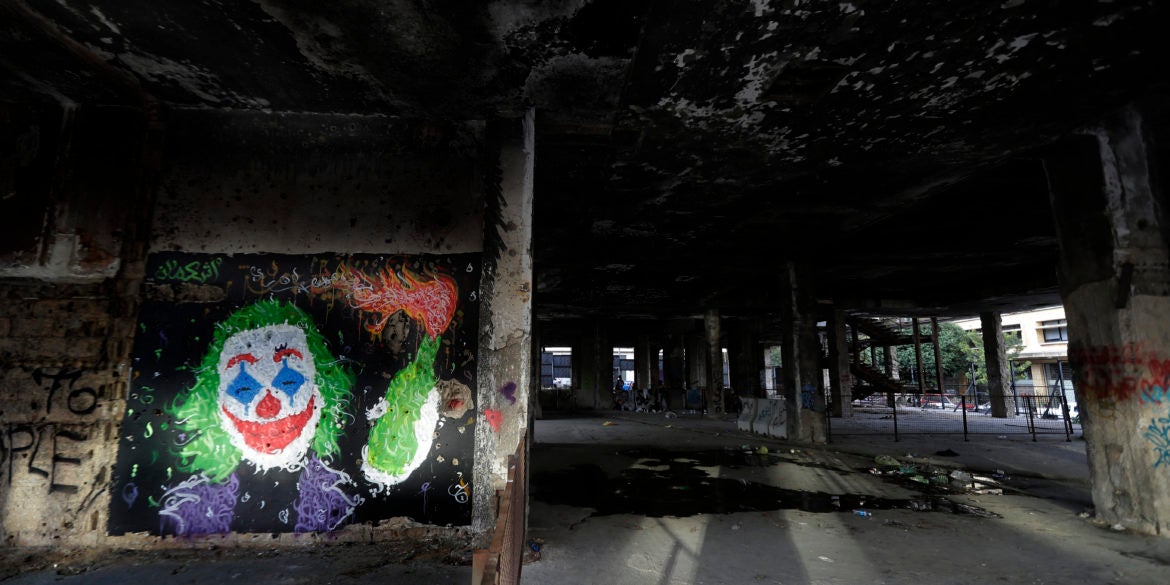 A graffiti by street artist Ashekman is sprayed inside "the Egg" building in Lebanon's capital Beirut on November 11, 2019. - Since October 17, the chanting of tens of thousands of Lebanese denouncing the political elite have shaken the normally staid district around two Beirut squares, Martyrs' and Riad Al Solh. (Photo by JOSEPH EID / AFP)

A majestic phoenix spreads its wings as Hayat Nazer adds a splash of colour to a Beirut wall. As Lebanon’s uprising enters its second month, graffiti has enveloped the capital’s posh downtown.

Since October 17, the chanting of tens of thousands of Lebanese denouncing the political elite have shaken the normally staid district around two Beirut squares — Martyrs’ and Riad Al Solh.

Nazer, a 32-year-old artist, is one of the protesters who would not normally frequent the area, famed for luxury boutiques and elegant buildings. But the unprecedented protests also offered her a first experience with street art.

“I decided to go out in the street to be inspired by the people,” she said during a cigarette break, standing next to pots of red, green and yellow paint.

Then she turned to place the final brushstroke on the mythical bird emerging from a burning forest — a reference to the fires that ravaged Lebanon’s mountains shortly before the protests began.

“The phoenix reminds us that the Lebanese shouldn’t lose hope. When we fall, we need to rise up and fly to freedom, to claim our rights,” she said.

The long concrete barrier Nazer was painting protects a United Nations building, but has been named the “wall of the revolution” for the graffiti adorning it.

A ballerina pirouettes under shells, accompanied by the slogan “Rise up”. Further down, a big purple hand flashes a V for victory.

On nearby buildings, various causes are championed with spray-painted and stencilled slogans: “Our revolution is feminist”; “LGBT rights, love is not a crime”; and “We will burn your palaces”.

The contrast is striking compared with the nearby opulence of a district that was controversially rebuilt after being ravaged during the 1975-1990 civil war.

Today a Rolex clock tower stands in front of a parliament cordoned off by security forces. Working-class souks have been replaced by a modern commercial centre, home to banks and French luxury brands.

The reconstruction of the district, famed for its stone buildings in neo-Venetian and neo-Moorish style, was led by Solidere, the real estate company of billionaire former prime minister Rafiq Hariri.

Its detractors say the project killed the soul of a formerly vibrant neighourhood in order to attract Gulf investment and wealthy tourists.

“This city has become an icon of capitalism,” said artist and rights activist Selim Mawad.

He jumped onto a plastic barricade to retouch a mural of stylised bulls alongside the slogan: “What is the future of our revolution?”

Lebanon’s uprising — like protests elsewhere in the Middle East and Latin America — is both political and social.

“It’s also about personal liberation, which is the foundation of a revolution,” Mawad said.

He sees symbolism in graffiti.

“People say, ‘I can’t touch this building, I can’t live there, so I’ll leave my mark on it’,” the paint-spattered artist told AFP.

One day, assailants attacked the protesters in the area where Mawad was painting his mural. He was beaten and his bicycle stolen.

“Give back the stolen money — and don’t forget the bike,” he later painted next to a picture of a bull brandishing a red bicycle.

He hopes the paintings will be preserved. “It’s the memory of an uprising. If they erase them, we will forget.”

Nearby, Rida Mawla left a meeting and decided to take a walk in the city centre, something he said he never previously did.

“In theory it’s the place where everyone should meet, but the ruling class has taken possession of it,” he said.

He pointed out his favourite graffiti, a big black tag scrawled on a wall: “Beirut has spoken”.

Cover image: A graffiti by street artist Ashekman is sprayed inside “the Egg” building in Lebanon’s capital Beirut on November 11, 2019. (Photo by JOSEPH EID / AFP)