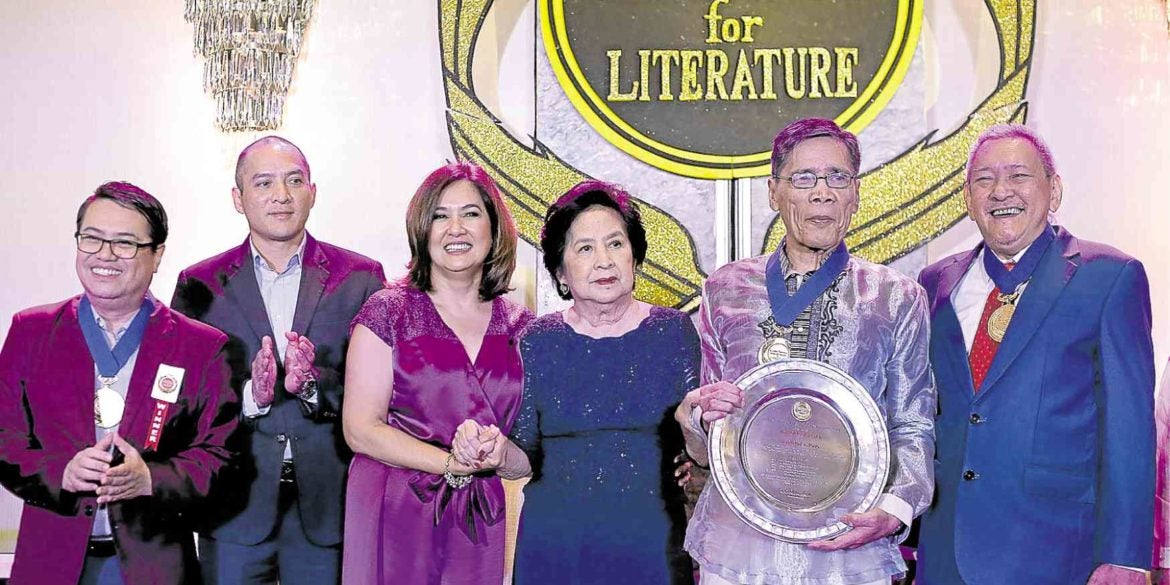 It was the perfect melding of the modern and the classic, the new and the old, the unexpected and the familiar. The country’s longest running and most important literary contest, the Carlos Palanca Memorial Awards for Literature, which is now on its 69th year, featured more first-time winners than returning winners. In her sponsor’s remarks, Criselda “Dang” Cecilio-Palanca noted: “56 authors emerged as winners this year, more than half of whom, or 32, are first-time winners, with 24 being former winners. This represents a significant departure from last year’s figures, when former winners outnumbered the first-time winners.” This year, the awards had 1,167 entries in 22 categories and featured the Novel in English and in Filipino, categories only open every other year.

The Palanca Awards were handed out at the Rigodon Ballroom of the Peninsula Manila last Nov. 8, an occasion that was part literary baptism and part family reunion, where aspiring writers, and veteran wordsmiths were in the same room as National Artists for Literature Bienvenido Lumbera and F. Sionil José.

The evening’s guest of honor and recipient of the Gawad Dangal ng Lahi Award was revered writer and teacher Dr. Cristina Pantoja-Hidalgo, who shared some of her favorite Palanca memories, asked, “How long will writers keep on wanting and trying to produce the kind of writing that wins a Palanca award?” She emphasized the importance of writing and publishing as a civic responsibility and not just a venue for profit or reward. “Personally, I remain committed to writing in the best way I know how, no matter how small the audience for this kind of writing might be.”

Mythology was on the mind of first-time winner Jerking Guzman Pingol, who won the grand prize for Novel in Filipino for “Agaw-Anino.” Pingol is an art director for GMA News and Public Affairs and considers himself a graphic novelist by vocation but found he couldn’t tell this particular tale in panels in the time he had available, so he decided to write it out as text instead. “It’s about a story about a group of kids who grew up where aswang and other creatures were considered complete myths and they set out to find these,” he explained. “What would you do if you found them?”

The Manila correspondent for the Washington Post, Regine Miren Cabato won first prize for poetry in English on her first try with a collection appropriately called “Notes from the Field.” She explains that “the conceit of the series is reportage or witness poetry with the persona being a journalist in places of conflict, with reflections on places like Mindanao, where I’m from.” Some of the poems were written while she was in college at the Ateneo and the others done in continuation for a year. “It’s good to know the work resonated with people,” said Cabato, who will be putting out a chapbook soon.

Jocelyn G. Nicolas decided to write about the annulment of her marriage. It at the last minute that she decided to go to the Palanca offices and witnessed first-hand the bedlam that came when writers descended on the office with their submissions. It turned out to be worth it, as the first-time submission became her first Palanca, first prize for Essay in English, “The Art of the Missing,” an experience she described as truly cathartic.

The evening also featured those who had won before, of course. Victoria “Vicky” Bravo won her sixth Palanca and managed a rare feat by winning the second prize in the same category—Short Story for Children—in two different language divisions —Filipino and English—in the same year. The first prize winner in the Short Story for Children in English was Reni Roxas, the mastermind behind publisher Tahahan Books.

For the Short Story in English, Kathleen “Kate” Osias won her second first prize—her fifth Palanca—for “James Machine,” which is “about a woman grieving using what was available to her in terms of science and technology to be able to suspend the grief.” The bank auditor and self-described “Tiger-ish mom” is working on a second book to follow her first collection, 2018’s “Heroes, Villains, and Other Women.”

At one point, Reine Arcache Melvin said the manuscript for “The Betrayed,” which won the grand prize for Novel in English, was out of control: “It was 800-900 pages. It was like pouring paint on the floor and then, with a knife, slowly scraping off what was extraneous, trying to find the picture.” For over two decades, Melvin worked for the International Herald Tribune and is now a freelance editor and journalist based in Paris. This novel has its origins in Melvin’s first book, the 1999 short story collection “A Normal Life.” “My stories really start with the characters. They really come alive. They really obsess me. I keep on writing about them, and I realized it was no longer a short story, it was becoming a book, and I just followed the characters.” The novel, about two sisters, Lali and Pilar, who love the same man but take completely different actions in the years right after the fall of the Marcos regime. That setting is vital to the tale, Melvin said. “It’s extremely important. There are all these personal relationships between the characters, but all of this is extremely influenced by the kind of political upheaval they’re in.”

Eros S. Atalia’s “Si Etot” won first prize for Short Story in Filipino, which is the best-selling (2009’s “Ligo na Ü, Lapit na Me”) author’s fourth first prize, meaning he only needs one more first prize to make the august Palanca Hall of Fame. “It’s hard to keep challenging yourself because I always want to write something new every time,” Atalia said in Filipino. “I want to keep making people intrigued, to make them angry instead of pleasing them.”

Speaking of the Hall of Fame, the evening’s most applauded winner was Lamberto E. Antonio, who won the first prize for Poetry in Filipino for his collection “Turno Kung Nokturno at iba pang Tiyempo ng Rilyebo sa Pagberso.” Master of ceremonies Dr. José Wendell Capili noted that Antonio co-wrote the screenplay for “Insiang,” the 1976 film directed by Lino Brocka and the first Filipino film to be shown at the Cannes Film Festival. This was his fifth first prize, making him the 26th person to be inducted into the Hall of Fame. One of the most respected and prolific poets in Filipino, Antonio said in Filipino, “It’s not about winning or losing. I don’t write to win. I write to write. The important thing is to keep writing poems in Filipino and that people are reading them.” Antonio, who is also a respected translator, is working on a Filipino translation of Fyodor Dostoyevsky’s “Crime and Punishment.”

The Palanca Awards conferred a posthumous award to Milagros Palanca-Furer, described as “the proponent of the Carlos Palanca Memorial Awards for Literature” and that “truly, without her, we wouldn’t be gathered here tonight.” Given by Palanca Awards director-general Sylvia Palanca-Quirino and Carlos Palanca IV, the posthumous award was accepted by Furer’s daughter Karin Furer-Manalaysay.

Cecilio-Palanca said, “undoubtedly, Filipino writers have been doing their part in contributing to this treasury of global literature. It is to their credit that their literary voices keep adding substantially to this many-splendored trove — by arresting the moments that matter, weaving the extraordinary threads that surprise and delight when revealed to be familiar, and render the unique mythos that define the Filipino.”

“As writers, we must stay the course, particularly in bleak times such as those that confront us now,” Hidalgo reminded. “We will not necessarily agree on what we are called upon to do, but we will do it according to our best lights. We will observe, we will record, we will protest, we will remember and we will endure.”