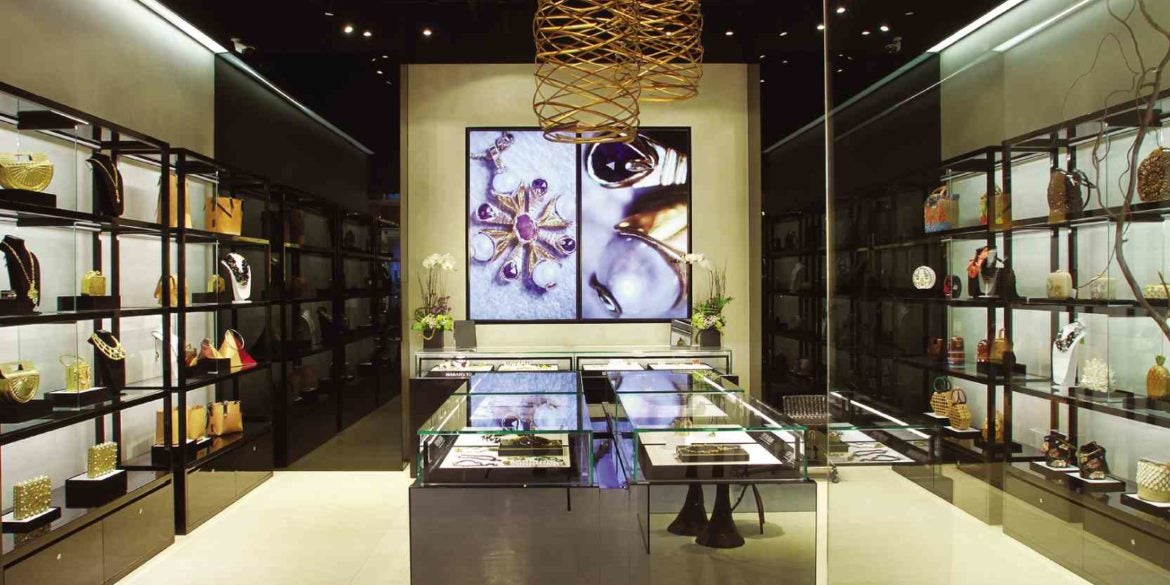 In collaboration with Budji Layug, it’s out to redefine locally made luxury, from the classic, cutting-edge, to the quirky

Marahuyo is a fashion brand created by the Department of Trade and Industry (DTI) and design specialist Budji Layug, meant to redefine Philippine luxury.

It is the high-end spin-off of Go Lokal, a brand that helps Filipino entrepreneurs with micro, small and medium businesses penetrate the mainstream market.

As a luxury brand, Marahuyo (which means “to be enchanted” in Filipino) isn’t just about a quality product sold at premium prices (P6,000 to P35,000).

Assistant Trade Secretary of the Trade and Investments Group Rosvi Gaetos and Layug  selected designers who not only produce original works, but also stand for a purpose and are identified with  heritage, sustainability and providing livelihood.

The launch of the Marahuyo boutique coincided with the formal opening of the Luxe mall of Duty Free Philippines Corp. (DFPC) at the Mall of Asia Complex.

Marahuyo is at the Luxe mall at the Mall of Asia Complex.

The DTI and DFPC forged a partnership to promote Marahuyo to its target markets, travel retail consumers and international market.

Conceptualized by Layug, the Marahuyo boutique is resplendent with fine surfaces such as stone flooring and graphicote walls.

Gaetos explained that the initial selection of designer brands was culled from the participants of Manila Wear, the branding program of the Center for International Trade Exposition and Missions (Citem) that develops unique fashion pieces for the global market.

The brands of Manila Wear were guided by designer Josefina Natori, whose namesake fashion label has been sold in high-end department stores in the United States for the past 40 years.

Layug likened Marahuyo to Movement 8, the group of furniture and home accessory designers formed 20 years ago by Citem to represent Filipino craftsmanship and local materials  in international trade fairs and expos.

Design with an attitude

“The challenge for me is to spot something that has never been done,” Layug said. “It’s the same story with Movement 8. When Rosvi asked me to do Go Lokal Luxe, I found it contradictory.”

Layug felt the need for a new brand that had its own identity, focusing on sophisticated Philippine fashion design.

“We picked those who were ready for the international market. Their outstanding designs had an attitude. Aside from choosing the fashion brands, we had to create an unusual mix,” explained Gaetos.

Gaetos underscored the importance of authenticity and origin. “Some brands that came in were beautiful but were manufactured in China or Italy, despite being a Philippine design. That is a no-no for Marahuyo and Go Lokal, because everything has to be made here.”

Layug spelled out the factors needed for the global market: attention to detail, personality, refined design sensibility and strong branding.

He cited Ann Ong’s fusion of natural materials with precious metals, such as  bamboo with hammered gold in her minaudieres and jewelry, as something novel for the foreign market.

He added that she uses sustainable materials, which adds value to her products.

He is amused by the quirkiness of accessories manufacturer Marie Oamil. “Her eccentricity is reflected in her products.”

Marie and her husband Melecio created Mele + Marie, which started with tiger abalone and carved wooden minaudieres. The cage minaudiere, a wire mesh purse, is a big hit in Paris.

Then there’s Arnel Papa’s luxury jewelry that uses carabao horn, coco beads and shell. “Arnel’s works are bold and tribal. When the world sees the range of products, from fine jewelry to tribal designs, they will be inspired,” Layug said.

Gaetos is proud of theMarahuyo’s designers making a name on the foreign market.

Joyce Makitalo’s amulet-inspired designs are sold in boutiques in Europe. Her pieces have been worn by Liv Tyler and Katy Perry.

Joanique and Aranaz bags,  the latter known for its resort lifestyle look, sell to British retailers and speciality boutiques in Europe and the United States.

Gaetos pointed out that the DTI chose Quiddity, a young leather brand, to offset the  items made of gold and semiprecious stones.

Designer Genevieve Go studied in Florence and sources the vegetable-tanned leather from Italy. Still, the bags are cut and stitched by Filipinos.

“Marahuyo conveys the image of being specialized,” Gaetos said. “You won’t find these designs anywhere. The designers will produce in numbers that they are comfortable with.”

Although Marahuyo is created for the global consumer, Filipino shoppers themselves will have good finds in the store.

Plans are afoot to set up Marahuyo pop-ups in New York and Los Angeles.