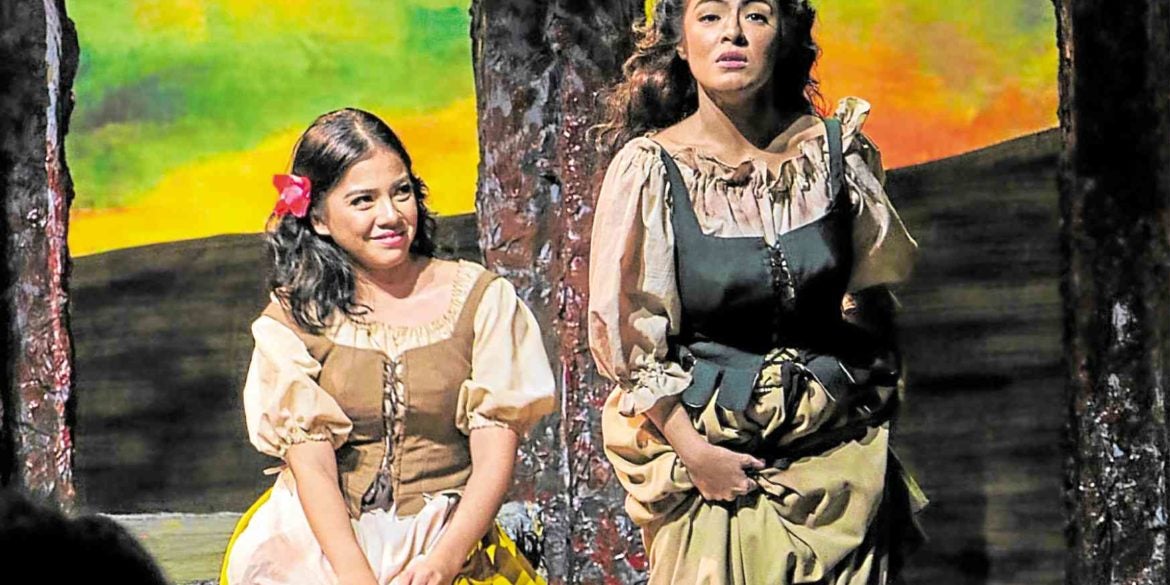 A lot is riding on the shoulders of Dulaang UP production

There’s a lot riding on the shoulders of Dulaang UP’s (DUP) “Fuente Ovejuna.”

Not only is this Spanish play (written by Lope de Vega) celebrating its 400th year of publication, but the production also marks the final time that DUP’s founding artistic director Tony Mabesa sat in the director’s chair.

For those reasons alone, it shouldn’t be surprising if “Fuente Ovejuna” eventually becomes a sentimental favorite within the theater organization. Nothing can take away from that.

However, taken on its own merits, this production of De Vega’s historical play—about a small Castile town rising up against its oppressive Spanish military masters—is mostly tepid and awkwardly staged.

There are qualities of De Vega’s story that definitely resonate even today (and Nicolas Pichay’s Filipino translation amplifies those qualities), but DUP does little to make the material its own. Unfortunately, this is not the kind of theater show that can subsist on history alone.

It isn’t difficult to see why DUP selected “Fuente Ovejuna”: its story of revolution under tyranny is, of course, urgent and timely, and its Spanish roots certainly help bring the titular town closer to our own historical doorstep. But any attempts at allegory are lost with the play’s conclusion, which leaves the townspeople with far less power than they were promised, and sees the Spanish King Ferdinand’s flag still flying high.

Entertaining as some scenes are (the revolution scene itself is fittingly rousing), the play’s ultimate message is mixed and more than a little off-brand for DUP. It never becomes clear what kind of future awaits the town of Fuente Ovejuna.

There is little one can do about a 400-year-old text, of course. But it’s still disappointing how stuck in the past the production feels.

There is very little in Faust Peneyra’s set design or Eric Pineda’s costumes that offers an idea of what kind of setting the titular town is.

Steven Tansiongco’s videos and graphics would have been more effective had they been projected onto a smoother, more spacious surface. Whenever the actors move into place for one of the production’s many, many tableaus, the resulting images just aren’t particularly interesting. For a play all about setting, this version of “Fuente Ovejuna” feels lost and placeless.

To be fair, there are a number of bright spots within the cast that keep “Fuente Ovejuna” grounded for small intervals.

Hariette Damole is playful and bitterly resentful in both English and Filipino versions of the production. And as the jokester Mengo, Ricci Chan and Dolly Dolot—undoubtedly the audience favorites for each version—provide some seriously welcome comic relief through a variety of comedic techniques.

Still, much of the cast seems trapped behind the material given them. These broadly stereotyped characters work a little better in the Filipino version, where the actors are far more comfortable. The English version only accentuates the stiffness of the characters, and makes the entire stage appear more like a bare set than ever. It doesn’t help that the actors have very little to interact with on stage; most of the time they’re reduced to standing unnaturally in one position until the next cue finally comes, pages away.

“Fuente Ovejuna” is a production that provides quick, short bursts of emotion that are sadly far and few between. The tragedy of oppression is there, as are the joy of finding love and the catharsis of finally claiming freedom. But there is little in the production itself that tries to convince us that these emotions are real or meant to last.