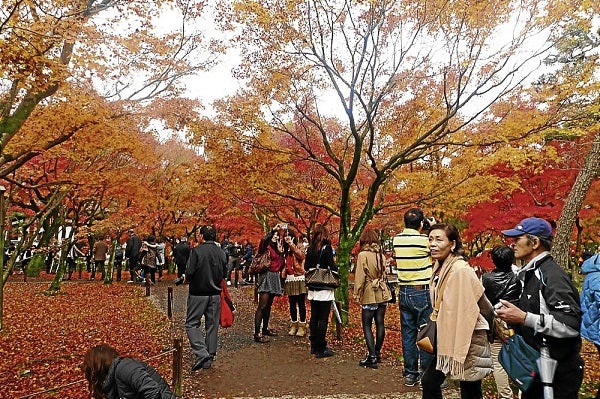 It’s been said that the kouyou phenomenon, or the turning of the autumn leaves in Japan, inspires people to write beautiful poems and prose. It can even make amateur photographers produce photos like pros.

I didn’t believe this at first, as I’d grown up thinking that nothing could ever be as breathtakingly beautiful as the delicate sakura (cherry blossoms) of spring.

After months of preparation (and years of anticipation), I’d finally been able to book a trip to Osaka last March, hopefully to catch a glimpse of the budding pink blooms for the first time. But then the tsunami-earthquake disaster happened just days before my departure.

Although Osaka was largely unscathed, morale was low, and it didn’t feel right to go on my dream trip while everyone around me was living in a nightmare. So, I decided not to go.

For a budget traveler like me, this heartbreak definitely didn’t come cheap. All that money and effort I’d spent in procuring a tourist visa and other requirements went down the drain.

To add insult to injury, I was told my plane ticket didn’t qualify for a refund. Of course, my losses paled in comparison to those of the people of Japan, but because I’d dreamed of this opportunity for so long, I couldn’t help but feel crushed.

As fate would have it, there came another golden opportunity for me to go to Japan before the year ended. Melissa Telan, my friend and would-be host in Osaka, reassured me that autumn was the best time to come visit, having found from experience that the fall scenery was more exciting than the spring blooms. I still had my doubts, and I’d only barely recovered from the financial blow from my botched first attempt. But life rarely hands out second chances, so I took it.

Boy, was I ever glad I did.

Because my funds left little room for commuting to Tokyo, I decided to stay in the Kansai province and make the most of the area.

When I’d arrived in Osaka in late November, the leaves were just about to turn yellow. But in a matter of days, the foliage literally exploded into a sunset of colors, pale gold and fiery orange and blood-red. Melissa wasn’t kidding when she said I wouldn’t be disappointed, because the moment I glimpsed kouyou for the first time, it just took my breath away.

I threw away my carefully planned itinerary and just decided to go wherever my kouyou-induced wanderlust took me.  It brought me to the magnificent landscapes of old-world Kyoto, to the hidden beauty of sacred Mount Koya in Wakayama, to the bustling, brightly-lit city of Kobe, and to the pristine parks of downtown Osaka.

Among the cities I’d visited, Kyoto had the most number of beautiful kouyou-viewing places. I strolled in the tranquil gardens of Maruyama Park in the heart of Gion district, walked through the dense, swirling haze of momiji (maple leaves) at Tofuku-ji Temple, and marveled at the spectacular nighttime view in Kiyomizu-dera.

Temples and shrines were filled to bursting with tourists snapping photos left and right in an effort to capture the fleeting beauty of their surroundings. It was the first autumn view I’d ever seen in my life. But for the Japanese, it was their first after the great disaster.

What they said was right; not only does kouyou inspire the mind, but it also heals the heart and soothes the spirit. Judging from the delighted faces all around me, mine included, it seemed that it did just that.

By the time my 10-day vacation had ended, so had the peak of kouyou. Soon it would be winter, and the once-brilliant foliage would turn brown and be covered in frost. Then it would be sakura season all over again. The thought still sent a twinge of sadness through me, but looking back, I’m perfectly happy with how things had turned out for me.

I might not have been able to see the cherry blossoms, but I had been given the chance to witness something equally wonderful, if not more, in exchange.

I know that it also happens in other four-season countries, and is probably just as beautiful. But to me, this experience is and will always be extra special. To me, autumn in Japan possesses a melancholy kind of beauty that, in the wake of last year’s tragedy, stirred up a whole gamut of feelings—of wonder and appreciation for what’s in front of you, of gratitude for being alive to see it, and of hope for many more moments like this in the future.