Welcoming Oshogatsu—the New Year—in Tokyo: How to do it the Japanese way | Inquirer Lifestyle 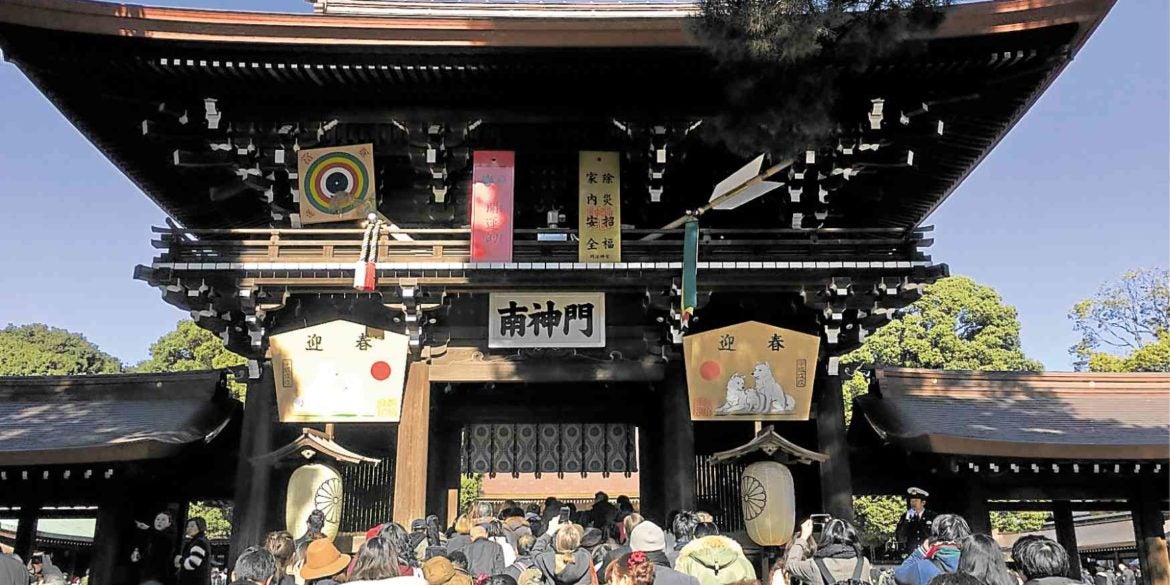 Welcoming Oshogatsu—the New Year—in Tokyo: How to do it the Japanese way

If you’re a history buff, this may be one of the rare opportunities to see the Emperor in the flesh

I was silently berating myself while standing in line with hundreds, maybe even thousands of other people outside Kanda Myojin on a freezing Monday night.

It was New Year’s Eve, or Omisoka as it is called in Japan, and the queue to get into the Shinto shrine had already snaked all the way to the main street.

It was to be expected, though. Kanda Myojin is a popular shrine visited by people seeking success in business, in marriage or in relationships. It’s a must-visit on Omisoka—one of the most important days of the year in Japan.

The other important day, of course, is the New Year itself—known as Oshogatsu.

It was my third New Year in Tokyo. Thanks mostly to students learning English, I’ve learned a bit more about how to celebrate this festive season and usher in the New Year in a Japanese way.

Check out the winter illuminations

The winter illuminations in various parts of Tokyo are highly popular. Just before coming to Kanda Myojin, I went to the Shibuya Ao no Dokutsu, or the Shibuya Blue Cave. A crowd favorite, the winter illumination stretches to about 800 meters from Shibuya Park to Yoyogi Park and is lit by some 600,000 blue LED lights that create a magical atmosphere.

Sure, soba can be eaten all year round, but the thin, long brownish buckwheat noodles become extra symbolic on New Year’s Eve.

Toshikoshi literally means “year passing” and eating soba noodles on New Year’s Eve symbolizes crossing from the current year to the present year. Reminisce about the previous year as you enjoy the piping hot bowl of soba.

The tradition has been around for 800 years and various stories surround it. One story goes that since soba breaks easily, eating toshikoshi soba is a symbol of parting from the unfortunate events of the current year. The long strand similar to our pancit is synonymous to long life. Remember to finish your toshikoshi soba before midnight. Otherwise, you’ll carry over your 2019 problems into the New Year.

Go to a shrine (or a temple) to experience ‘hatsumode’

Hatsumode is the first visit to a shrine or temple for the year. Many people think that the best time to go is from Jan. 1 to 7, though the more traditional people would rather go on the first day of the year.

Some people visit a certain shrine since different deities are enshrined in each shrine.

Yushima Tenmangu near Yushima Station is frequented by students and individuals praying for help with their studies. While you’re at the shrine, you may also want to buy an omamori (lucky charm) or know your fortune for the year by getting an omikuji (fortune telling slip).

Watch the first sunrise or ‘hatsuhinode’

If you’re a morning person, then you may want to do a hatsuhinode, or watch the first sunrise. The first sunrise is extra special for the Japanese. One of Japan’s most important deities is the sun goddess Amaterasu. It was believed that Japan’s emperors trace their lineage to Amaterasu. Watch the sunrise and pray or hope for a great new year.

Make the trip to Miura Beach in Kanagawa prefecture. The beach is accessible from the Keikyu Kurihama Line from Miurakaigan Station and the first train usually arrives before sunrise.

On Jan. 2, the gates of the Imperial Palace are opened to the public for the New Year greeting. The Emperor delivers a short message. Joining him are the Empress and other members of the imperial family, who make about five appearances to greet visitors.

The first appearance is usually around 10 a.m., and people start queuing as early as 6 a.m.—yes, that’s not a typo.

The first time I did it, I had to wait for three hours. If you plan to attend, bring a book or something to keep you busy.

Get your hands on a ‘fukubukuro,’ or lucky bag

Many shops sell a fukubukuro or “lucky bag” starting noon of Jan. 1. A combination of the Japanese words fuku (meaning “good fortune”) and fukuro (“bag”), the tradition of selling fukubukuro dates back to the early 1900s.

The only catch is, you have no idea what’s inside the bag. If you’re shopping with friends, you can have a swap meet after you’re done shopping. Spend your money wisely. Ask yourself if you really need that other fukubukuro just because it’s ¥5,000.

So, there you have it, these are but a few ways you can welcome 2020 in Japan.

One more thing: It might be helpful to know that there are two common greetings during this season. Before Jan. 1, people say “Yoi otoshi wo,” which loosely translates to “Please have a good (new) year.”

From Jan. 1, people say “Akemashite omedetou gozaimasu” (Happy New Year). You can also add “Kotoshi mo yoroshiku onegaishimasu” (Thank you for all your support for this year in advance).