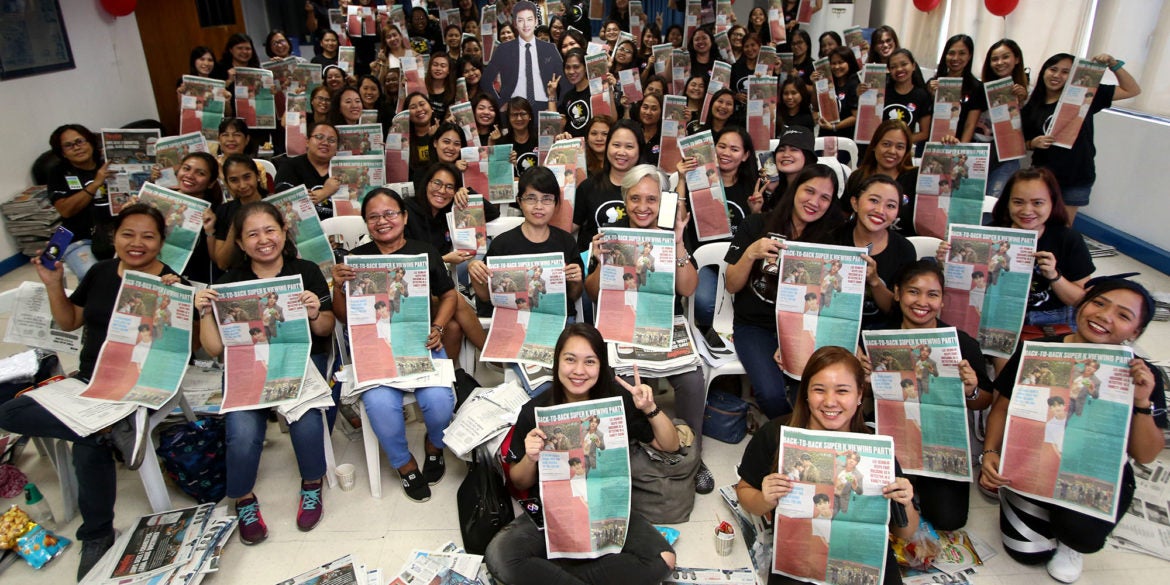 The scent of ink hits as you enter the multi-purpose room of the Inquirer Building last Sunday. Three thousand copies of the day’s issue of the Inquirer were strewn on the floor. Members of Ji Chang-wook Philippines (JCWPH) were busy cutting and filling out ballots for the first Super K awards.

“We’ve always been competitive when it comes to anything related to Wookie (Ji’s nickname). We would be first the in line when it comes to supporting him. JCWPH trusts Super K and they come out with reliable content on him. They also appreciate the hard work of fans and fans club. Super K loves us and we love them, too,” said administrator of JCWPH page Anne dela Cruz.

Casting their votes kept the members of the fan club busy but the event was really about gathering them to watch the final two episodes of Ji’s first drama after his military discharge. “Melting Me Softly” is about two people who woke up 20 years after they participated in a cryogenic experiment. The drama ended one week before, but some of the members waited to watch it with their fellow fans in the first Super K Viewing Party.

“Besides showing support for Wookie, this is also a chance to for local fans, both old and new, to bond. The members view it as a stress reliever. We enjoy being together to experience kilig for him,” said dela Cruz.

Ji starred in several Korean dramas such as “The K2,” “Healer” and “Empress Ki.” He enlisted in the military in August 2017, with romantic comedy series “Suspicious Partner” being his farewell project then.

The Super K Viewing Party is a celebration of the sub-section’s first anniversary and the Inquirer’s 34th. On Nov. 24, fans arrived at the Inquirer main office in their black shirts and Ji merchandise and huge smiles on their faces, many of them traveling hours just to be there.

“I became a fan of Ji Chang-wook because he acts well and he makes us (his fans) feel that we are important. The fact that he is handsome is only a bonus,” said Michelle Guzman, a proud fan.

For Guzman, who came from Bataan province and traveled three hours for the viewing event, fan gatherings strengthen club members’ relationships. They also see to it that they help out other people. The fan club recently donated money and brought food for the cancer patients in PGH Nurses’ Home in Malate. They also performed for the patients, including a dance number from Neljean Saballero, Roseanne Nacional, Francialyn Nelpa collectively known as Chang-wook’s angels. Members Christine Eugenio and Cherry Sande also performed songs.

The same performers shared their talents during the Super K Viewing Party.

Helping out those in need is something their idol has done himself. This year, the Korean star graced the covers of The Big Issue Korea and Japan, magazines that gave half of their sales profit directly to homeless people.

“We need to be a fan with a heart. (We) continue loving Ji Chang-wook and other fandoms but most importantly, allow our organization to help others,” Guzman said.