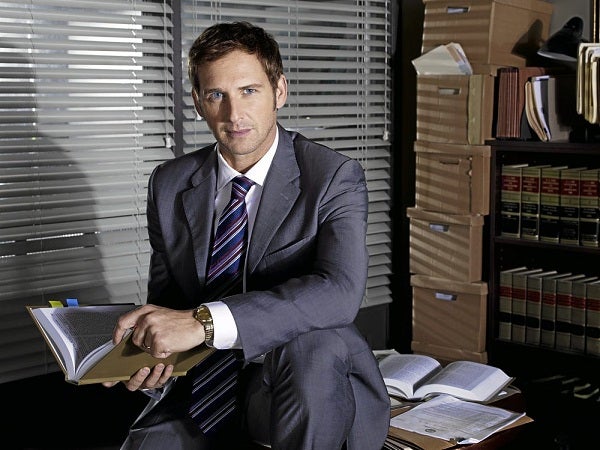 We grew up waiting for the latest Grisham novel, and the inevitable film that would follow.  John Grisham fans are rejoicing at the return of the first novel to film lawyer, Mitch McDeere, as he makes a comeback ten years after taking down the Mafia, but on TV this time.

Super gets the skinny on reviving Mitch McDeere from star Josh Lucas, who was chosen by John Grisham to be the TV reincarnation of McDeere, and he opens up about running, working in a blizzard, freezing for his dogs, and why you will be glued to The Firm.

I was actually doing a movie with Nicolas Cage (Stolen) down in New Orleans and I just got the script and they said they had offered it to me based on conversations that the creator had had with John Grisham. John had liked certain things that he had seen from a number of movies that I had done that made it seem like I would be a good fit for Mitch McDeere, so from the very beginning it was an honor to be kind of chosen by John Grisham to play that character in particular ’cause I knew Mitch McDeere was one of the most important characters that Grisham felt he had created.

How did you prepare to become Mitch McDeere?  You mentioned having seen the film and reading the book, anything else you did?

It’s kind of a funny side story, but the movie I was doing with Nicolas Cage, I played a very broken person—he was actually missing a leg, and because of that he had built up his entire upper body and he was physically huge, I was like a bodybuilder. When the writer of the show came to New Orleans to meet with me, to talk about whether I was going to do the show or not, he was very concerned that I looked like a bodybuilder and not like a lawyer, so one of the things I actually had to do was to get down to what I normally look like, and I kinda had to prepare physically that way. A lot of it was trying to understand the mind of a lawyer. There was one particular book that was tremendously helpful which is by a great writer called Scott Turow, who also wrote “Presumed Innocent”, which became a Harrison Ford movie.  Scott had gone to Harvard law school like my character Mitch McDeere, and he wrote about that experience, and it was called “One L,” which is a book that a lot of people who want to become lawyers read, and that was the primary influence that helped me understand the character from that way as well. A lot of it was just studying the book and the original movie which were the two main influences I had as well.

Since you’re really immersed in legalese, have you found yourself absorbing legal knowledge and consequently giving legal advice to friends?

(Laughs) Absolutely not! If anything, it’s made me more skeptical of the law in some ways because this show is written mostly by lawyers and they write a lot about the twists and turns of how the law can be manipulated and that’s a really scary thing to see.

What type of viewer do you think would enjoy your show the most?

I think it’s interesting, it’s very much a family show but it is a John Grisham thriller, and it is a legal thriller. I think people who like legal thrillers, really.  It’s people who appreciate watching the nuances of the American legal system, because a lot of the show is about that, and people who love John Grisham’s work, the page-turner thriller aspect of it.

You mentioned on Jay Leno that you have been running like crazy.  How many takes does it get you to perfect a running scene?

One of the things they made me do in the beginning of the series was running a lot, and they had to determine how much I can run in one day and they were like, “Okay, Josh can’t run twelve hours,” then “Josh can’t run ten hours a day,” “Josh can only run eight hours a day.”  It really became like that, they had to schedule it so I would be running in the morning, then not running for a couple of hours, then running again, then not running again, honestly, I just almost collapsed from running too much (laughs). So we did a lot of takes, just like an action film where you do it over and over, but with television it’s much faster than a movie so you don’t do it as many days in a row, that’s for sure. It’s usually just one hard day of running a week. I don’t have to work out anymore, though, my job is working out.

Have you had any funny moments during shooting?

The lucky experience we’ve had during the show is that I love the cast, we have a really great camaraderie and friendship, and because we’ve had to spend so much time together, one of the funniest things on set that I can’t tell you about over the phone is Callum, who plays my brother, has a very filthy mouth, to say the least.  He loves to swear and just swear at the top of his voice kind of screaming over and over, but he does it for fun and he has the whole crew rolling in laughter when he does it, which is when he makes a mistake, and he likes to make mistakes so it happens a lot.

You’ve been filming mostly in Toronto and Washington.  Was it hard uprooting yourself temporarily from New York?

It is hard. One of the very complex things about doing a TV series that’s different from a movie is where you go. In a movie you go somewhere for three or five weeks, not particularly long, but a television series is a complete change of lifestyle. We’re shooting here for eleven months now, it’s a huge commitment, basically a complete life change. One of the challenges here was that yesterday, it was eighteen degrees below zero, and we were filming outside in the snow, it was incredibly cold, and we were basically working in a blizzard.  I’m used to that weather in New York, but I’m not used to working outside so it’s a challenge for all of us, the crew in particular.  So yeah, it is a big change but I work so much that I haven’t gotten to know Toronto as much as I would like and New York is fairly close by so any chance I get I go home for the weekend, so it’s been OK.

How do you relax there when you’re not busy filming?

I have two great dogs that are with me and there are a bunch of dog parks and my most favorite thing to do is take these two to the park, even in the winter.  One of them is a Siberian Husky, and watching her in the snow is just marvelous.  I spent a lot of time freezing in the park watching my dogs have the time of their lives, it’s one of the fun things we’ve been doing.

We love that you love your dogs!

Yeah, they’re a lot of fun!  I have a movie, I think coming out in the Philippines, about a dog that I love as well.  It won an award in Australia for Best Film called “Red Dog”, so keep a look out for that, it’s a really wonderful film.

The Firm premieres first and exclusively on AXN on February 19, Sunday and airs every Sunday at 9.55 pm.