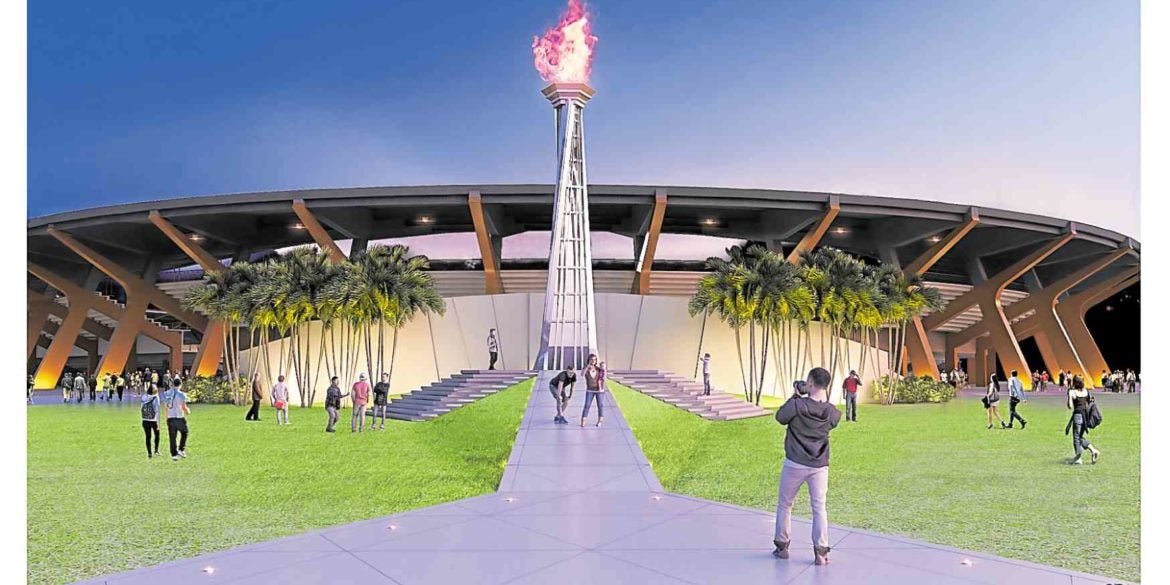 Although he could no longer wield a pencil, the National Artist for Architecture was able to comment on the plans, suggest change and give final approval

The controversial cauldron—now known as the “kaldero”—for the 2019 Southeast Asian Games seems to have bubbled nothing but toil and trouble for its proponents.

But seeing it light up at the opening of the games would have brought a big smile to the face of its designer, the late National Artist for Architecture Francisco “Bobby” Mañosa, say his children.

Critics have questioned the cauldron’s P55-million construction cost, branding it an “Imeldific” indulgence.

Others have pointed out that it seems to be a mere reiteration of Mañosa’s 1996 design for the Centennial Tower, a project which never saw the light of day.

Architect Angelo Mañosa, who has inherited his father’s mantle as chief designer and CEO of Mañosa &amp; Co. Inc. (MCI), the family architectural firm, stands by their cauldron.

“This is 100-percent Dad’s design,” he says. “I can’t take any credit for it. Even the inspiration was his. We were just the instruments for developing and adapting it to the site.”

The 88-year-old architect was already in frail health and in the early stages of dementia when the firm was contacted by the Philippine Southeast Asian Games Organizing Committee (Phisgoc) in January this year to design the cauldron.

This was just weeks before his death from pneumonia on Feb. 20.

In his last months, his father had good days and bad days, says Angelo. On his good days, he was lucid for a few hours a day, specially when it came to matters of architecture and design.

“Every now and then, I would give him an executive report on the projects the office was working on, and the [SEA Games] cauldron was the one he was most excited about,” recalls Angelo.

That was when he directed them to look up his original design for the Centennial Tower, which was inspired by the sulô, the traditional Filipino torch. It was this design that the firm adapted for the SEA Games cauldron.

Although he could no longer wield a pencil, the elder Mañosa was able to comment on the plans, suggest changes and give the final approval to the design.

The central design element, the three-pillar tower with a half-twist in the middle, was meant to suggest a tripod made of three bamboo poles lashed together in the middle, supporting a cauldron of fire on top.

The firm made two other cauldron designs, but the one with the half-twist was what the National Artist preferred. It was also the one chosen by the Phisgoc selection committee, although Angelo says he didn’t tell them which one was his father’s choice.

According to Bambi Mañosa, when her father was told that the cauldron would be built, he smiled and gave the “thumbs up” sign.

Designed by Mañosa for a German firm that was pitching the project to the National Centennial Commission during the administration of then President Fidel Ramos, the Centennial Tower was supposed to commemorate the 100th anniversary of the Philippine republic. It was designed to be a landmark, like the Eiffel Tower in Paris or the Petronas Tower in Kuala Lumpur.

The plan to build it in Rizal Park drew widespread criticisms and protests from heritage conservationists, however, and the proposal was eventually scrapped in favor of the Centennial Park in Clark, Pampanga.

Inspired, not a copy

“Is the cauldron a copy [of the Centennial Tower]?” says Angelo. “No. It was inspired by the original design, but there were some tweaks that Dad did.”

He adds that contrary to insinuations on social media, the firm never received payment for the Centennial Tower design.

Apart from the cauldron itself, he adds, the firm also designed the entire site, the podium on which the cauldron rests, and the backdrop which conceals the stadium’s utilities building from the view corridor.

The design elements were intended to symbolize the country: the three main pillars for Luzon, Visayas and Mindanao, 17 sub-pillars for the 17 regions of the country, 11 segments in the tower and 11 steps on the podium for the 11 countries participating in the games.

“The Centennial Tower was supposed to rise 384 meters,” he says. “It would be the third tallest tower in the world at that time. We initially looked at a 32-meter cauldron, so that the flame would be visible from inside the arena, but the budget would not allow for such a tall structure, so we ended up with the current height of 12.5 meters. We also had to make a site development plan around the cauldron and raise it up on a podium.”

They charged Phisgoc only their design fee of P4.4 million, he adds, according to the professional standards of the United Architects of the Philippines, which recommends that architects base their fees on 10 percent of the estimated project cost—between P40 and P50 million at the time.

Further muddling the issue is the lawsuit being faced by the family’s real estate development venture, Mañosa Properties Inc. (MPI). Angelo says that this is a totally different issue that has nothing to do with the cauldron, or the architectural firm which is an entirely independent company. Media reports and social media comments, however, have conflated the two in the popular perception.

Bobby Mañosa was no stranger to controversy himself.

His grand architectural statement, the Tahanang Pilipino or Coconut Palace, which was commissioned by then First Lady Imelda Marcos, was also the target of critics.

At the time many people believed it was expressly built to house Pope John Paul II when he visited the Philippines to canonize St. Lorenzo Ruiz in 1981. Actually, John Paul had not yet been elected pope when Mañosa was commissioned to build it in 1978. The Tahanang Pilipino was meant to be a guest residence for visiting artists performing at the Cultural Center of the Philippines.

The architect again figured in a controversy in 2009 when then President Gloria Macapagal-Arroyo decided to add him, with Jose “Pitoy” Moreno, Cecile Guidote-Alvarez and Carlo Caparas, to the list of candidates for National Artist.

The move was greeted with howls of protest from the cultural community, leading the Supreme Court to revoke the award.

Mañosa was eventually named National Artist for Architecture, for real, in 2018.

“We’re a family of artists; we’re not built for that kind of thing,” says Angelo Mañosa about the controversies besetting the family.

“We’ll take the hit, but I know the truth, so I sleep well at night.”

Editor’s note: The writer is the author of “Designing Filipino: The Architecture of Francisco T. Mañosa” (2003) and “Beyond the Bahay Kubo: 16 Climate-Conscious Tropical Homes by Mañosa” (2012).