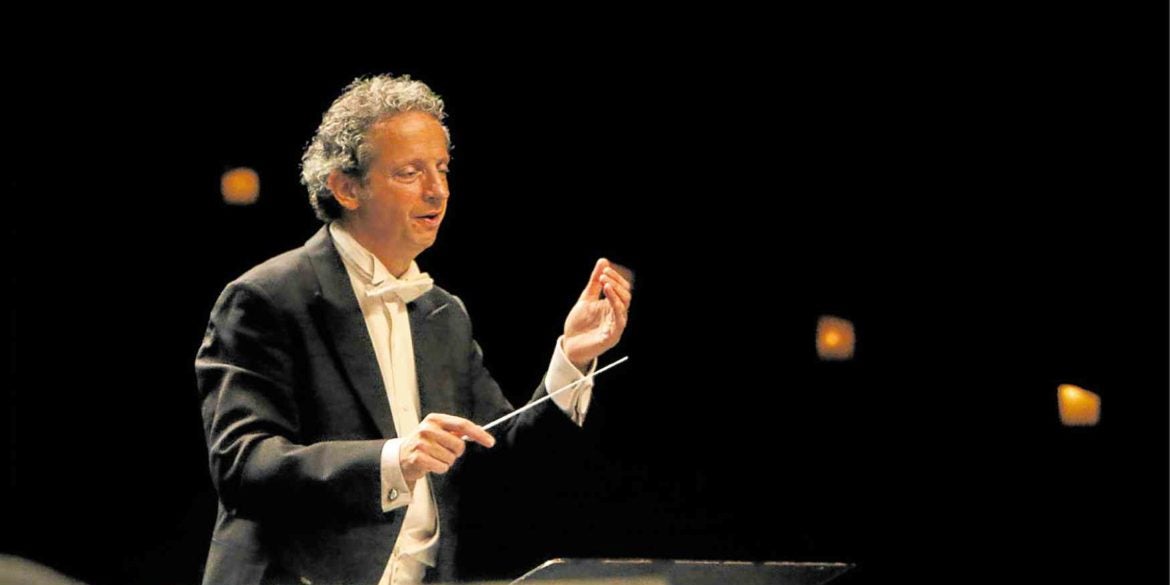 For the second concert of its 37th season, the Philippine Philharmonic Orchestra (PPO) paid tribute to French composer Hector Berlioz (1803-1869).

With the support of the French Embassy, French conductor Michaël Cousteau led the PPO as guest conductor (for the third time) in a program that featured mainly Berlioz’s compositions along with works of his contemporary composers whose works bear his influence, such as Richard Wagner and Franz Liszt.

At the outset, the audience got a taste of Berlioz’s musical genius when Korean baritone Park Byeong In sang the composer’s arrangement of La Marseillaise, the French National Anthem. This followed after his wife, soprano Rachelle Gerodias, sang the Philippine National Anthem. In both anthems, Cousteau conducted the PPO.

French Ambassador Nicolas Galey informed the audience of the composer’s 150th death anniversary this year as “an important milestone” that is observed worldwide. Berlioz is regarded as “an inventor of the modern orchestra,” the envoy said, and his works have enriched the repertory of the Romantic period.

At once, the PPO tackled Wagner’s Prelude to Tristan und Isolde that sought inspiration from Berlioz’s Romeo and Juliet. Maestro Cousteau led the PPO brilliantly etched the rich chromatic colors of the piece that sounded like an endless grief and lamentation.

Main fare was Berlioz’s celebrated “Harold in Italy.” Regarded neither as a concerto nor a symphony, “Harold in Italy” is an orchestral program piece scored in four movements with an outstanding solo part for the viola. Rey Casey Concepcion, PPO assistant principal of the Viola section, was the featured soloist.

This solo viola part is not scored in a virtuoso manner but as an obbligato—that is, it stands out but not as prominent as in the concerto. It thus becomes an integral part of the entire symphonic work.

It is for this reason that Niccolo Paganini who requested Berlioz to compose the piece for him to play did not like it. He expected a concerto that would showcase his famed virtuosity, which he wanted to display on his newly acquired Stradivarius viola! But when he finally heard it much later performed at the Paris Conservatoire, Paganini went up the stage and knelt before Berlioz, declaring him heir to Beethoven!

Instead of virtuoso passages, Berlioz wrote poetic lines for the viola that are poignantly unraveled in the entire four-movement work.

Concepcion came in much later, a few bars before his solo part commenced in the first movement, “In the Mountains.” Here, Casey let his viola sang warmly in utter legate manner the somber theme that tugged the listeners’ hearts. This theme served as a fixed thematic motif or idea (Idee fixe) that would pervade in all the other movements.

The soloist coming out to the stage some bars before playing his part was a novel manner of staging the performance. It did away with the usual way of letting the soloist stand (or sit) while waiting for his part to be played. In addition, the harpist was placed too at the end of the first violin row for effective tonal balance instead of its usual place beside the second violin section.

In the second movement, “Procession of the Pilgrims,” the harp audibly imitated the bells. Here, Concepcion played his solo: a flowing melody patterned after the theme of the first movement. Later on, he played some arpeggiated passages with the bow kept near the bridge to keep that effect of chanting a prayer.

In the next movement, “Serenade,” the English horn was heard intoning the theme of the slow first movement that the solo viola echoed later on.

In the last movement, “Orgie des brigands,” Concepcion played his final solo part on the left side of the orchestra adjacent to the percussion section for effective tonal effect.

Here, the PPO sounded brilliantly in the tutti part. Cousteau had a solid grasp of the baton that spelled mighty command. He easily established rapport with the soloist and the orchestra’s musicians and together brought out the work’s alluring charm in brilliant hues.

In the end, the audience, fully gratified, burst into a hearty applause. Concepcion acknowledged some curtain calls and announced the title of his encore, Henri Vieuxtemps’ Capriccio for Viola Solo, Op. post., No. 9, and played it with flourish!

Back on the podium, Maestro Cousteau led the PPO to surge through another Berlioz work, the “Love Scene” from “Romeo and Juliet,” another programmatic work. It was followed by Franz Liszt “Les Preludes,” a work that bears Berlioz’s conceptual influence that capped the night of glorious listening!