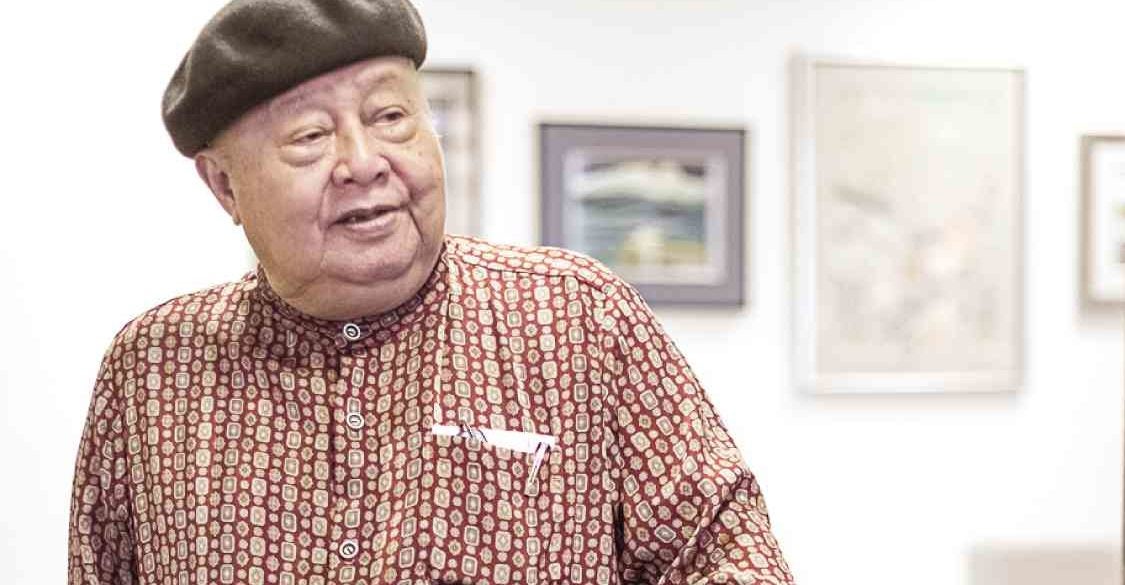 F. Sionil José at his famous bookstore Solidaridad in Ermita, Manila: “His books,” writes James Fallos in the Atlantic Monthly, “take us to the heart of the Filipino mind and soul.”

OMG. The old warhorse is turning 95. Matanda man may asim pa rin (he still has it), to resort to slightly risqué Tagalog slang. National Artist F. Sionil José, frequently nominated for the Nobel Prize, turns 95 on Dec. 3 and the Cultural Center of the Philippine (CCP) will honor him, as it did last year, with a party and program in the main lobby just outside Tanghalang Nicanor Abelardo, starting at 6 p.m.

When he turned 90, José, perhaps the Philippines’ most honored novelist (next to Rizal, of course) decided to make up with the fellow writers he had quarreled with due to political differences. So he wrote in this newspaper a glowing review of the books of my aunt Carmen Guerrero Nakpil. In reply, my aunt Chitang sent him an expensive ball pen, which José always uses with pride. He also condoled with the family of my aunt when she passed away last year.

Then there’s the poet Virgilio “Rio Alma” Almario. One fine day I saw him, to my pleasant surprise, at José’s iconic bookshop Solidaridad in Padre Faura, Manila. “Ano’ng ginagawa mo dito,” I asked him. It was during a fellowship meeting of Philippine PEN (Poets, Essayists and Novelists).

“Inimbita ako ni Frankie, eh,” he replied nonchalantly. Last year Almario reciprocated by inviting José (and other fellow National Artists) to his book launch at University of the Philippines Diliman.

Today José can look back on a wealth of accomplishments (and an age) not given to many. He was a medic during the war with Japan, a skill he has not forgotten. Once, recently, he took my blood sugar, normally borderline but he found it high. I was concerned and then his wife Tessie Jovellanos (a fellow Ermitense) observed: “Well, what do you expect, you and Frankie just ate a lot fried rice at the nearby Chinese restaurant!”

José, Manong Frankie to younger writers, is an Ilocano born and raised in Rosales, Pangasinan, the setting of many of his novels. His forefathers, fleeing poverty, migrated from the Ilocos bringing with them uprooted molave posts from their old house and their alsong, a stone mortar for pounding rice.

The story is that when Francisco (that’s the F.) was 5, his grandfather, who fought in the revolution against Spain, told him about land that the family once possessed but which was taken away from them by the rich mestizo landowners. This scene and these characters occur frequently in the novels of José, with their dispossessed peasantry, rapacious elite, rebels, slum dwellers, ferment in the countryside, and decadence and squalor in the city.

From the start, young Francisco was a voracious reader and his mother would bring the child books to cultivate his mind. Later literary influences were Willa Cather (“My Antonia”), William Faulkner, John Steinbeck and Rizal’s “Noli” and “Fili” (the chapter on the unfortunate acolytes Crispin and Basilio made him cry.)

After the war, José studied at the University of Santo Tomas (UST) where his contemporaries included Inquirer founder Eugenia Duran Apostol. He later focused on journalism and the writing of fiction—short stories, novellas and novels—which would make him famous and translated into many language.

José has written short story masterpieces, notably “The God Stealer” and “Waywaya,” and the novellas in “Three Filipino Women.” But his fame rests on his novels—13 of them, published from 1962 to 2011—particularly the five-novel Rosales Saga: “Po-on,” “Tree,” “My Brother, My Executioner,” “The Pretenders” and “Mass.”

The five novels were not published in the right sequence. For example, the saga begins with “Po-on” but it was the last to be published (1984). But the five novels encapsulate Philippine history from the late 19th century to the late 20th century, encompassing four generations of Samsons and One Hundred Years of Philippine Solitude.

In “Po-on,” we are introduced to the first Samson, named Eustaquio (Itak) Salvador, who is taken in as a sacristan by a kindly Spanish priest, but who changes his name to Samson because he is persecuted by the Spanish authorities. He meets his end in the Battle of Tirad Pass, impressing one American officer with his bravery.

And so the next generations of Samsons travel through the rest of the epic, restless, lusty, journeying from poverty-stricken sitios to Manila’s high society, brother against brother, rebel against Establishment figure. At the end (“Mass”), the last Samson, Pepe, the illegitimate son of Don Antonio Samson, joins the underground, fed up with injustice.

In 1957, José founded the Philippine Center of International PEN.

Last October, when PEN Philippines hosted the 85th PEN International Congress, the first time the annual world meeting of the preeminent writers group was being held in Southeast Asia, José was elected international vice president along with Nobel laureates Svetlana Alexievich of Belarus and Orhan Pamuk of Turkey, Elena Poniatowtowska of Mexico and Luisa Valenzuela of Argentina.

Writing in the prestigious Atlantic Monthly, critic James Fallows said: “The reader of his well-crafted stories will learn more about the Philippines, its people and its concerns than from any journalistic account or from a holiday trip there. José’s books take us to the heart of the Filipino mind and soul, to the strengths and weaknesses of its men, women and culture.”