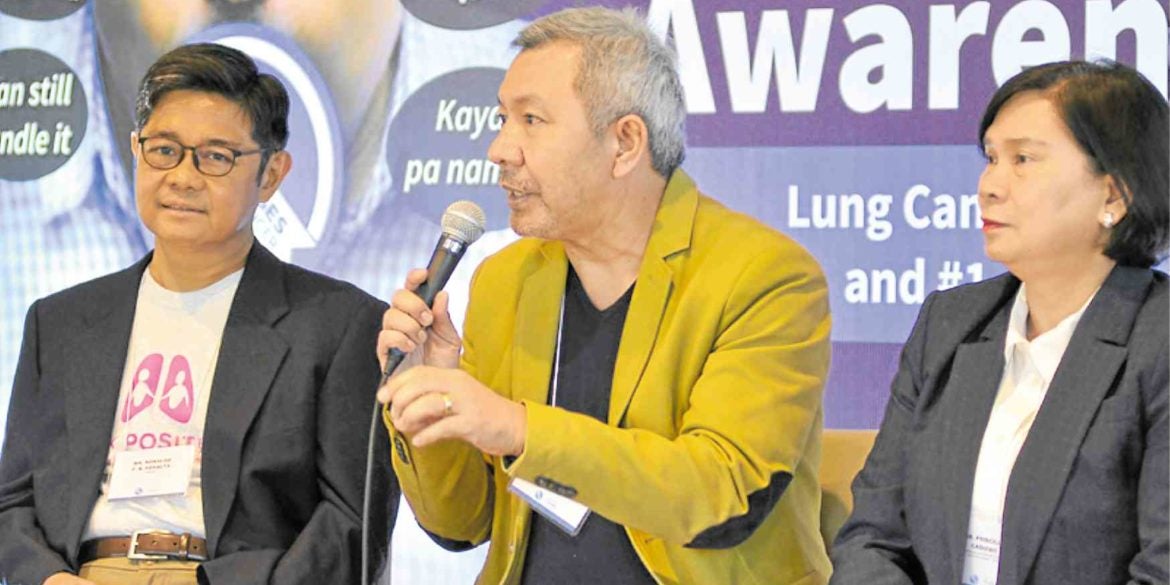 Smoking causes lung cancer, but so does eating grilled meats

Carcinogens form when fat burns over an open flame, or when high heat creates a chemical reaction

Lung cancer is the second most common cancer in the Philippines, just behind breast cancer.

But the latest global data shows that while breast cancer is the leading cause of cancer in the country, lung cancer still claims more lives each year. This was revealed during the Philippine observance of Lung Cancer Awareness Month.

Part of the problem is the nonmanifestation of symptoms during the early stages, such that most Filipinos are diagnosed when lung cancer is at a late and incurable stage. And when symptoms do show up, they sometimes seem ambiguous, like an innocuous cough. Anyone can start coughing at any moment, so why worry?

Ronaldo FB Peralta, a lung cancer survivor, hasn’t touched a cigarette in 30 years. The only time he smoked cigarettes was in college, and even then, the habit lasted only a year. So imagine his surprise when he was diagnosed with lung cancer.

His voice had become hoarse, he said. He had no cough or cold, which was strange. He began to worry when two weeks passed and his voice remained scratchy. Peralta said genetic mutation might have triggered his cancer.

Lung cancer is not always caused by smoking.

Inhaling diesel fumes, family history, exposure to secondhand smoke and asbestos and other carcinogens, and radon gas can cause it as well. (Radon is an odorless, colorless, tasteless and naturally occurring radioactive gas that may be found indoors, such as schools, homes and workplaces. The US National Center for Biotechnology Information lists radon as the second leading cause of lung cancer.)

Carcinogen exposure also includes the consumption of grilled food. Grilled pork, beef, fish and poultry can form chemicals that may cause cancer.

Carcinogens form when fat burns over an open flame or when high heat creates a chemical reaction in the cooking meat. So, yes, you are serving cancer-causing food off the grill.

“Filipinos are very fond of meat barbecues, whether from the neighborhood vendor or in a restaurant,” said Philippine General Hospital’s Dr. Jorge Ignacio, an oncologist.

Nonsmokers can reduce the risk of lung cancer by cutting down on their consumption of grilled food.

Still, smoking remains the leading cause of lung cancer. A cigarette stick contains 7,000 chemicals, and at least 70 can cause cancer, said Dr. Anna Marie Pascual-Panganiban, an oncologist at St. Luke’s Medical Center BGC and Quezon City.

The more “pack years” one has, the higher the risk for developing lung cancer, Panganiban said.

Quitting smoking—today— is essential to reduce the risk of lung cancer.

Panganiban said that within 20 minutes of stopping smoking, the blood pressure and pulse rate drops to normal.

After eight hours, the level of carbon monoxide in the blood drops to normal, and the oxygen level increases to normal. In 24 hours, the risk of sudden heart attack decreases.

She urges anyone with risk factors to get screened as soon as possible. The screening will look for cancer even before a person develops symptoms. “The goal is to find the disease early, when treatment may work better,” Panganiban said.

The only approved screening is a low-dose CT scan. Compared to chest X-ray, a CT scan can detect cancer earlier and can save more lives, she said.

Anyone age 55-77, with 30 or more pack years, current smokers or those who quit smoking after less than 15 years must get screened. Those who are 50 or older with 20 pack years and additional risk factors must also get tested.

“Cigarette smoking is a legal addiction. We treat it like a bad habit, but it is an addiction. We can solve this problem if we begin to identify smoking as an addiction,” said incoming Philippine Society of Medical Oncology president Dr. Buenaventura Ramos Jr., noting that young people remain unfazed by graphic photos of the effects of smoking printed on every cigarette pack.

Ramos also suggested the government consider the recommendation of the United Nations to raise to 21 years old the minimum age for smokers. The Philippine government allows anyone 18 and above to purchase tobacco products.