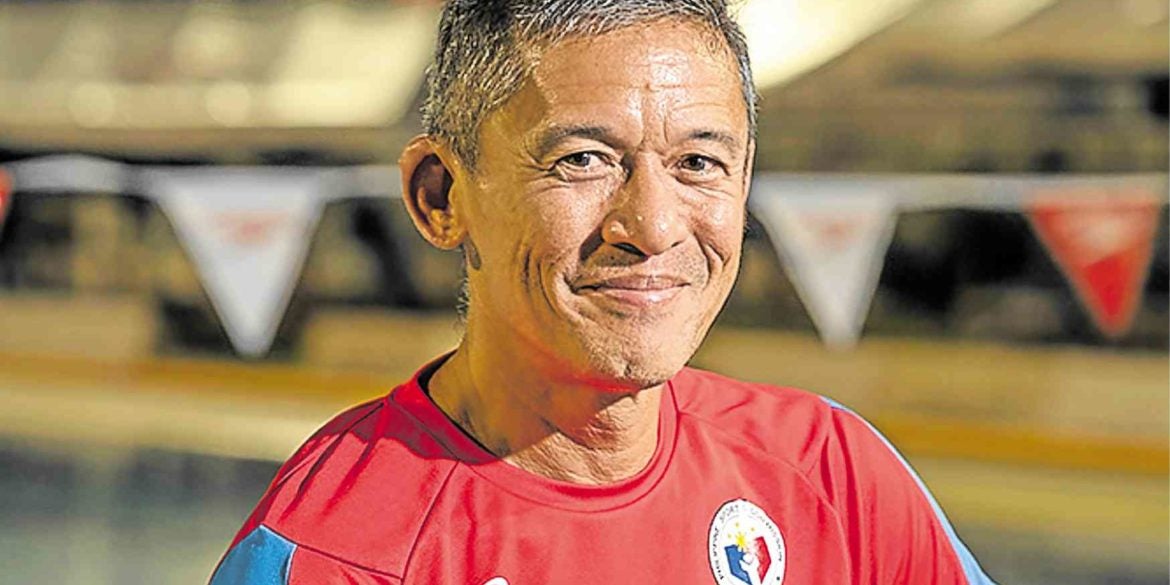 Dennis Valdes: I’m getting far more than whatever I’ve put in. —RG MEDESTOMAS FOR MULTISPORT.PH

Dennis Valdes strikes a balancing act between being a corporate guy and a sportsman/sports manager. It’s his love for underwater sports that’s keeping him fit at 58 and happy.

As president and executive director of PhilWeb Corp., he’s had to put the gaming technology provider back in the black after a downturn. His corporate experience helped him organize the Philippine underwater hockey team in joining international championships.

As president of the Philippine Underwater Hockey Federation, the sport’s national governing body, he lobbied for it to be included in the Southeast Asian (SEA) Games 2019.

He has also had the tough job of competition manager, running the underwater hockey events at the highest international standards.

He believes that the Philippines will make a clean sweep as it competes with Singapore, Indonesia and Malaysia. The underwater hockey finals will be held Dec. 3 and 5 at the Ayala Vermosa Sports Hub in Imus, Cavite.

Valdes was a scuba diver in the early 1980s when he learned underwater hockey. The players, equipped with snorkels and fins, shove a lead puck into the opponent’s goal, which is a tray at the end of the pool.

Asked if the player needs to hold one’s breath under the pool for a long time, Valdes said it takes 15 seconds to dive to the bottom of the pool, get the puck, dribble it, block an opponent, pass it to a teammate and resurface for air. The real aptitude of the sport is knowing when to dive.

When he, his brother David and his friends became more serious, they played at the University of the Philippines and formed a company, Philippine Underwater Hockey Confederation (PUHC).

The sport took a backseat when Valdes left for business school in the mid-’80s, worked in Hong Kong, returned to the Philippines to marry Tessa Prieto in 1994 and joined the corporate world.

In 2000, his former underwater hockey mates invited him to join them.

Valdes was out of shape then. Before he returned to the sport, he swam every day for six months to lose weight and build endurance.

For a decade, he considered himself a social player. In 2011, his colleagues challenged themselves by joining the Underwater World Hockey Championship 2013 in Hungary.

The transition from a hobby to a nationally recognized sport entailed a lot of work. He was asked to become president of PUHC, to professionalize the organization and coordinate with such government agencies as the Philippine Sports Commission (PSC) and the Philippine Olympic Committee.

The administrative work seemed easy, given his corporate background. The tough part was the training. The skinny Valdes had to build his upper body muscles.

The Philippines joined the men’s masters and the women’s elite and placed 11 out of 12 countries in Hungary.

The team’s biggest challenge was to beat Argentina to avoid being at the bottom of the competition.

He enjoys underwater hockey because it calms the mind. The sport requires concentration and intuition. “You have to communicate with your teammates nonverbally,” he said.

“There are days when a team doesn’t seem strong. If they ‘jelled underwater,’ they will beat the stronger team because they’re mentally in sync.”

When the Philippines joined the 19th CMAS Underwater World Championship 2016 in South Africa, it was at the bottom of both the women elite and men master.

The Philippines has won in Asian championships seven times, but competing with Westerners is tough. “The members of the Netherlands team are 2 meters tall. The Australians are all beefed up and their training is scientific,” he said.

Two years ago, Valdes retired from international competitions, although he still plays in local tilts. Underwater hockey is beneficial even at a mature age because it’s a low-impact sport. The buoyancy of the water restrains the force of gravity, thus putting little strain on the joints.

Earlier, Valdes lobbied for underwater hockey to be included in the SEA Games. Out of seven Asian championships, the women brought home five golds, while the men won four.

Then again, the Philippine SEA Games Organizing Committee mandated that every sport needed a competition manager. Valdes took on the job.

“You can’t play for Team Philippines, because you have to be neutral,” he said.

That meant he didn’t get a track suit emblazoned with the Philippine flag.

Yet, Valdes is doing his patriotic duty by raising money for the Philippine team to augment government funding.

“The PSC tries very hard to support a lot of sports, but there are just too many,” he said.

Valdes approached CEO friends such as Gabriele Boschi of Brand Gateway, Ben Chan of Suyen Corp. and Cris Albert of Fila Philippines, whose brands complement the sport. Then there are other donors such as socialite Grace Ang and Koi Philippines.

His family also has been supportive. Tessa held a garage sale of her gowns. When the Australian coaches came several times to train the team, his son Tyrone gave up his room for them and stayed with his sister Athena.

“It’s exciting to participate in this ‘nonwork’ thing. It makes you realize that, as the cliché goes, the more you give, the more you receive,” he said.

The expenses include pool fees and cross training. Valdes is also raising funds to give some money to the athletes who train 12 to 15 hours a week.

At the start of the training, 20 men and 18 women vied for 12 slots for each team. Those who were eliminated continued to practice just as hard, playing opposition to the national team.

“It changes lives. I’ve seen my athletes become more disciplined because they’ve had to manage their time. They’ve become more mature. When I see how they’ve improved, it makes you feel that this is worth something. I’m getting far more than whatever I’ve put in,” said Valdes.

“When you see the sacrifices of the coaches and players, the family and people chipping in from the goodness of their heart, you realize that it takes a village—another cliché—to mount this.” —CONTRIBUTED