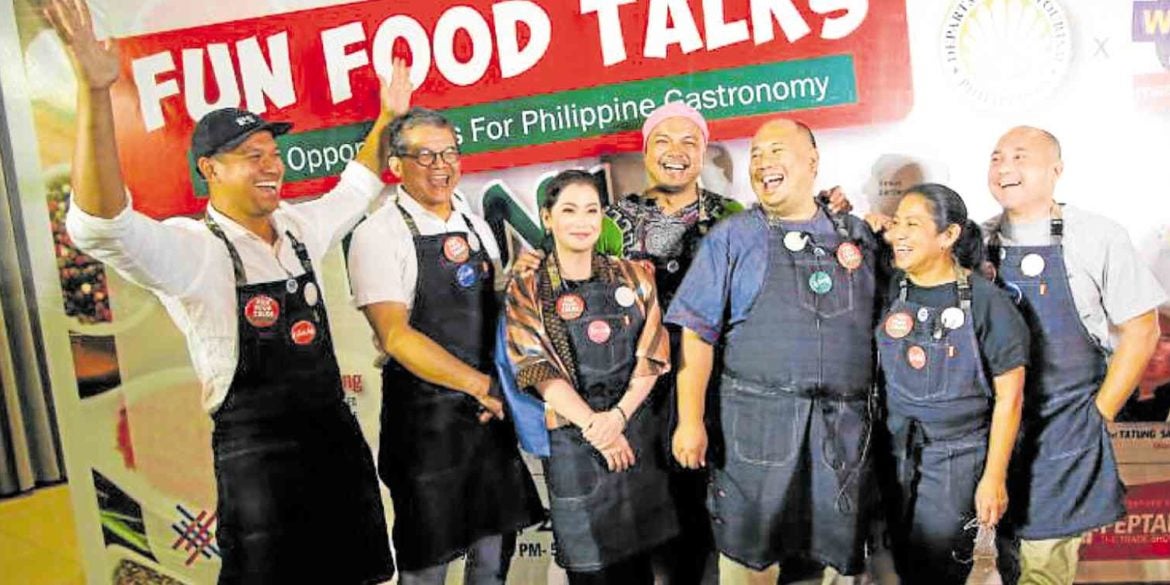 When chefs pick up useful lessons

In cooking, learning never stops. There is always a new technique to master or an ingredient to dissect and play with.

Even highly regarded Michelin-star chefs have a thing or two to pick up from a novice. Through proper cooking demonstration, collaboration or sheer observation, chefs pick up useful lessons they can eventually execute.

Three US-based Filipino chefs who were in the country two weeks ago learned about Philippine cuisine. With the intention to inspire and enable the handpicked chefs to raise the world’s perception and taste of Filipino dishes, the Department of Tourism  created the “Chefs’ Food Trip Project,” which flew in James Beard Award winner Tom Cunanan of Bad Saint Restaurant, chef Charles Olalia of Ma’am Sir in Los Angeles, and cooking show host Grant “Lanai” Tabura  for a series of regional travels that familiarized them with market ingredients, provincial dishes, age-old cooking techniques. They also met with chefs and key people in the F&B industry.

Their itinerary included a tour of the Farmer’s Market hosted by Margarita Forès, a session with Atching Lilian Borromeo, the doyenne of Kapampangan cuisine, at her Kusina Matua, a visit to the Malagos Farmhouse in Davao, a merienda cena in Iloilo prepared by Tibong Jardeleza, and a trek to Bacolod’s popular eateries.

In Pampanga, the chefs were treated to a buffet of provincial food coordinated by Jude Tiotuico, curated by Al Purugganan, and served in the historic 18th-century Hizon House in San Fernando.

The classic morcon and kilayin were also served but the chefs showed interest in the burung babi, fermented pork belly that has been fried and served with fermented rice.

Local industry people and culinary students learned from them by attending symposiums in the provinces they visited.

On a recent trip to Tokyo, I got the chance to collaborate on a two-night dinner with Kenji Kawasaki of 5-month-old restaurant Last Note. To promote my latest cookbook, “Also Filipino: 75 Regional Dishes I Never Had Growing Up,” I introduced regional dishes in the seven-course tasting menu, such as poqui-poqui from Ilocos; Mindanao’s tiyula itum, a beef soup cooked with burnt coconut and lemongrass; and paralosdos, Bulacan’s stripped-down version of ginataan.

I shared with Kawasaki the Filipino dishes while I learned discipline and dedication from him.

The 39-year-old chef runs the restaurant operations by himself. He takes reservations, purchases ingredients, preps and serves the dishes, and cleans up at the end of the day—six days a week.

He told me that he usually closes up and heads home at 2 a.m. after punching the day’s numbers in his sales chart.

There’s much to admire from this humble and hardworking chef who wears his passion for the craft on his sleeve.

Josh Boutwood has only good words to say about Michelin-star Japanese chef Michihiro Haruta whom he recently collaborated with at Helm.

On Nov. 23, the two produced a tasting menu that showcased their skills and flair for balancing flavors.

There was gently flattened scallop topped with caviar then dressed with kabosu, a popular citrus fruit in Japan. It was followed by Boutwood’s abalone with green peas, and chopped cured amberjack on a wafer-thin cracker.

Haruta served his Japanese sake sourdough bread with butter mixed with sake chase or the lees left from the alcoholic production, as well as squab, cabbage and ume (Japanese plums).

Their tandem, like their culinary style, was flawless, with each dish blending perfectly with what came before it.

Boutwood said they share a philosophy where less is more, which is why they worked well together.

“What’s noteworthy was his level of detail given the minimal ingredients. It’s inspiring,” he added.